If you missed it, things got awkward Sunday night when La La Land was accidently named as the winner of Best Picture by Warren Beatty and Faye Dunaway. Turns out, the winner was actually Moonlight, and the world only realized once the moviemakers were painfully... 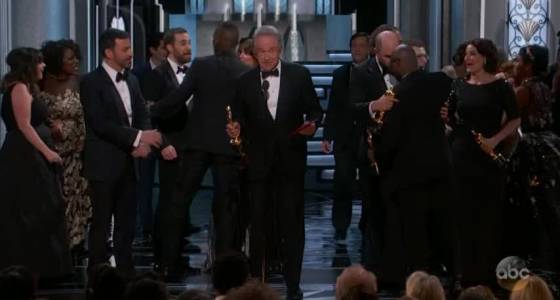 If you missed it, things got awkward Sunday night when La La Land was accidently named as the winner of Best Picture by Warren Beatty and Faye Dunaway. Turns out, the winner was actually Moonlight, and the world only realized once the moviemakers were painfully far into their acceptance speeches.

There was La La Land producer Jordan Horowitz, who had to take on the awkward task of breaking the news to a stunned audience that Moonlight actually won. And producer Fred Berger, who was in the middle of thanking his family when he turned around, figured out what happened, and quickly remarked, “we lost, by the way.”

Jenkins appeared so perplexed by the craziness of it all that he voiced his shock before wandering away from the microphone. “Even in my dreams this could not be true,” he said. “But to hell with dreams, I’m done with it because this is true. Oh my goodness.”

Faye Dunaway, the one who actually presented the misplaced award in the first place, stood at a table nursing a cocktail at the Vanity Fair party in Beverly Hills, chatting with various men as though nothing amiss had happened at all.

Celebrities had a whole lot of fun reacting to it on Twitter.

Here’s what the twitterverse had to say:

Since political undertones dominated the Oscars throughout, it’s no surprise that the jokes started getting political as well:

The dialogue went beyond just laughing about the mix up though. People wondered how this mixup actually happened. Some screenshots appear to show that Warren Beatty, who was supposed to announce the winner, was handed the envelope for Best Actress instead of Best Picture.

Another shot appears to show that Leonardo Dicaprio, who presented the previous award, held on to the envelope instead of handing it to Emma Stone, which may have spurred the confusion.

Either way, people had some choice ways to describe what must have been going through Beatty’s head.

PricewaterhouseCoopers, the company responsible for the Oscars envelopes,has since apologized for the chaos.

“We sincerely apologize to ‘Moonlight,’ ‘La La Land,’ Warren Beatty, Faye Dunaway, and Oscar viewers for the error that was made during the award announcement for Best Picture,” PricewaterhouseCoopers said in a statement.

“The presenters had mistakenly been given the wrong category envelope and when discovered, was immediately corrected. We are currently investigating how this could have happened, and deeply regret that this occurred. We appreciate the grace with which the nominees, the Academy, ABC, and Jimmy Kimmel handled the situation.”