The voices behind the characters of "Moana" livened the Oscar stage on Sunday night, with "Moana" actress Auli'i Cravalho and one of the film's music writers, Lin-Manuel Miranda, performing the Academy Award-nominated song "How... 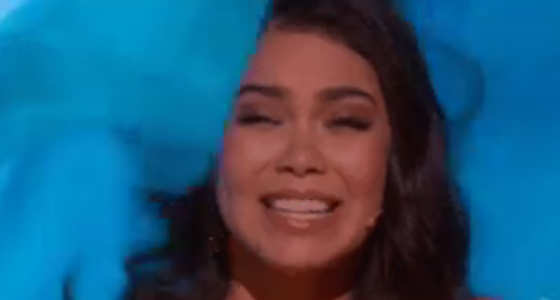 The voices behind the characters of "Moana" livened the Oscar stage on Sunday night, with "Moana" actress Auli'i Cravalho and one of the film's music writers, Lin-Manuel Miranda, performing the Academy Award-nominated song "How Far I'll Go."

Miranda, who Dwayne Johnson introduced as his "twin," rapped an original prologue before Cravalho, 16, took over singing duties as dancers -- clad in blue attire -- brought the film to life on stage, creating an oceanic look with scarves. Despite her vocal prowess, the performance had a hiccup as one of the ribbon twirlers hit Cravalho on the head with her prop. The newcomer -- already a pro -- barely filched.

Miranda, the mastermind behind "Hamilton" is competing for best original song -- up against other Broadway composers, including Benj Pasek and John Paul, who wrote lyrics to Justin Hurwitz's music for two of this year's nominated songs, "City of Stars" and "Audition (The Fools Who Dream)" from "La La Land." It's also up against "The Empty Chair" from "Jim: The James Foley Story" and "Can't Stop the Feeling!" from "Trolls."

If Miranda takes home the best song award for "How Far I'll Go," he'll earn the elusive EGOT -- Emmy, Grammy, Oscar, and Tony Awards -- and join the even more select group of people who have also won a Pulitzer Prize.

"How Far I'll Go," is considered the "I Want" song, a tune typically sung by the main character in Disney animated musicals that describes their dissatisfaction with their current life, and their hopes for a new life in the near future. It's akin to "Part of Your World" from "The Little Mermaid" and "Just Around the Riverbend" from "Pocahontas." But "How Far I'll Go" stretches those boundaries, as Moana sings in longing for personal growth, as a 16-year-old girl who wants to venture out and become better for her own world.