CaptionCloseBARCELONA, Spain (AP) — Remember all those crazed Pokemon Go seekers that roamed our city streets, crowded our public parks or ventured into rural areas in search of virtual-reality pocket monsters popping up on their smartphones?It seems... 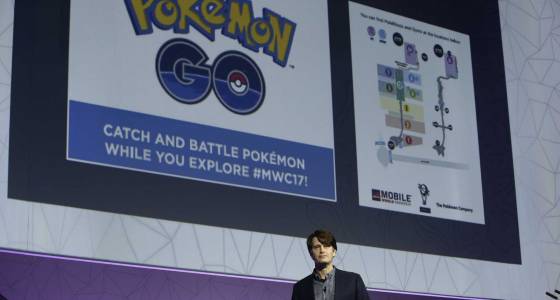 BARCELONA, Spain (AP) — Remember all those crazed Pokemon Go seekers that roamed our city streets, crowded our public parks or ventured into rural areas in search of virtual-reality pocket monsters popping up on their smartphones?

It seems like ages ago, but it was only last summer that the game developed by the San Francisco-based company Niantic turned into a global phenomenon, sending legions of players into a worldwide frantic hunt of popular Asian cartoon characters.

Today? Not so much.

Those stunning scenes of urban stampedes are basically over, and user numbers have reportedly plummeted, but that doesn't mean that Pokemon Go was just a fad, according to Niantic CEO John Hanke.

"I think you should go check your data. Look at the top grossing apps on Google Play and Apple and check the charts, then form your own opinion," Hanke told The Associated Press Tuesday after his keynote speech at the Mobile World Congress in Barcelona.

"What happened last summer was really kind of strange, where Pokemon Go spiraled out of control to this level of cultural awareness that nobody expected, certainly not us. What happened after that is that it became an extremely successful mobile game and product, just based on the number of daily active users and monthly active users."

Niantic was originally founded as a start-up within Google, where Hanke developed Google Maps, but went independent in 2015 while keeping the multinational technology giant as one of its main investors.

Most people associate augmented-reality smartphone apps with Pokemon Go, which allows players to feel like they're catching monsters in the real world when they appear on their phones. But the number of games and competition is growing.

Hanke vowed to keep going strong, though, announcing the addition of new Pokemon characters, as well as a new version of the game that preceded Pokemon Go, the popular Ingress.

One common complaint among non-Pokemon Go enthusiasts related to security hazards the game exposed citizens to. Reports also ranged from annoyed storeowners to reproaches of littering by the sudden influx of players leaving trash behind in parks, resulting sometimes in new ordinances requiring gaming companies to pay a fee to help with upkeep. Game developers, on the other hand, warned that restrictions could harm the growth of the bulging technology industry.

"I haven't heard complaints about stampedes of people. ... In certain places, there were a few complaints about littering, but I chalk that up to this being a brand new consumer experience that nobody had any knowledge about how to prepare for in the past," Hanke said.

The Niantic chief insisted that the new virtual-reality world will still take some getting used to, and that Pokemon Go will have a leading role in the evolution of its gaming products.

"The usage is at a more normal level for one thing, but people will now understand what it is and won't be surprised necessarily when hundreds of people gather in the parks for no other reason than looking at their phones and playing Pokemon Go," Hanke said.

"As in the past, we will be launching our in-games live events and all new kinds of customized apparel for trainers. We also have three additional major releases planned throughout the year and one of those is going to bring stuff users have been clamoring for," Hanke concluded.