Dubai: Traffic has come to a standstill along all the major roads of Dubai and Sharjah as incessant rains lashed the emirates on Sunday.Several accidents were reported on the highways including Shaikh Zayed Road, Mohammad Bin Zayed Road as well as other arteries.Brigadier... 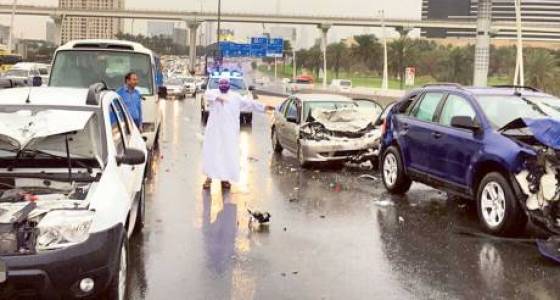 Dubai: Traffic has come to a standstill along all the major roads of Dubai and Sharjah as incessant rains lashed the emirates on Sunday.

Several accidents were reported on the highways including Shaikh Zayed Road, Mohammad Bin Zayed Road as well as other arteries.

“One driver seriously injured and four people suffered minor injuries," he said. The accident cause major traffic jam from World Trade Center roundabout till the bridge.

“Other minor accidents happened in the city, causing delays on roads,” he added.

While people have enjoyed the extended wet spell experienced by the emirates, the weather seems to have impacted the traffic adversely.

Motorists heading back from work were the worst affected as continued rains slowed down the vehicular movement tailing back to several kilometres.

Roads connecting Sharjah and Dubai, including Ittihad road, Beirut street as well as Emirates road saw a heavier than usual volume of traffic with residents experiencing delays by more than an hour.