The fear of the coronavirus postpone the Paris Marathon for October 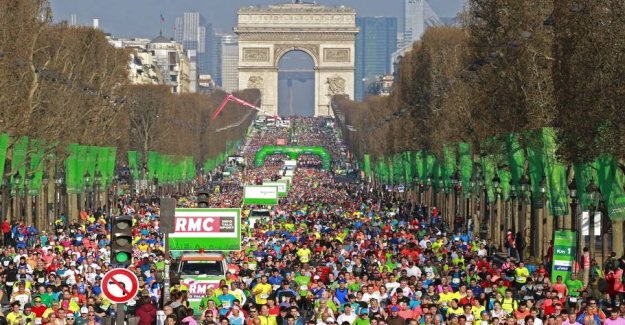 the Paris Marathon has been postponed to October as a result of the infectious coronavirus.

It informs the organizers in a statement.

the Paris Marathon with the official name of the Schneider Electric Marathon de Paris is supposed to have taken place on Sunday the 5. april, but because of the virusudbruddet it has been moved to Sunday the 18. October.

the 60,000 runners have according to the organizers signed up for the Paris Marathon.

Last weekend's half-marathon in the French capital has also been deferred for fear of coronavirusset, worldwide, have cost the lives of over 3300 people have lost their lives since January.

the Paris half marathon is now scheduled for Sunday, February 6. september.

- Immediately after the cancellation of the Paris half-marathon less than 24 hours before the start, met the parties from the city of Paris and the Amaury Sport Organization (organizer of major sporting events, ed.) in order to find a new date for the race.

We are pleased to announce that halvmaratonet will take place on the 6. september, informs the Amaury Sport Organization (ASO) in a statement.

the Announcement comes after the French government on Saturday gave the message that all events with more than 5000 people gathered to be voided.

on Thursday informed the French ministry of health that two more people have died of the coronavirus in the country. It brings the total number of deaths as a result of the virus up to six in France.

at the same time, recorded 92 new cases of corona virus since Wednesday.

This is the largest increase in the number of new cases on a single day in France, since the outbreak began.

In all, 377 people in France confirmed infected with the coronavirus.

The Danish ministry of foreign affairs updated on Thursday evening rejsevejledningen in France as a result of virusudbruddet in the country.

Here, everyone is encouraged to exercise extra caution while traveling to France as well as a number of other countries.