Kherson has become the battlefront; there is no longer any safe place in the city. 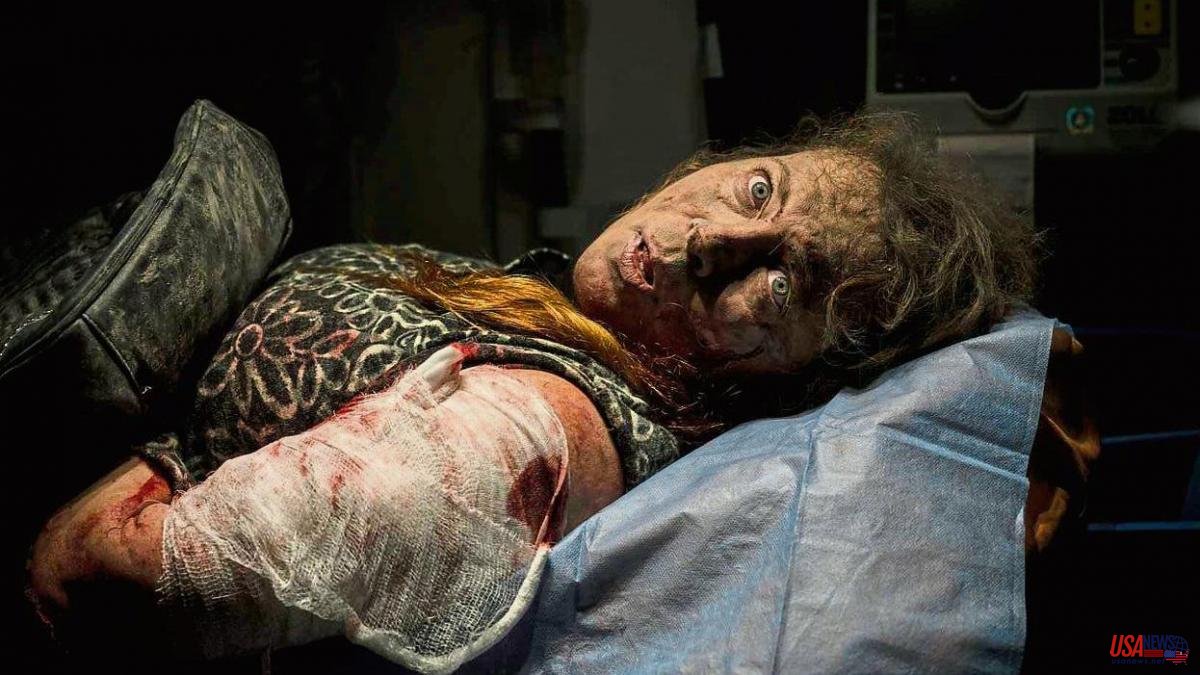 Kherson has become the battlefront; there is no longer any safe place in the city. Residential complexes are not, and even less are public places where the population queues daily in search of products they need for their survival, such as the only large chain supermarket that, with great fanfare, reopened days ago. Last Friday, when the clock marked noon, two missiles fell within a hundred meters; one of them in the middle of a square through which all vehicles entering the city have to pass. The windows of the facade were broken; some customers who were waiting to access the premises were injured.

An elderly woman wearing a pink coat did not survive. Nothing could be done by the emergency services that arrived minutes later. The same fate befell another man who collapsed just a few meters away. "It is very sad; for months we waited and waited for our forces to return to Kherson, and now that we were calm they attacked us non-stop.” The words are from Anastasia, a 48-year-old woman who was on her way to the supermarket when the explosion occurred. She doesn't plan to leave. For the moment he will stay – “We believe in our forces, we hope for victory”, he says – but the same is not the case with dozens of people who, as new missiles fall and the city is attacked with artillery, are desperately looking for a way to go out In the lists that circulate in the messaging applications, the different organizations that offer the evacuation service are informed. To Mikolaiv, to Odessa, to Kyiv... it doesn't matter.

"Four days ago we received forty requests a day, today we have evacuated 120 and there are more waiting," explained Volodimir yesterday at the bus station in Mikolaiv, the nearest city, where he had transported twenty people in one of the minibuses of the Help People organization, dedicated to evacuations.

One of the passengers, Natalia, did not have time to buy a box to transport her cat, she carried it in a supermarket bag in which she had opened two small holes. Until Thursday she never considered leaving town. She had ignored the invitation from the authorities, who have offered the population (two weeks ago there were 80,000 people) to relocate to other provinces while the winter passes. She was willing to live without electricity, water and heat for as long as it took. Russian forces blew up the infrastructure when they withdrew on November 11, and authorities have been in a race to restore service ever since.

Yesterday Oleksandr Tolokonmikov, director of Kherson's Internal Policy department, confirmed that they had managed to connect the city to the electricity grid. "For the moment it has been reestablished in some places on the outskirts and strategic places, and little by little we are going to reestablish it throughout the city," he assured.

The return of light also means the return of water and heating now that the cold increases. “We don't pressure them to leave the city, but we do warn them that they have an evacuation center where they can call for help,” explains Tolokonmikov, who acknowledges the difficulties of living in Kherson. For example, pharmacies do not work, and whoever needs medicine has to go to the hospital, where they are provided free of charge.

“It was panic. After that we decided to leave”, explains Natalia, the woman with the cat, who made the decision to leave after a missile fell on a neighboring house on Thursday. Another hit a nearby car, which was burned. Most of the surrounding houses were left with broken windows, a scene that is repeated wherever a Russian missile or projectile hits. “I hope to return soon, it's my house,” she says.

Artillery exchange has been a constant in Kherson since the Russians abandoned the city under pressure from Ukrainian forces and relocated to the other side of the Dnieper River. Currently they have erected their defenses 10 miles from shore, which they have completely mined. From there they launch attacks that have been increasing considerably in the last week. Until last Friday, 15 people had died – five of them on Thursday, the most difficult day – and 35 had been injured. "This is revenge for those who lost," President Volodimir Zelensky said a few days ago when he was referring to the situation in Kherson. On Friday, the authorities ordered the evacuation of hospitalized children and also psychiatric patients.

“Ukraine does not have the capability to stop those missiles and artillery with which they attack Khershon, as the distances are very short,” explains Commander Dmitri Pletenchuk, who is part of the Khershon military command. For that they would need a defense system like the Iron Dome used by Israel. He assures that the Ukrainians will continue with the counteroffensive, but that the situation in which the city may remain is uncertain.

“When the invaders were here, our fear was to go out into the street, see them with their weapons and not know who they were going to attack. Who were they going to shoot at, who were they going to take away, ”explains Valentina, 62, who arrived in Mykolaiv yesterday with her daughter and, like many others, also with her cat. The people of Kherson acknowledge that the war until now has been different for them. After all, they came under Russian rule very early on. “When the internet was working, we could find out what was going on,” she adds.

Tatiana, who also decided to leave the city, but by train, ironically explained that when the Russians were in the city there were Ukrainian attacks, but they were very "precise" in the targets they chose. “I never heard of a civilian being killed. We were afraid, but very different, ”explained this woman who, together with her sister, arrived at the station on Thursday to take the train to Kyiv.

“We haven't slept for two nights, we can't stand it. These people have lost their minds, ”he confessed. Like hundreds of people who crowd the station every day, they did not have a ticket. Officials let them pass as long as there are free seats. Before boarding, they have to answer the questions of several Ukrainian intelligence men who review the documents, check in the system that they are not wanted, ask them questions.

Since the retake of Kherson, the Ukrainian authorities have been searching for the so-called collaborators. Many of them left with the Russians, but hundreds are believed to remain in the city. “I am displaced from Donbass, I don't want to have to move again. I will do everything possible to resist”, said Larisa, one of the women who has the task of registering those who leave. Which are hundreds. So much so that the number of wagons has had to increase. On Thursday they were 18, on Friday 21.

But every day there are more who want to leave.