The Norwegian Tobias Foss has given the big surprise in the individual time trial of the Road Cycling World Championships that started this Sunday in the Australian town of Wollongong, near Sydney, in the state of New South Wales, and has won gold ahead of the big favorites. 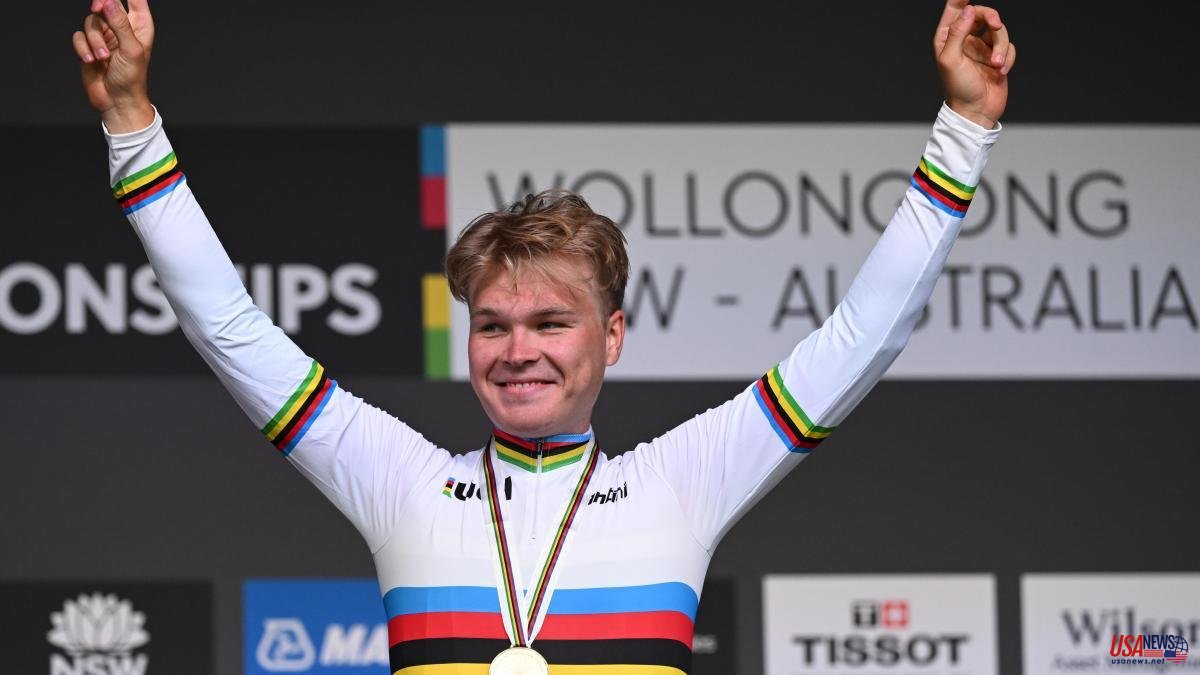 The Norwegian Tobias Foss has given the big surprise in the individual time trial of the Road Cycling World Championships that started this Sunday in the Australian town of Wollongong, near Sydney, in the state of New South Wales, and has won gold ahead of the big favorites.

"It's like a dream. I still can't believe it. I was thinking of finishing in the top ten or top five, but I didn't expect this," said Foss, still surprised, who confessed that it will be "very special to wear the rainbow jersey". "I will honor him to the best of my ability," he advanced.

Foss, 25, ended up winning by just three seconds the Swiss Stefan Kung, who dominated from the beginning, after a race from less to more in which he set the fourth fastest time in the first time reference and the second in the second. At km.7.2 he gave up two seconds to Kung and at 24.5 he lost 12 seconds compared to the European runner-up and World Cup bronze medalist in 2020 in Imola (Italy).

In the end, the Norwegian, teammate on the Jumbo Visma of Olympic champion Primoz Roglic and 2022 Tour de France winner Jonas Vingegaard, beat Kung's time to finish the 34.2kms. of technical and full of curves of the Wollongong street circuit in a time of 40 minutes and 2 seconds, at 51.241 kms. per hour.

The Swiss endured at least silver and the Belgian Remco Evenepoel, this one 9 seconds behind Foss, repeated the 2021 bronze at home, in Flanders, confirming the good form that led him to win the Vuelta a España two weeks ago 2022.

Outside the podium, the British Ethan Hayter could have cost him a medal due to a breakdown he suffered, although he finished fourth, 40 seconds behind the winner.

Much more disappointing was the performance of double world champion Filippo Ganna, surprising seventh when he is considering breaking the hour record. The Italian, on the podium in the last three editions and champion in 2020 and 2021, lost almost a minute, 56 seconds over Foss.

Ganna was not the only one who disappointed, although he was the most, since the Slovenian Tadej Pogacar, double winner of the Tour in 2020 and 2021, could not recover from the 2022 defeat in the French test finishing sixth, just ahead of the favorite Italian, 48 seconds behind the champion and half a minute off the podium.

Without being bad, it was not the brightest day for the Swiss Stefan Bissegger, European champion and fifth in Wollongong, 47 seconds behind the first. And the Belgian Yves Lampaert and the Frenchman Rémi Cavagna, ninth and eleventh, did not shine at the height of his power in the specialty. The Top10 was completed by the Portuguese Nelson Oliveira, outstanding eighth, and the Frenchman Bruno Armirail, tenth.

Oier Lazkano, from Vitoria, the only Spaniard in the running, was twenty-ninth, 3.09 behind Foss and two places ahead of Colombian Rodrigo Contreras, thirty-first at 3.22.

The Dutch cyclist has dominated the 34.2 km test from start to finish. in an urban circuit full of curves that has finished in a time of 44 minutes and 28 seconds, at an average of 46,012 kms. per hour. The Dutchwoman was accompanied on the podium by the Australian Grace Brown and the Swiss Marlen Reusser, whom she surpassed by 15 and 42 seconds, respectively.

Also Dutch Annemiek van Vleuten, the Movistar rider who has dominated the entire season winning the Giro, the Tour and the Vuelta, could not round off her great season. Van Vleuten finished seventh, behind Italian Vittoria Guazzini and Americans Leah Thomas and Kristen Faulkner, fourth, fifth and sixth, respectively.

The Spaniards, Sandra Alonso from Alicante and Lourdes Oyarbide from Alava, finished in positions 31 and 32, 6.19 and 6.22 behind the winner. Just behind the Colombian Lina Marcela Hernández, thirtieth at 5.31. Further back finished the Argentine Luciana Roland, thirty-sixth, and the Chilean Catalina Anais Soto did not finish.