The legacy of Tàpies (and some of the Beatles)

The ten years that have passed since the death of Antoni Tàpies (Barcelona, ​​1923-2012) and his wife, Teresa Barba, have not been fortunate for their legacy. 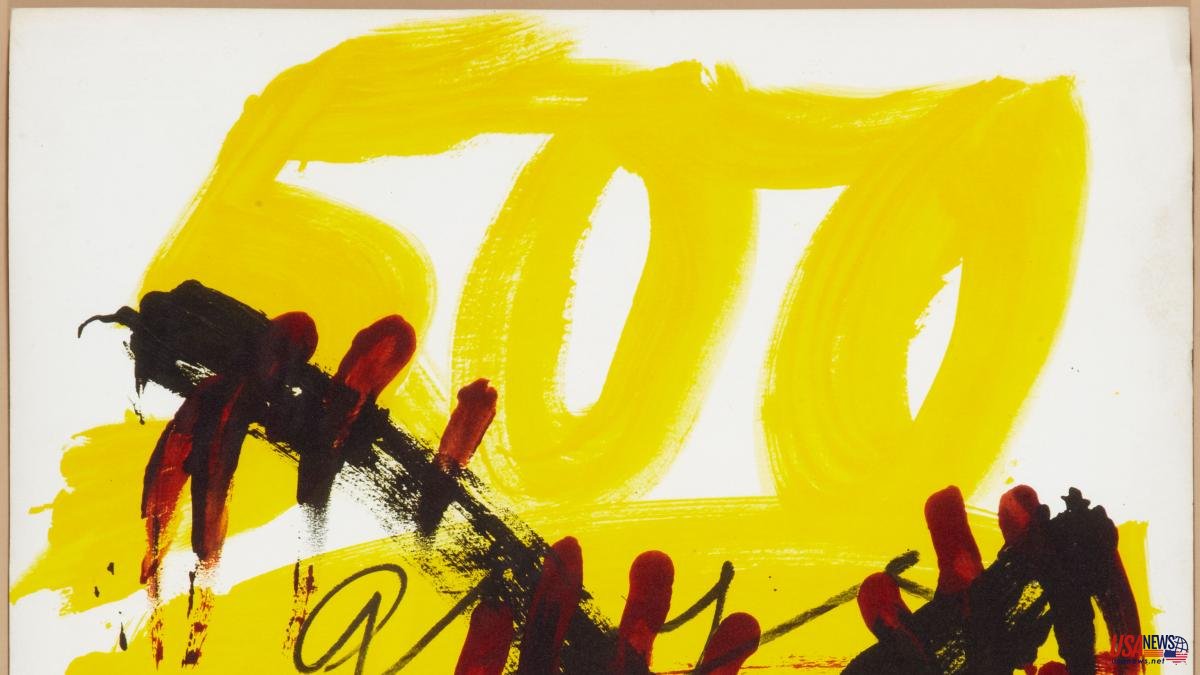 The ten years that have passed since the death of Antoni Tàpies (Barcelona, ​​1923-2012) and his wife, Teresa Barba, have not been fortunate for their legacy. To begin with, the gallery of his son, Toni Tàpies, who was in charge of promoting him, is closed. And to say that the Fundació Antoni Tàpies has been working at half speed lately would be a white lie. Interesting exhibitions and activities are sometimes presented, but the lack of continuity, budget and direction is worrying and the comparison with the past is negative.

During the first period of the Foundation, under the direction of Manuel Borja-Villel, splendid exhibitions were presented there, such as Comunicació sobre el mur and Celebració de la mel, and also in a context of excellent temporary exhibitions: Louise Bourgeois, Asger Jorn, Ana Mendieta, experimental cinema, etc. And, on the other hand, in recent years the dissemination of Tàpies' work in Barcelona galleries has been low. Hence the importance of the Antoni Tàpies exhibition. Matèria i esperit, presented by Jordi Pascual in his new and spacious space on Calle Enric Granados, until the end of September (August closed).

It is an inaugural exhibition, which opens the new, more ambitious stage of the Jordi Pascual gallery. The selection is generous and includes large format paintings, such as Negre i oli (1982), Gran ocell (1983) or Dues sandàlies (1985), among others, along with smaller but significant works, such as the dark Petita M negra (1979), Drawing by Lilith by J.E. Cirlot (1949) or Great Eye (1992).

The 80th anniversary of Paul McCartney, which was celebrated on June 18, has been celebrated in the media, sometimes with accurate texts. However, it has surprised me that, when asked about their favorite McCartney songs, some active musician has confessed that he knows little about his work. In addition, some reviewers detect too much sugar in it. Sure?...

Well, I hate too much sweetness in pastry and music, and yet I love McCartney's contribution to the Beatles. It is necessary to distinguish beyond the Lennon-McCartney credits, which are almost never true and are misleading. We'll see. Yesterday is one hundred percent McCartney and it seems to me the best love song of the Beatles, for lyrics and for music. The fool on the hill and Blackbird are two wonders of his, celebrating freedom, resistance and poetry, despite everything else.

The Beatles' connection with the harmonies and with the richness of timbres of classical music is a personal contribution of Paul -aided by George Martin and other collaborators-, and he is outstanding in compositions with Lennon and the others such as A day in the life, and on Paul's own songs like Eleanor Rigby and For no one. The latter deserved to be in the Beatles' red and blue anthology, as well as Because, which was Lennon's.

If prizes were awarded for joy, McCartney would win more than one, for pop melody, for vital lyrics and for tonic sound, with songs of euphoric love like I saw her standing there and All my loving, vacilones like Drive my car or nostalgic like Your mother should know. McCartney's romanticism is at its best youthful in And I Love Her (composed on guitar by Harrison, who doesn't sign the piece), it's unconditional in Here, There and Everywhere, and it has great mature variants in We Can Work It Out. and Two of us.

The Beatles did not say goodbye with Let it be, but with McCartney's suite for Abbey Road, which contained, among other gems, You never give me your money and Golden slumbers. It is true that McCartney gave his best with the Beatles, while Lennon and Harrison continued to improve. From Paul solo my favorite song is the euphoric Monkberry moon delight, despite its crazy lyrics. How would an octogenarian version sound with slightly better lyrics?