The hooligan kids of Leo Messi

"When you stop changing, everything ends". 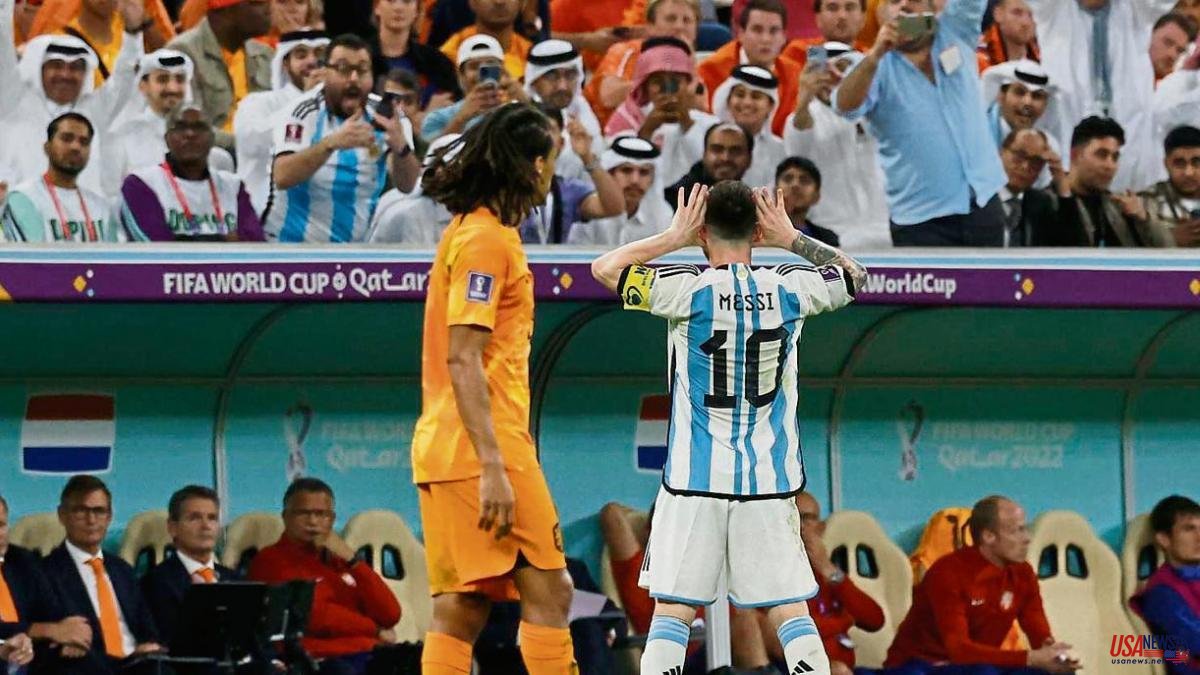 "When you stop changing, everything ends"

Congratulations Leo. You are no longer a cold chest. Messi won his penultimate battle, winning the minds and hearts of that half of his compatriots who doubted his Argentine identity. He found the Maradona vein in him. He insulted the rivals, despised the referee, mocked in the face of a 71-year-old man with cancer.

Now all he needs to do is win the World Cup scoring a goal with his hand so that he can be placed there in the Albiceleste Olympus with Diego, Evita and Carlitos Gardel.

I'm referring, in case anyone hasn't been paying attention, to the street fight that turned into the quarterfinal match of the World Cup last Friday between Argentina and the Netherlands.

The man Messi made fun of, just after scoring his team's second goal, was the Dutch coach, Louis van Gaal. As anyone who knows him knows, Van Gaal has more moral fiber in a hair on his left eyebrow than Messi does from head to toe. He is clumsy the Dutchman, but he is ethical. No other coach in Qatar criticized FIFA's grotesque decision to hold the World Cup in a country whose only virtue is to have as many gas dollars as grains of sand as he did. Van Gaal would never sell himself as a "tourism ambassador" to a tyranny that executes in bulk, or dismembers, his political opponents.

But the worst was later, after the lottery of the penalty shootout, when the winners typically put themselves even a little in the skin of the losers and offer them a gesture of compassion, as the Croatian captain Luka Modric did a few hours before with his Brazilian teammate from Real Madrid Rodrygo.

You know how Messi and company responded to the heartbroken Dutch, including Messi's former teammate Frenkie de Jong. They celebrated his pain, delved into his wounds with more cruel taunts, more scoundrel faces and then, in media interviews, with insults of spoiled children.

"What are you looking at, fool?" Messi told Wout Weghorst, who scored both Dutch goals, when he approached him to try to shake his hand. There Messi surpassed Maradona, who after beating the English "pirates" in the 1986 World Cup, four years after the Falklands war, had elegant words for the enemy.

Anyone who knows me knows that all my life in the World Cups I have been a stalwart of Argentina, where I sucked at soccer from an early age. Unconditional of Messi, too, until I found out recently that he had sold his soul to Saudi Arabia. But my devotion to Messi the player, the one who has given me so much joy, lasted long enough for me to continue hoping that the career of the best player of the 21st century would be crowned with the conquest of the World Cup when the World Cup began in Qatar.

I'm not so clear anymore.

Being a soccer fan is also a moral exercise. Many, most, never doubt their tribal affiliation. They keep the faith with the stubbornness of the prophet Job, or like the Americans whose devotion to Donald Trump would remain intact, even if he were proven to be a serial killer. But there are cases of people who, when circumstances change, change their minds. More in football, perhaps, than in politics. I am not referring so much to the style of play, or to the wins or losses, but to the values ​​that one imagines that his team represents, a factor that is not irrelevant – although rarely examined – in the mental processes of a fan.

My mind is today faced with a dilemma. I understand that to compensate for the abysmal lack of talent, Messi aside, the Argentine team sees the need to resort to hooligan solidarity. But do I still want to identify with such a rabble? I don't know.

When the semifinal starts tonight against Modric's Croatia I will feel it in my bones, I suppose. Or maybe before, when I play the Argentine anthem that I sang every morning at school in Buenos Aires when I was a kid. I will remember, without a doubt, that Messi has a lot of accumulated credit. In spite of everything, I keep hoping that he takes the last trophy he has left to win.

Another, less praiseworthy, reason for wanting Argentina to advance to the final is that if Messi and his children behave as they do when they win, if they lose they will behave very, very badly.