The Celtics cancel Miami and tie the final of the East

An irrepressible Jayson Tatum, with 31 points, eight rebounds and five assists in 33 minutes, led a tremendous team performance by the Boston Celtics, who beat the Miami Heat (102-82) at TD Garden and equaled two the Eastern Conference finals. 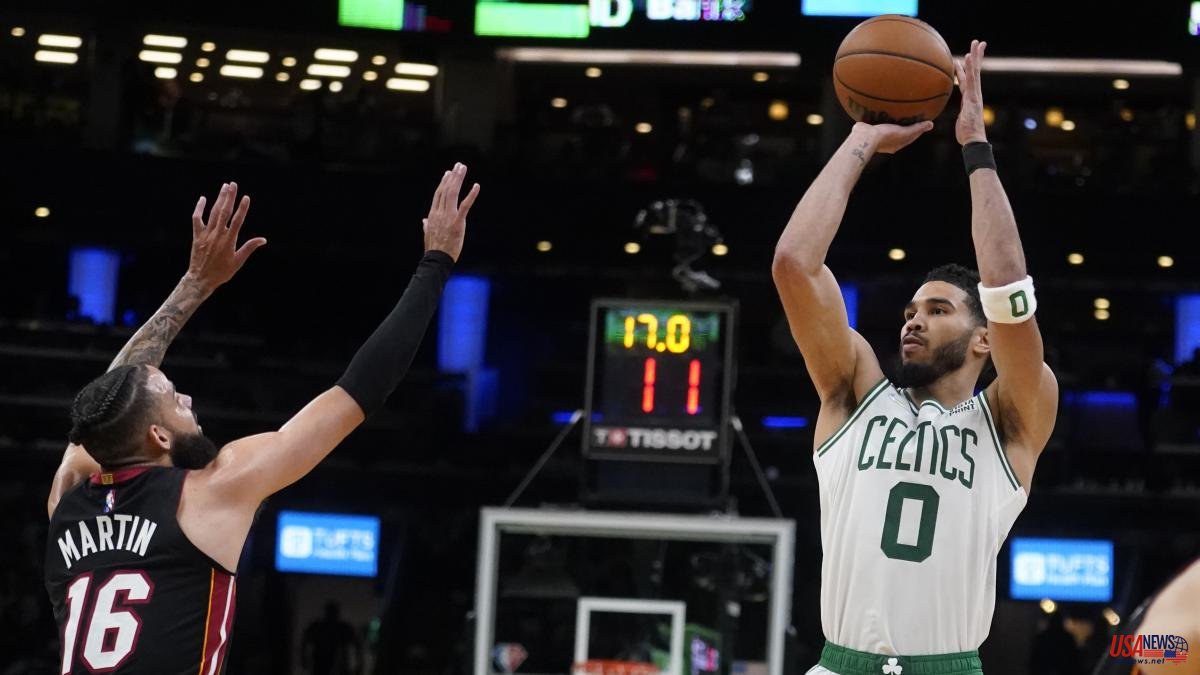 An irrepressible Jayson Tatum, with 31 points, eight rebounds and five assists in 33 minutes, led a tremendous team performance by the Boston Celtics, who beat the Miami Heat (102-82) at TD Garden and equaled two the Eastern Conference finals.

Tatum went from the ten points scored 48 hours earlier in the resounding setback (127-102) suffered against the Heat to lighting up the Garden with spectacular plays, on a night in which the Celtics showed all their power on both sides of the track, despite the loss of Marcus Smart, who had finished the third game with severe ankle pain.

Ime Udoka's team, who is making history as a debut coach in the NBA, was also able to count on an outstanding performance by Dominican Al Horford, who dominated in the paint, with five points, thirteen rebounds and four key shots to completely deactivate the Heats.

Five Celtics players finished in double figures against a Heat that paid for the loss of Tyler Herro, best sixth man of the season, and the improvable physical condition of leaders like Jimmy Butler and Kyle Lowry.

Butler scored six points in 27 minutes and Lowry just three in 21 minutes. It was Victor Oladipo, who is recovering continuity after recent seasons weighed down by injuries, the Heat's leading scorer with 23 points, four rebounds and six assists. The Heat's starting five, made up of Butler, Lowry, Adebayo, Max Strus and PJ Tucker, only scored 18 points, which is the worst mark in the playoffs since the 1970-1971 season.

The start of the game was already a foretaste of the fateful night for the Heat, who needed fifteen attempts to get their first points from the field (1 of 15). The first point came from the free throw line, the work of Bam Adebayo, while it was Oladipo, coming off the bench, who connected the first field goal, after almost nine minutes of the game.

The dominance in points, rebounds (19-8) and determination in the divided balls did not satisfy the hunger of the Celtics, who built a 57-33 lead at halftime with a Tatum who at that time was already close to double-double (24 points and 8 rebounds).

The advantage of Ime Udoka's men reached 32 points in the third quarter and the Heat could not raise their heads, despite cutting the margin at times to 23 points. The 76-52 with which the Celtics entered the last period and the opening triples of Payton Pritchard and Al Horford dashed all kinds of hopes of a comeback for the Heat.

The last minutes turned into a party in the Garden, with Horford sealing a tremendous block to Gabe Vincent and Pritchard signing the 88-57 that again put more than thirty points in between, with eight minutes to play. On Thursday the Celtics will visit Miami in Game 5 with everything to be decided.