Technology and diversification, keys to the energy transition 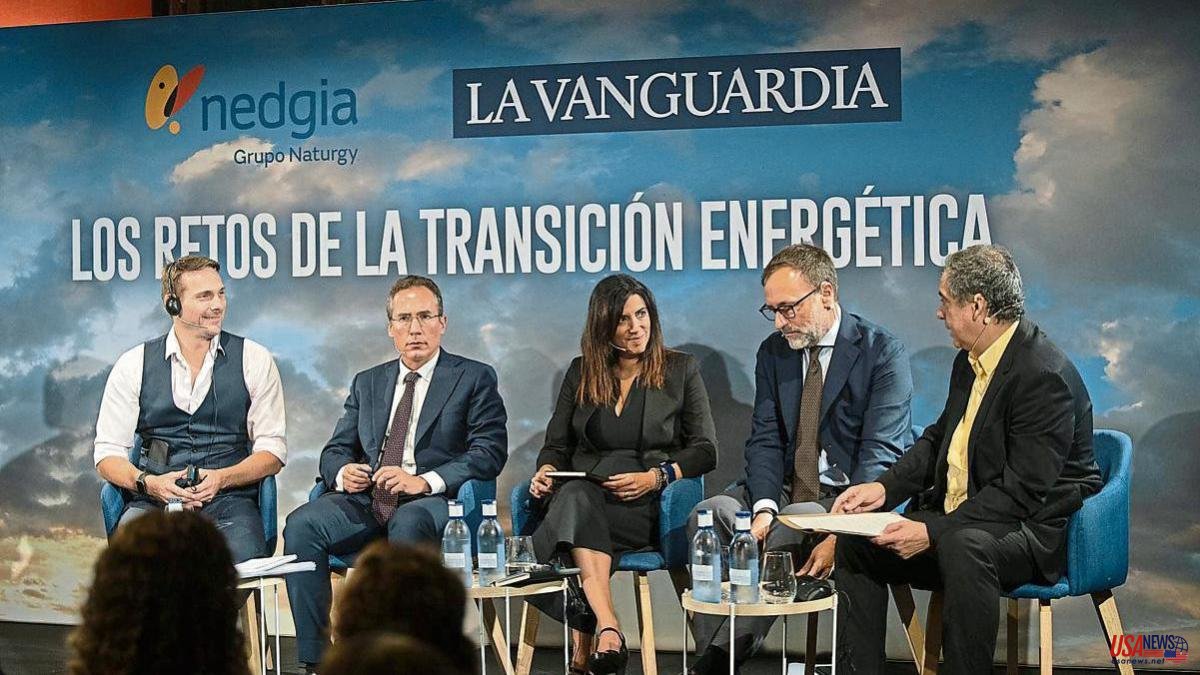 The energy transition requires the combination of energy sources to ensure supply and sustainability, preserving family economies. The transformation of the model advances in parallel with the development of the technologies of the so-called fourth industrial revolution, especially artificial intelligence, which facilitates decision-making in the field of energy.

The need to find solutions for the transformation of the energy model in a context of ecological and geopolitical crisis, marked by the climatic emergency and the effects of the war in Ukraine, which has revealed Europe's dependence on Russian fossil fuels, is urgent , as the participants in the Vanguardia talks panel on “the challenges of the energy transition” have agreed on

The event, held at the Barcelona Equestrian Circle, featured speeches by the futuristic technology and energy communicator Matthew Griffin; the counselor of the National Commission of Markets and Competition (CNMC) Pep Salas; the president of the Clúster de l'energia eficient de Catalunya, Esther Izquierdo, and the CEO of Nedgia, gas distributor of the Naturgy group, Narcís de Carreras, moderated by the deputy director of the newspaper Enric Sierra, with the aim of addressing the challenge energy, with the short-term horizon set on the arrival of next winter.

The context is marked by the “post-Covid impact”, which “has exposed the great deficits in energy policy of the last 20 years”, regrets the CEO of Nedgia, Narcís de Carreras. The war in Ukraine, moreover, has been "the straw that breaks the camel's back" because "it destabilizes the system". The director of Nedgia, which distributes 70% of the natural gas in Spain, recalls that "Russia produces 20% of the world's gas and more than 10% of the oil".

According to the Eurobarometer, 85% of Europeans believe that the European Union should reduce its dependence on Russian oil and gas. In response to the threat posed to the stability of the world energy market by Russia's invasion of Ukraine, the European Commission has launched the plan to end this dependency of the EU on Russian fossil fuels (RePowerEu), which includes measures focused on energy savings, the diversification of energy supply and the accelerated deployment of renewable energies.

In the field of energy saving for the coming winter, the EU has published a communication on energy saving that encourages member states to promote it with incentives for energy efficient heating systems, insulation of buildings and appliances and products .

The energy diversification of supplies has the European Platform for energy supply, which will allow the joint acquisition of gas, LNG and hydrogen by pooling demand, optimizing the use of infrastructures and coordinating the approach to Providers.

The European Commission also aims to accelerate the development of renewable energy to boost the ecological transition and reduce prices in the long term.

The European target for 2030 in terms of renewable energies increases from 40% to 45%, through the promotion of an EU solar energy strategy, with measures such as the installation of solar panels in new public and commercial buildings and residential buildings new ones, the deployment of heat pumps and measures to integrate geothermal and solar thermal energy in heating systems and the acceleration of renewable gas projects that include biomethane, with an ambitious goal of 35 bcm in 2030, and hydrogen. Likewise, the plan includes the streamlining of permits for large renewable energy projects.

The RePowerEu plan, whose main short-term objective is to put an end to Russia's dependence on fossil fuels, is "a first step to be carried out through two levers: energy efficiency and biomethane (renewable gas)", Narcís de Carreras stands out. Despite the fact that the European strategy is going in the right direction, he acknowledges that "it will not be easy to diversify, and even less so at the moment, with the market stressed."

“The European Union has once again put the energy trilemma at the center, according to which any energy policy must ensure three things: to have security in the supply of energy, at prices that are as competitive as possible for families and industry, and to be sustainable, in addition to coherent, with the decarbonization objectives. And in Europe, and also in Spain, we had long since forgotten about the first two axes of the trilemma”, recalls the CEO of Nedgia, the gas distributor of the Naturgy group. In addition, he highlights the importance of the "energy diplomacy" that the European Union is carrying out.

Regarding the way to approach these challenges, Narcís de Carreras advocates "realism", taking into account that "changing energy sources overnight is not possible" and that "energy policy must be based on data and not in illusions”. He also points out the need to "rethink the rules", and gives as an example that "in the Spanish hydrocarbons law the word 'renewable gases' does not appear". And, lastly, he asks "not to demonize natural gas, because it is an essential raw material, which must be valued", recalling that during the last heat wave more than 60% of energy consumption was covered thanks to the generation of gas and that "gas can be green, through biomethane or hydrogen, which are just as renewable as solar or wind energy".

Digitization will be "key" to "making the right decisions", highlights the consultant for sustainable energy and energy efficiency and president of the Cluster de l'Energia Eficient de Catalunya, Esther Izquierdo. The expert advocates "putting citizens at the center and involving them in the transition so that they go from being passive consumers to energy generators and stores, with models such as shared self-consumption or energy communities".

“The cleanest energy is the one that is not consumed”, Esther Izquierdo adds to the equation, for which she asks “to decouple economic growth and energy consumption”. She also believes in the strategy of "strengthening renewable energies" and building an energy model that "reaches the entire territory", is "democratized", considering both the environmental pillar and the economic and social one.

The director of the National Commission of Markets and Competition (CNMC), specialist in energy transition and director of Smartgrid.cat, Pep Salas, also underlines the importance of regulation to provide "security" to agents when planning investments in energy matters, as well as the "acceleration of administrative processes for new projects". “Non-technical barriers must be removed from administrative processes so that what used to take two years can be resolved in six months,” he insists.

"The future is going to be a mix of energies, there is a long list of alternatives," highlights the futurist expert in technology and energy, Matthew Griffin, who recalls that the energy sector is one of the most "innovative" and technologically advanced.