A solitary goal by Rodrygo –beautifully made– in an isolated flash saved Real Madrid from the embarrassment of a premature elimination at the first substitution in the round of 32 of the Copa del Rey against a humble and combative Cacereño who put him against the strings for 70 minutes. 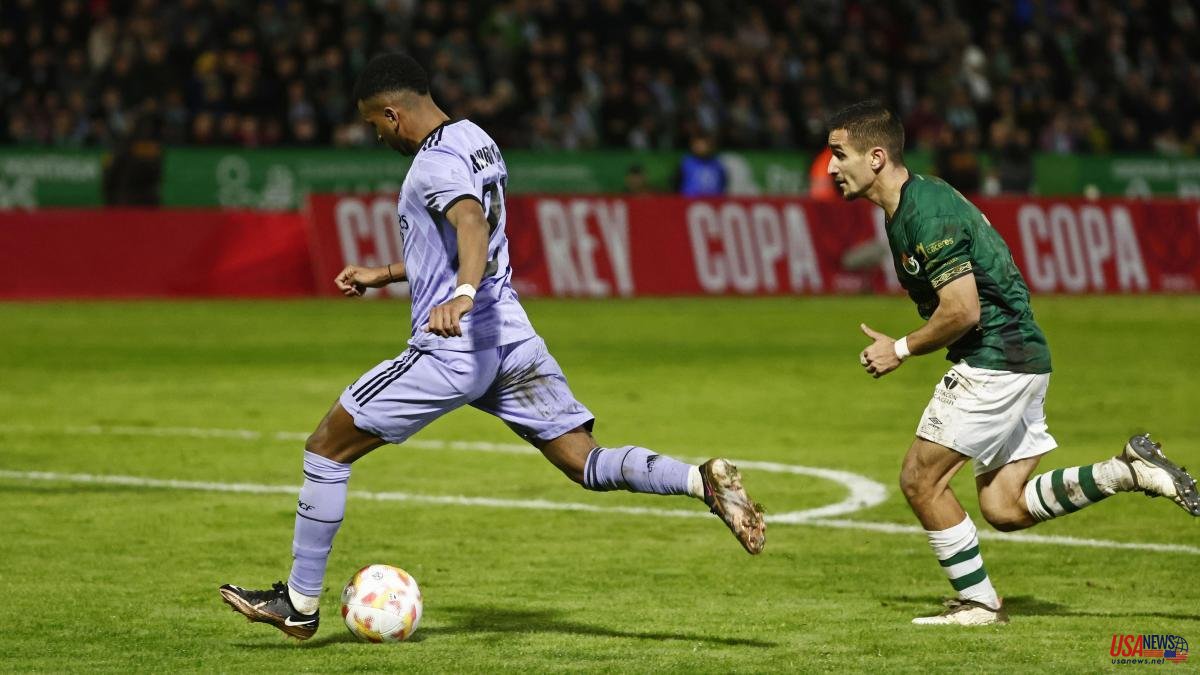 A solitary goal by Rodrygo –beautifully made– in an isolated flash saved Real Madrid from the embarrassment of a premature elimination at the first substitution in the round of 32 of the Copa del Rey against a humble and combative Cacereño who put him against the strings for 70 minutes.

He opted for players without too many minutes, such as Odriozola, who was making his debut this season, on the left side, Lucas Vázquez on the right side and Nacho as a central defender, as well as Ceballos in the left midfielder or Hazard as a left winger after two and a half months without play white.

The Real Madrid team, which has not won the Cup since 2014, found itself, as is customary in these unequal duels, a hyper-motivated, trotting and pressing lower-class rival, who added to the poor condition of the pitch to make it difficult for the whites to play.

Thus, a strange bounce due to a detached piece of grass put the local goalkeeper in trouble in Madrid's first shot on goal, through Ceballos (m. 16). Iván resolved well and avoided danger.

It was a clearer approximation of Ancelotti's team in the first half, in which it was difficult for him to create football, both because of the increasingly raised grass, and because of the increasingly uncomfortable pressure from Cacereño. A team from Extremadura that was growing at times, encouraged by a festive crowd, as in David Grande's shot that forced Lunin to stretch (m. 32) to avoid 1-0.

Cacereño was so encouraged that Madrid went through oppressive minutes before the break, with shots from Telles over the crossbar, another from Manchón and an approach from Carmelo. The locals, much more plugged in, went to all, pressed and showed more ambition against a blurred and uncomfortable League champion, who needed the break to get some air and refresh his ideas.

Back from the locker room, Ancelotti, increasingly restless in the band, turned to Rüdiger, Valverde and Vallejo, replacing Militao, Tchouaméni and Odriozola (injured). But his Real Madrid did not improve or impose any fear on a Cacereño who increased his faith with the shouts of "Yes we can" or the waves of the stands.

The duel entered an uncontrolled phase of runners, without midfield. With Madrid more stretched, imposing his speed and his love for the counter, Marco Asensio enjoyed the best chance (m. 60) in a swing that Iván rejected with his fists.

Despite the approach of the Spaniard, Ancelotti did not like the game at all, who risked it with the entry of the youngster from the subsidiary Álvaro Rodríguez, rookie, for a non-existent Hazard.

The change had its effect, at least in the wake-up call it brought to the rest of the team, because Rodrygo, also very inactive, invented a superb goal from the left wing out of nowhere. He faced Clausí and Aguado, left them nailed with a twist, and placed a tight shot to the right post.

Madrid unraveled a game that was getting more and more uphill with an isolated flash. Maximum efficiency to avoid the embarrassment of prompt elimination.

Referee: Cuadra Fernandez (Balearic). Yellow cards to Tchouaméni, Camavinga and the bench, for Real Madrid, and to Samu Manchon, Ivan Fernandez, Bermu, Pedro and Telles of the Cacereño.