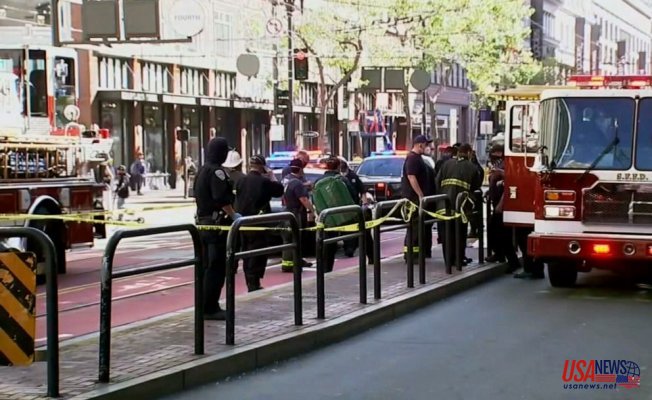 Prosecutors are still investigating if hate crime charges must be added.

The district attorney's office said it is still working with authorities to determine if any additional charges should be brought forth, such as any evidence to support hate crime allegations.

Both victims were hospitalized. The 84-year-old's injuries were initially considered life threatening; she's since been upgraded to non-life-threatening condition, police said. The 63-year-old's accidents are non-life-threatening, authorities said. 1 victim was stabbed in the lungs, along with a knife needed to be eliminated from the second in the hospital, according to the district attorney's office.

The district attorney is not releasing the victims' names.

Thompson was taken into custody about 2 hours after the incident and booked two charges of attempted murder and elder abuse, authorities said. It is uncertain if he's an lawyer.

In 2017, a judge found Thompson incompetent to stand trial during court proceeding for many circumstances, according to the district attorney's office. He was moved to Napa State Hospital and then, afterwards returning to custody, began participating in a state mental health diversion program in October 2018, the office said. A judge granted a motion for him to leave the app after almost two decades, during which time he was not charged with any new crimes, though he was arrested for missing court and also for possessing a drug pipe, the office said.

"What happened is a devastating catastrophe, and we will use the entire force of their office's tools to prosecute this case. We also need to work hard to stop the next crime from happening, and that entails treatment and prevention," Boudin's office said in a statement. "We need far more intensive tools which keep individuals that are emotionally ill treated and supported so they do not reoffend even if there's no pending criminal case."

The coronavirus pandemic and its suspected roots in the Chinese city of Wuhan are mentioned as leading to the wave of anti-Asian discrimination.

There were over 6,600 hate incidents against Asians and Pacific Islanders reported to Stop AAPI Hate, a nonprofit company that tracks such incidents, between mid-March 2020 when the pandemic started and March 31, 2021. About 40 percent of the events were reported in California.