Madrid submits to Juventus and already thinks about the Super Cup

Real Madrid had a feast this Saturday in Pasadena (California, USA) and won 2-0 against Juventus, with goals from Frenchman Karim Benzema and Marco Asensio, in the last friendly match of their pre-season on American soil that served as a confidence booster ahead of the UEFA Super Cup on 10 August against Eintracht Frankfurt. 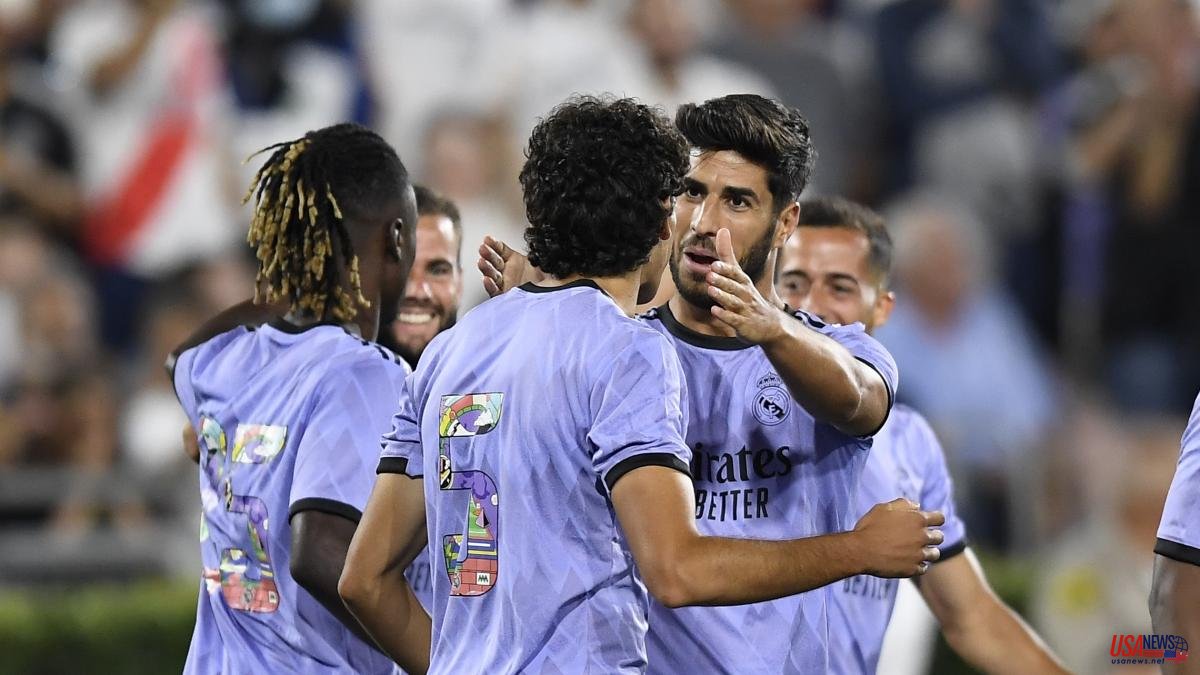 Real Madrid had a feast this Saturday in Pasadena (California, USA) and won 2-0 against Juventus, with goals from Frenchman Karim Benzema and Marco Asensio, in the last friendly match of their pre-season on American soil that served as a confidence booster ahead of the UEFA Super Cup on 10 August against Eintracht Frankfurt.

After the 0-1 defeat against Barcelona in the Las Vegas Classic and the 2-2 draw against América, Madrid closed their American tour with a solid performance and an authoritative victory, boosted in the first half by a penalty scored by Benzema and signed in the second with a masterful choral play culminated by Asensio.

Madrid delighted the 93,702 spectators of the iconic Rose Bowl, a record for the Pasadena stadium, which was attended by thousands of Madrid fans. He did it with a brilliant team performance, with an electric Vinicius Junior on the flanks and with a defense that hardly gave Juventus any chances.

Ancelotti made it clear that this friendly would serve for the protagonists of the Champions League final in Paris to warm up for the Super Cup and in fact the starting eleven in Pasadena was the same as the 1-0 against Liverpool that won the fourteenth Cup of Madridista Europe.

David Alaba and Éder Militao took Serbian Dusan Vlahovic out of the game, Dani Carvajal, recovered after a week off, once again ran down the flank with rhythm and a midfield trio made up of Toni Kroos, Casemiro and Luka Modric directed high pressure together to the offensive trident, Vinicius, Benzema and Fede Valverde.

Madrid showed a good state of athletic form, which pushed Juventus to the limit in the ball-out phase, repeatedly recovering the ball in the offensive zone and creating constant danger in Mattia Perin's goal.

The madridista aggressiveness in all areas of the field caused several mistakes by Juventus and the punishment came in minute 19, when Vlahovic missed a back pass and favored Vinicius's counterattack, who was shot down in the area by Danilo Luiz Da Silva when he was going to free the shot.

The referee did not hesitate to point out the penalty and Benzema crossed his shot with his right foot to celebrate his second goal in this preseason, after the one he signed against América.

The spark of Vinicius, who delighted the fans with plays of great class, the class and calm of Benzema, Modric and Kroos in handling the ball allowed Madrid to enjoy themselves in Pasadena against Juventus in which the Argentine Ángel Di María he was left alone and in which the only dangers came from set pieces.

Of course, in one of them, a direct free kick from 20 meters, the Turinese were able to take advantage, if a good shot by Leonardo Bonucci did not repel the crossbar. Madrid, who played with a special shirt drawn in collaboration with Juventus and Adidas to send a message in favor of inclusivity, did not stop stepping on the accelerator and touched the second goal with a curved left-footed shot from outside the area by Benzema that Mattia Perin sent for a corner.

Ancelotti shuffled the cards, but did not change the result. Madrid continued to delight with their choral game and the prize came in minute 69, when Asensio made it 2-0 at pleasure after completing a magnificent play. Asensio closed a wall with a heel with Hazard, who released Vallejo on the left so that he could put in the low center that Asensio himself finished off.

It was the target that definitively knocked Juventus down and that sentenced the game in favor of a Real Madrid team that is already thinking about Helsinki and Eintracht.