Alberto Núñez Feijóo declares himself against the creation of "tensions that distort the debates". 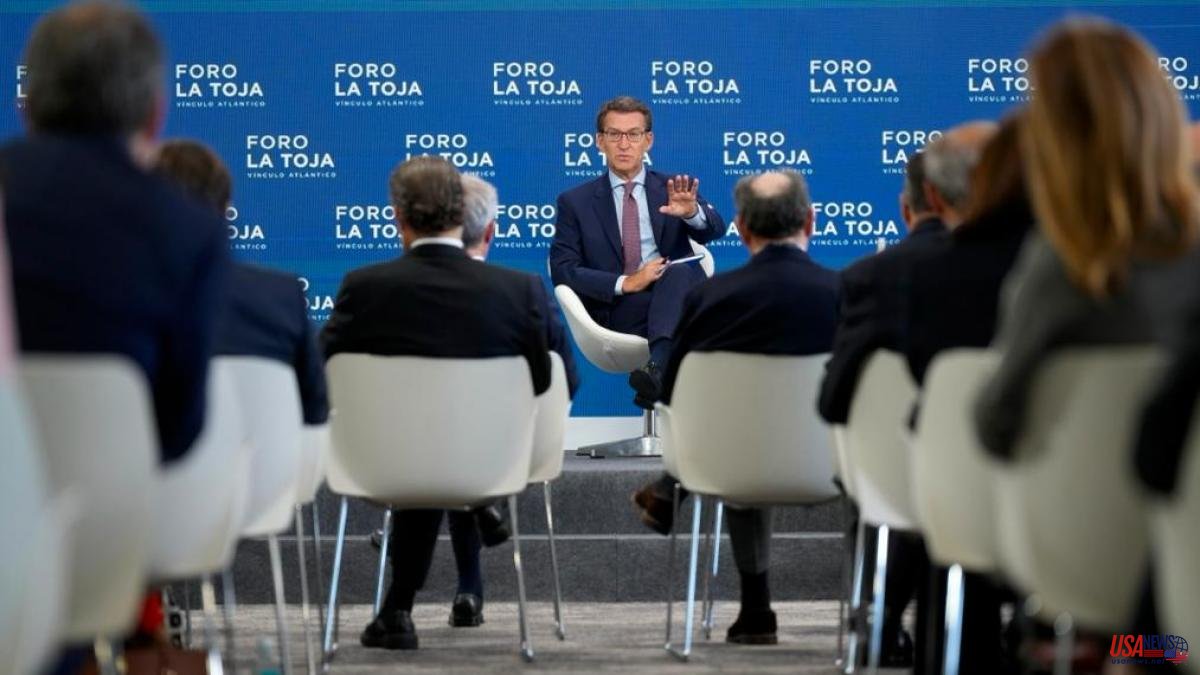 Alberto Núñez Feijóo declares himself against the creation of "tensions that distort the debates". He rejects "sour and bitter discussions, where noise prevails over reasoning" and presents himself as a leader who does what the situation requires "a more predictable and more solid policy", in the face of the "dogmatism" and "populism" of Peter Sanchez.

A President of the Government who seeks more confrontation than dialogue, considers the president of the PP, because if not, it is not understood that he has not responded to any of the proposals that he has sent: anti-crisis plan, energy plan; proposal on security and defense; to change the term disability in the Constitution; to renew the General Council of the Judiciary and increase the independence of justice; or to reduce VAT on basic products in the shopping cart.

The situation that Feijóo described is that of a country in which "the leader of the opposition is not informed of Home Affairs, Defense or Foreign affairs", in a situation like the war in Ukraine, and with situations such as the agreements with Morocco, which he is unaware of, or what happened with Algeria. "A government that does not inform the opposition on matters of state makes me understand that being able to speak and agree, in Spain, is a thing of the past."

A clear example, for Feijóo, which sums up all this, is the plan presented yesterday by the Government, which he described as "fiscal populism", because populism, he said in a conference given at the La Toja Forum, "avoids argumentation and underestimates people's reasoning" with one goal: "to maintain a permanent state of discontent".

It is the difference, Feijóo considers, between a democrat and a populist, that the democrat seeks solutions, and populism "permanent agitation", and while one seeks permanent allies, the other "is a manufacturer of antagonisms". What is even more important at a time of uncertainty, where it is a question, for example in economic matters, of "searching for solutions, not searching for enemies".

For this reason, the Government's fiscal plan does not seem good to him, which is intended "as a punishment for taxpayers", since it is raised "on a dogmatic level", of "taxing someone", which is why he considers that what is presented is "fiscal populism". In his opinion, "lowering taxes, in a given situation, such as the current one, is not right-wing or left-wing, it's common sense." It is about, he said, "respecting the taxpayer, without affecting the state", and now that happens because of the excess collection that the state obtains due to inflation.

In that sense, he explained why he, being president of the Xunta, did not remove the Wealth Tax and justified it in that, in the situation. "I did not eliminate it because the problem we had was collection when I became president of the Xunta, due to the financial crisis, and when I could hardly even pay the payroll for public services, I could not send a message that I stopped collecting 100 million euros, but now there is no such problem, because there is an excess of collection".

Now, on the contrary, according to Feijóo, it is about "generating trust, investment and an environment in which assets stay in Spain and come to Spain", and do not leave or Portugal, which is what is happening, he said , because Costas, a social democrat, has removed the Patrimony tax and does not make a fiscal policy against anyone, and less "stigmatizes companies", because one thing is "asking for a solidarity rate", he said, with which you can be okay, he said, "and another go after the rich."

Alberto Núñez Feijóo is convinced that "if it had been Catalonia that had abolished the Wealth Tax, the Government would not have acted in the way it acted yesterday, among other things because they would be gambling with the Government of Spain", and even less so when the autonomous communities are "exercising their statutory power and are complying with the Constitution", although he considers that "complying with the Constitution is not very profitable and stressing it is".

Feijóo was in favor of reaching an income pact: "It would be good", but it would have to start because "the Government does not call for mobilization and strike, but for consensus and dialogue", also a product of that demagogic and populist policy. He, on the contrary, presents himself with "a more predictable and more solid policy, in taxation in everything else".