Neither a cold, nor the occasional resort to the scarf, have taken away iron from Recep Tayyip Erdogan's review of international news in New York. 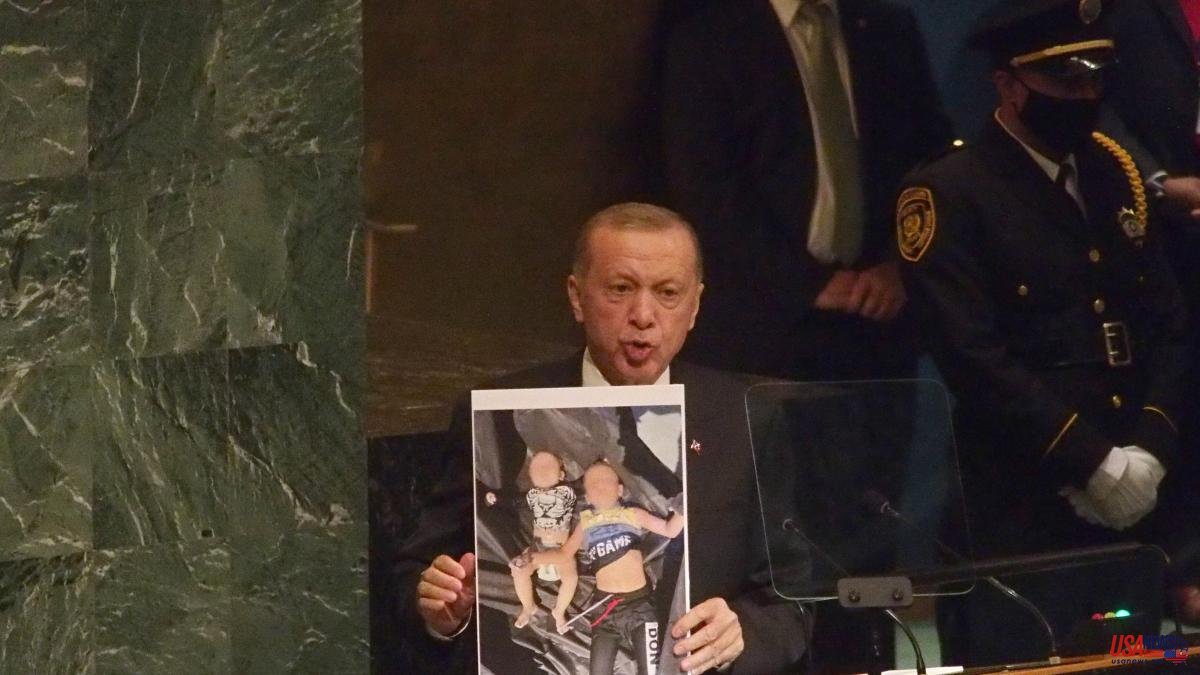 Neither a cold, nor the occasional resort to the scarf, have taken away iron from Recep Tayyip Erdogan's review of international news in New York. The Turkish president has taken advantage of the focus of the General Assembly of the United Nations to nail a puja to Greece. For this he has shown the photos of two children "nine months and four years old", who would have drowned last week in the Aegean Sea, "after their boat was repelled by the Greek security forces". Athens, according to Erdogan, "is turning the Aegean into a graveyard, with its hot returns."

On the other hand, Erdogan has defended "the security of energy supplies", which is why "Turkey, from the beginning, has not considered energy as a field of confrontation but of collaboration". The same goes, according to him, "for food security." So "in the 21st century, it is inexplicable that a fifth of humanity is at risk of starvation." In this sense, he has asserted the role of Turkey, "together with the UN Secretary General", to make the Ukrainian grain transit agreement a reality, "already in its second month".

Elaborating on the war, Erdogan recalled that "for seven months we have been saying that there will be no winners". Hence his commitment "to the role of diplomacy, first in Antalya and then in Istanbul", in order to achieve "a just peace" that guarantees, yes, "the security and territorial integrity of Ukraine".

Like every year, the Turkish president has repeated that "the world is more than five", in reference to the permanent members of the UN Security Council, which he would like "reformed and more transparent".

Recep Tayyip Erdogan has also called for "a lasting solution for Syria", warning that "the PKK - Kurdistan Workers' Party - will never be tolerated and those who try to legitimize it must stop doing so". The Islamo-Democratic leader has also alluded to the plans for "repatriation in safety and dignity of the Syrian brothers and sisters." Because the more than three million Syrian immigrants - who do not enjoy refugee status in Turkey - have become the sword of Damocles that hangs over the Turkish elections in nine months.

Once again, Erdogan has advocated "a two-state solution for Israel and Palestine", which according to him involves "stopping illegal settlements" and the creation "of an independent and sovereign Palestinian state with its capital in East Jerusalem".

Likewise, he estimated that "the issue of Iran's nuclear power plants can be negotiated diplomatically." Regarding the conflict between Azerbaijan and Armenia - which flared up again last week with Azerbaijani attacks on Armenian territory - Erdogan has proposed "a solution that contemplates all aspects of the problem" and has defended that improvements in transport routes " will bring advantages to all". However, the qualification of "brothers" is reserved in this case for the Azerbaijanis.

Also glancing, Erdogan has listed the absence of "a just and lasting peace in Kashmir" and the dramatic deportation of the Rohingya, the Bengalis settled for decades in the Burmese state of Arracán. Although he has not forgotten the Uyghurs, he has also defended the "one China" principle, not citing the Republic of China, better known as Taiwan. In the case of the island of Cyprus, on the other hand, he demanded recognition that "there are two peoples and two countries", a position in which Turkey is once again alone.

The one who is not alone is Erdogan, who this Tuesday met with the Spanish president, Pedro Sánchez, in a meeting that was not on the agenda. Ukraine would have been at the center of their conversation. Sánchez would also have had the opportunity to meet with leaders from Iraq, Pakistan, Bolivia and Niger, among other countries.

Finally, it should be said that this same Tuesday morning, Erdogan would have spoken by telephone with his Ukrainian counterpart, Volodomir Zelensky. Likewise, in an interview on US public television, Erdogan has referred to Vladimir Putin's alleged appetite for "ending soon" with the war in Ukraine.

Hours later, the pro-Russian regions of Ukraine occupied by the Russian army announced the holding of referendums for annexation to the Russian Federation, for this week. While Moscow toughened prison sentences for deserters, a sign that the "special military operation" could become, in a very short time, a declared war to defend "Russian territory" with all the means at its disposal.

From the beginning, Turkey has sought an equidistant position between its two riverside neighbors, "to be part of the solution and not the problem." Although his government has not imposed sanctions on Russia, two private Turkish banks, Is and Deniz, on Monday stopped accepting Russian credit cards, from the Mir network, for fear of US sanctions.

Istanbul is almost the only European metropolis where Russian tourists can land on a direct flight, without even a visa, and immediately withdraw money from an ATM and enjoy their vacations, as if the war on the other shore were not with they.