Donbass, the battle that can change the world

There are battles that can win wars and change eras. 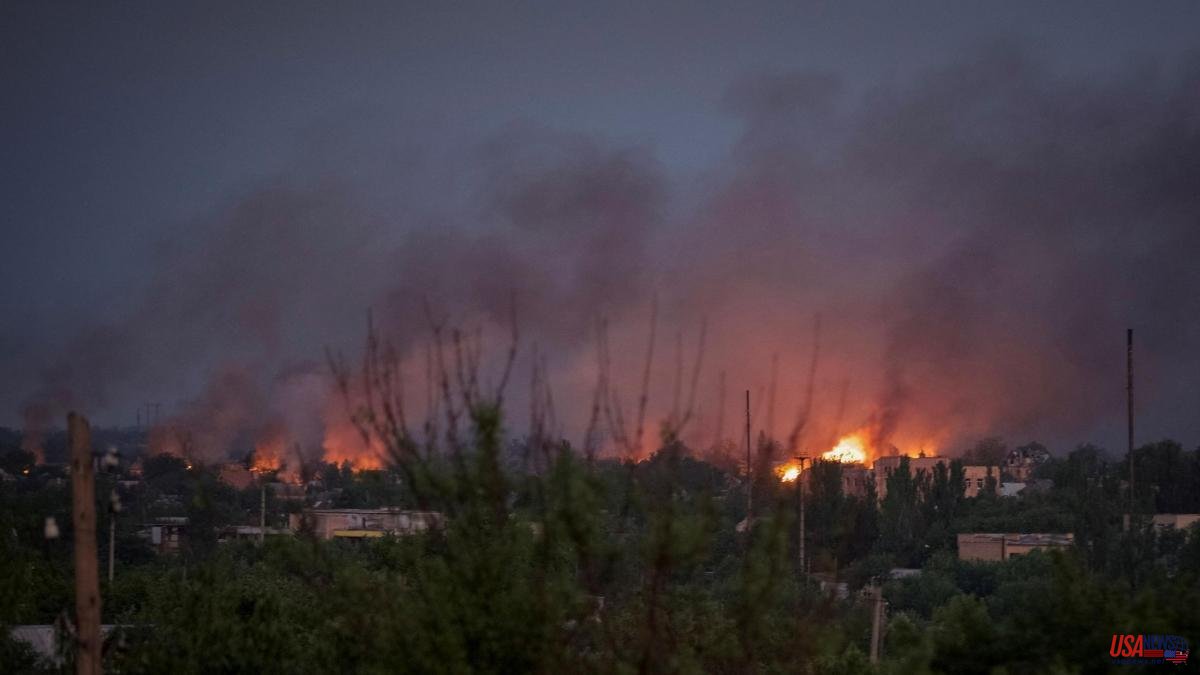 There are battles that can win wars and change eras. The Donbass is one of them. If the Ukrainians manage to repel the Russian offensive, the world will be one way, but if they fail, it will be another way. So easy and so complicated. It is the great game of superpowers in a 21st century version.

The war in Ukraine is often presented as a fight between liberal democracies and totalitarianism, but both China and the United States can emerge victorious, that is, with a beneficial relationship for both and the entire world.

The new world order can be one of confrontation or coexistence, with exclusive geographic areas of influence or international organizations in which disputes can be settled, satisfying the interests of all.

The Western world, as we have known it since the end of World War II, based on the free flow of ideas, people, goods and capital, stakes much of its future on Ukraine. The United States has led it until now and at the end of the cold war it became the only power. There was then talk of a unipolar world.

However, 30 years have passed since the collapse of the Soviet Union, war is ravaging Europe again and autocracies are on the rise. In 2012, there were 42 liberal democracies in the world, according to an estimate by the organization V-Dem. It was a record. Today there are only 34, which barely represent 13% of the world's population, and all of them are suffering from a growing "toxic polarization".

Now there is talk of a multipolar world, with several powers and many nation states that put national sovereignty before any current of international integration. “The jungle is growing again”, argues the American analyst Robert Kagan in his latest book. The law of the strongest returns, the right of conquest.

These populist nationalisms, however, erode democracies and, perhaps, none more than the United States. The United States has been losing the trust of the world for 20 years. The international solidarity that he received as a result of the 9/11 attacks - Putin's Russia was one of the first countries to reach out to him - he squandered with the war "against terror".

The disastrous invasions of Iraq and Afghanistan, the financial crisis of 2008 -which caused Wall Street and spread across five continents-, as well as racism, internal violence and the difficult transition between Trump and Biden put the US between less exemplary democracies.

Before the Russian invasion of Ukraine, the United States was in no position to sustain the world order, let alone build a new one. If in the sixties it represented 40% of world GDP, today it does not reach 25%.

But then Putin made a huge strategic mistake and the world has been able to recall several forgotten lessons.

One of them is the importance of alliances and none is more important than NATO. Neither China nor Russia have military allies like the US. Their response has been unanimous. They have closed ranks to defend Ukraine. The US has consolidated its leadership among them.

The other big lesson is that America's prosperity is tied to the world order. Trump's isolationism is not the solution. As Biden says, he cannot compromise with a dictator because he will always want more. The hegemony of the United States is linked to its being the world's policeman.

This liberal order that has allowed an unprecedented development of humanity was dying before February 24 when Russia invaded Ukraine. Biden himself acknowledged at his inauguration that democracy was weakened. Putin left her for dead two years ago. China tried to demonstrate during the pandemic the benefits of a centralized and authoritarian state.

President Xi's commitment to the covid-zero strategy, however, is being very risky. Despite all the problems at the beginning of the pandemic, the United States has been able to reopen its economy before China, and the dollar, despite the efforts of China and other countries to create digital currencies and de-dollarize commercial transactions, remains the currency that is used in 90% of them.

The Chinese economy, even so, represents more than 20% of world GDP and by 2030 it will be larger than the United States.

At the beginning of the year it seemed that we were headed for a new world disorder. Russia, China, and the United States were predatory states that would stop at nothing to defend their position in the world.

Today they are still just as aggressive, but Ukraine has changed the relationship of forces.

Russia is no longer in the fight. Even if it wins in Ukraine, it will be a state subject to China and isolated from the West, incapable of influencing the future of the world.

It is possible that if Ukraine is not resolved well, a new iron curtain will fall, but this time it will not divide Europe, as it did during the second half of the 20th century, but rather Eurasia. That is, it will come between China and Europe. If this happens, it will be a catastrophe for China, which needs more than ever access to the single European market, the largest in the world.

The old "Heartland" theory doesn't seem to work anymore. More than a hundred years ago, the British geographer Halford John Mackinder, the father of geostrategy, developed the idea that in order to dominate the core of the world (Heartland), one had to first dominate Eastern Europe. From here it was also possible to dominate the insular world (America, South Africa and Southeast Asia). Whoever was able to control these regions could dominate the entire planet.

Russia is trying to dominate Eastern Europe and its alliance with China is a geostrategic danger for the United States. But it is not a balanced alliance and it may not be a viable one either.

The Chinese initiative of the Strip and the Belt -which consists of reestablishing the old silk route- had a geostrategic sense that is now diluted. The connection with Europe through Central Asia is very problematic as long as there is war in Ukraine.

The alternative of sea routes remains, but the United States continues to control the Straits of Malacca and Hormuz, bottlenecks that can suffocate the Chinese economy. Putin's territorial ambition in Ukraine accentuates this vulnerability.

The global economy no longer responds to mere economic interests. Quite the contrary. Now geopolitical interests rule, and this is very bad for business. Now there are problem markets. Russia is the main one, but so is China. There are disputes over gas pipelines, semiconductors and 5G networks.

Deglobalization accentuates the clash and disconnection between blocs. Large producers sacrifice production efficiency for resilience. It is not so advantageous to produce cheaply in China if the supply chains do not work, especially in critical moments, as it happened during the pandemic and is happening now with the war in Ukraine.

Each block seeks greater autonomy. The covid has already rescued the old defense of protectionism. Europe and the United States spoke of China as a strategic rival.

The nationalists exploited the inequalities of globalization to win elections. "America First," Trump's motto, was replicated in other democracies.

The big exporting economies began to suffer the consequences. Germany and China noted it harshly. It was the prelude to difficulties that have been aggravated by the war in Ukraine.

Energy is expensive and will continue to be as long as there is no peace and Russia cannot supply gas and oil to Europe. Neither the United States nor European countries can do without cheap Russian energy. They lack a decade, at least, for the energy transition to allow the disconnection.

Even if Saudi Arabia increases crude oil production, prices will not go down. It would be necessary for Iran to be able to export and for Venezuela to do so, which has the largest reserves in the world. But the nuclear program condemns Iran and Chavismo has destroyed the Venezuelan oil industry.

Ukraine's defense is expensive and will hamper the growth of liberal democracies. Its citizens lose purchasing power and populism wins votes more easily.

Inflation is skyrocketing in Europe and the United States, while grain supplies to many Asian and African countries are compromised. Without food security, the risk of conflict also skyrockets.

Neither the United States, Europe nor China are interested in this situation. Ukraine is a test for liberal democracies, but it is also a problem for Beijing, which needs stability to win back Western markets it lost during the pandemic.

The 21st century will be decided in the Indo-Pacific, not in the Ukraine. Most of humanity is concentrated there. China and the United States can opt for confrontation, but also for collaboration. They are systemic rivals, but retain a common sense of how best to serve their particular interests. It would not be the first time. They already collaborated during the cold war to isolate Russia. Both prospered as never before.

Before this is possible, however, Ukraine must be resolved, and this is where the battle for Donbass comes into play. If Russia maintains the offensive in the coming weeks, it will be very difficult to defeat it. The war will last beyond the summer and the solution will be even more complicated for everyone.

The situation is now very difficult for Ukraine. Russia has a superiority of 7 to 1 in artillery and 5 to 1 in number of men deployed in the Donbass. President Zelensky has acknowledged that a hundred soldiers die every day. The daily wounded exceed half a thousand.

However, if the heavy weapons being sent by the allies allow Ukraine to stop the Russian advance during the summer, everything will change. It will be easier to negotiate a ceasefire on all fronts.

As soon as the violence ceases, diplomacy will be able to work with more guarantees. It will be the time for Turkey, Israel, China, France and Germany.

No influence will then carry more weight in the Kremlin than that of Beijing. The "limitless" alliance that Putin and Xi sealed at the beginning of the year has not meant that China arms Russia or supports it in the United Nations. Xi has all the power on her side when dealing with Putin.

Presidents Xi and Biden must also agree that peace in Ukraine does not imply a decisive advantage for either of their two countries. They both know that they can benefit greatly if they play their cards right. The one in Taiwan, for example, would be nice not to play it now.

If they win, the world, at least for a few years, will be more habitable. If they lose, the mess will spread.