A country in the bunker

The T-72B3 tank was one of thousands of battleships that threatened Kyiv for weeks. 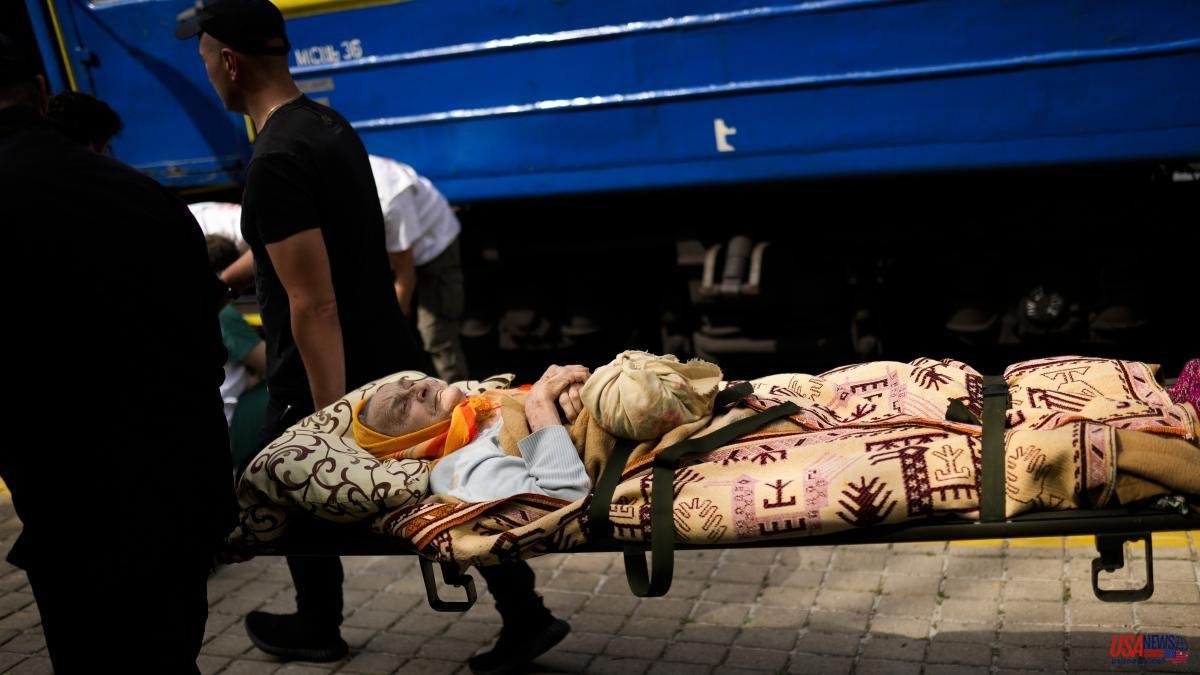 The T-72B3 tank was one of thousands of battleships that threatened Kyiv for weeks. This one in particular belonged to the 31st Air Brigade of the Russian Federation Forces that had been fighting the Ukrainian army since the first days of the invasion for control of the strategic Hostomel airport, northwest of the capital.

Now it is charred and turned into a symbol of victory for control of Kyiv, which after five weeks of siege is slowly returning to the normality that war allows. Traffic has reappeared in certain sectors, many restaurants and cafes return to their terraces and the streets are busy again.

This is especially evident around the Plaza de San Miguel, surrounded by the Intercontinental Hotel and the Ministry of Foreign Affairs, where some of those corpses from armored vehicles are on display.

“I am going to pray for dozens of friends who are on the front lines in Donbass,” says former parliamentarian Hanna Hopko, crossing the square on her way to the beautiful church of St. Michael, adorned with its golden domes. Since the start of the war, Hopko has been touring the world trying to convince international bureaucrats of the importance of supporting Ukraine.

This morning he walks quickly and with an umbrella in his hand; It has dawned raining. Before entering the church, she remembers that in 2015 she made this same tour with then Vice President Joe Biden; he told him the reasons why Ukraine should be supported in its fight against Russia. Today he repeats the same thing: “This is a war for the whole world. If we win, it will be a victory against dictatorships and authoritarian regimes”, says this 40-year-old woman who, like many in recent weeks, has returned to Kyiv to live.

He is aware that this feeling of security is fictitious. The capital is no longer close to the front lines, but it is within missile range. Like the rest of Ukraine. To reduce anxiety, she combines her time between caring for a small garden that she has 40 kilometers from the city and her work meetings. She is convinced that if every Ukrainian who has access to the countryside does the same, they will reduce the chances of Russia using starvation as a tool of war again, as she has done in past wars. Thousands of hectares of cultivated land have been trapped by the war, such as Donbass, where caravans of tractors have been seen leaving the area in the face of the Russian advance in recent weeks.

As the Russian forces advance, more land is left adrift. They are also in danger of losing grain reserves stored in warehouses that have not yet been removed from the area. The war seems to have overwhelmed the logistical channels of the state.

The highway that leads from the center of the country to the city of Kramatorsk – today practically deserted – is traveled by hundreds of military trucks that transport food, soldiers and all kinds of weapons supplied by the West, such as tanks, artillery, speedboats...

Nikolaiv lives quite far from Kyiv, but he does the same as Hanna: he cultivates his garden to survive. In his case, he has no other choice because he lives in a small dusha – farm – near Bakhmut, a city in the Donetsk province that has become strategic in the fight for Donbass. On Tuesday, May 24, when we found him, he was lining up in front of a gas station to fill up his car. A scene that is repeated throughout the country due to fuel shortages.

Unlike many who stock up in case they had to flee the city, Nikolaiv had no intention of doing so. "I have no money, so I will stay." He does so even though he acknowledges that the situation is getting creepier, especially at night. The Russian forces are attacking harder and harder, especially with their artillery. This is recognized by some of the doctors waiting at the beginning of the so-called highway of life that connects Bajmut with the populations of Lisichansk and Severodonetsk, currently besieged. Until days ago, these same missions provided support from more advanced towns such as Berestove, but in recent days the incessant rain of Russian artillery, added to attacks by planes and helicopters, has pushed them back.

One of the missions supported by Dr. Shaman, a veteran of the wars in Afghanistan and Chechnya, was attacked, and its members were recovering from their injuries. But many others have not been so lucky. One of the doctors who provides support in a commercial passenger van converted into an ambulance says that in recent days he piles up the wounded on the ground, which he covers with cardboard to collect the blood. They do not attend to wounded by bullets, as in other wars, but by artillery; the consequence is very serious injuries such as dismembered legs or arms.

Oxana answers the phone from somewhere in the west of the country. A few days ago she had to leave Yakovlivka, a peasant town that is divided by the highway of life. Her family ran a small store that for weeks was the resting place for soldiers – and journalists – who stopped to rest and have a coffee. The village, they tell him, is practically razed to the ground – as is the case where Russian forces are aiming – and that the few who have remained live without being able to leave the basement. A ritual that is repeated in all the regions that are hit by the Russian artillery. This includes the city of Mikolaiv, strategic in the fight for Odessa, and the ports on the Black Sea.

There, thousands of older people spend most of their time in shelters and when they leave, they face problems such as lack of water. Many live thanks to the humanitarian aid distributed by local volunteers; thanks to them millions of people survive.

But the fear does not cease, as it happens in neighborhoods and towns near Kharkiv where, although the Ukrainian troops have pushed back the invaders, the Russian artillery attacks continue. Two days ago they attacked a solar energy field. And those who remain there live with the uncertainty that the enemy may return. The war is far from over. They all have it clear.