Brazil's Carnival begins with parades, parties but no mayor

Revelers across Brazil began Carnival celebrations on Friday, taking to the streets to dance, drink beer and spirits, and blow off steam at a time of economic angst and fury with politicians over a sprawling corruption scandal.The world's most famous Carnival... 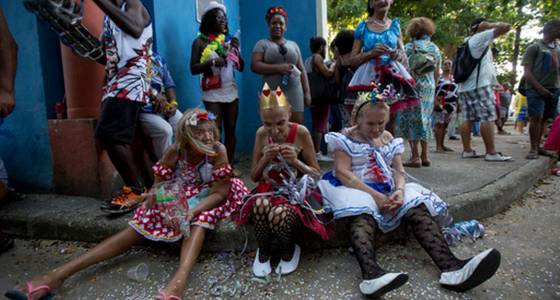 Revelers across Brazil began Carnival celebrations on Friday, taking to the streets to dance, drink beer and spirits, and blow off steam at a time of economic angst and fury with politicians over a sprawling corruption scandal.

The world's most famous Carnival bash in Rio opened in a strange way. After a day in silence, the city's evangelical Mayor Marcelo Crivella delayed the traditionally opulent starting ceremony until 8:30 p.m. only to skip it with the excuse that his wife was sick. Eventually, Rio city hall put out an email saying that Carnival was "officially open."

But several so-called block parties in Rio were underway by the afternoon. Thousands of revelers danced amid 90-degree (32 Celsius) heat with high humidity, standard during the Southern Hemisphere summer.

At the "Carmelitas" block party in Rio's bohemian Santa Teresa neighborhood, revelers dressed up as nuns, with many carrying signs insulting politicians who oppose marijuana legalization.

"The lord says: you will try all the herbs that came from the seeds," read one banner.

But it was the odd opening to the iconic festival, which brings in more than $ 1 billion to Rio each year, that was the talk of the day.

At the sambadrome, where top league samba schools begin competing on Sunday, revelers waited Friday for the traditional handing over of the city's key to "Rei Momo," or the king of carnal delights. This was always done with great fanfare by former Mayor Eduardo Paes.

But the current mayor, Crivella, decided to send the head of Rio's tourism agency to represent him at the opening ceremony. Even stranger was the quick removal of Rei Momo, who did not give interviews as usual and was escorted out of the sambadrome by security guards.

It isn't clear whether Crivella, a retired Pentecostal bishop who took office on Jan. 1, will attend any of the five days of parades at the sambadrome. Rio's city council has already authorized him to travel abroad on the next few days.

Earlier Friday, when it was still unclear whether the mayor would come for the opening ceremony, Maria Cristina held the symbolic key to the city, appearing like somebody who had been stood up.

"I would also like to know what is going on," she said when asked by an Associated Press reporter about what she would do with the key.

Cristina said the mayor's office had told her and the symbolic key-holding group to come, but hadn't said more about the plans.

The mayor "should separate religion from politics at our Carnival," said Marisol Portela, a homemaker who had come to the sambadrome. "He will not be missed. We will throw our party anyway."

Latin America's largest nation is also recovering from a brutal impeachment fight last year that led to the removal of President Dilma Rousseff for illegal mismanagement of the budget. The man who replaced her, Michel Temer, is deeply unpopular.

One of Rio's big block parties is dedicated to the president. It's theme: "Out with Temer!"