The Knicks’ triangle is rising again, and so is Kurt Rambis

The Knicks sidestepped plunging into 13th place in the East on Carmelo Anthony’s last-second shot Saturday. They face a week that starts Monday with one of the best teams in the East, Toronto, and ends Sunday with the best team in the West, Golden State.So... 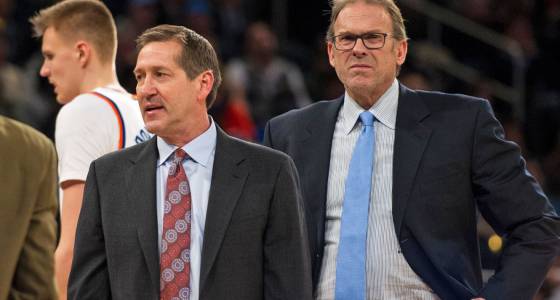 The Knicks sidestepped plunging into 13th place in the East on Carmelo Anthony’s last-second shot Saturday. They face a week that starts Monday with one of the best teams in the East, Toronto, and ends Sunday with the best team in the West, Golden State.

So naturally a big topic of conversation was the triangle offense.

Two weeks ago, owner James Dolan announced his full-fledged support of president Phil Jackson, stating, “Phil has two more years after this to work and develop and I’m going to honor my deal with him.” Jackson, of course, is the planet’s leading triangle proponent, leading a gang of like-minded supporters that roughly numbers the total of Knicks victories.

Coach Jeff Hornacek, who utilized a fast-paced, point-guards-everywhere offense in Phoenix, acknowledged Saturday that practices after the All-Star break contained a lot of triangle implementation. Knicks players, though, have not been counted as the stoutest triangle supporters.

Point guard Derrick Rose, whom the Knicks tried to trade at the deadline, called it “random basketball.”

Carmelo Anthony never has been a fan, but usually is a good soldier. Anthony also stayed put, largely because of a 15 percent trade kicker and the no-trade clause in his contract.

At All-Star Weekend, Kristaps Porzingis, the heir-in-waiting for the title of “Face of the Franchise,” claimed of the triangle, “We don’t really know it as well as we did last year.”

So roll out practices with Kurt Rambis, former Jackson aide with the Lakers and Knicks fixture in the Phil Era, playing a bigger role in the instructions.

“He is involved in every practice. He chimes in on both ends,” Courtney Lee said of Rambis.

After Anthony saved the Knicks from disaster and a second huge collapse loss to the Sixers, nailing a jumper with .3 seconds left for a 110-109 win, he was asked if the triangle were back.

“I don’t think it ever left,” Anthony said.