LOS ANGELES >> The balcony that oversees the practice court gave Magic Johnson a clear view of the players below it. The setting seemed fitting since Johnson’s presence as the president of basketball operations has cast a looming shadow over... 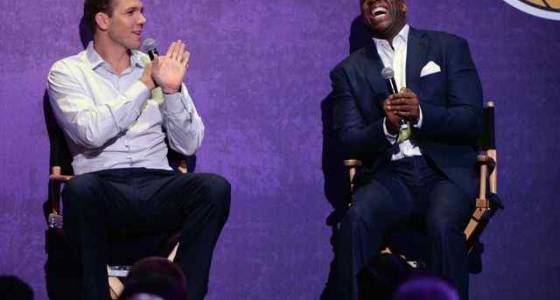 LOS ANGELES >> The balcony that oversees the practice court gave Magic Johnson a clear view of the players below it. The setting seemed fitting since Johnson’s presence as the president of basketball operations has cast a looming shadow over the organization.

“It’s nice to look up there and see the Magic Man staring down,” Lakers coach Luke Walton said, grinning.

Walton then chuckled on if Johnson had shouted instructions from up top.

“No, he’s just observing. It’s not football. We don’t get up and use a blowhorn and yell directions onto the court,” Walton said. “It’s not like he’s the crazy old uncle that’s screaming at people. He’s just observing and making his own assessments of what’s happening. We then get together and talk about it.”

Either way, the Lakers (19-41) enter Tuesday’s game against Charlotte (25-34) at Staples Center with Walton measuring his young team’s progress that goes deeper than results and box scores.

All of which will likely influence the Lakers’ plans for the NBA draft and free agency.

The Lakers waived veteran reserve guard Jose Calderon on Monday after negotiating a buyout. Though Calderon averaged a career-low 3.3 points on 41.6 percent shooting in 12.2 minutes through 24 games and 11 starts, the Lakers valued Calderon for mentoring the team’s younger players.

“This is something we had gone to them and talked about since Jose wasn’t playing a bunch,” said Calderon’s agent, Mark Bartelstein. “There were teams we thought would be a good fit for him that are high-level playoff teams. We went to the Lakers, and I’m very appreciative of Magic doing this. They liked having Jose around and thought he had a good influence in the locker room with the young guys. Magic wanted to keep him around for the season. Jose’s got a lot of basketball left in him and can play at a high level. But with the Lakers being in a rebuilding state, it didn’t make sense from a playing perspective.”

While it is not clear how the Lakers will fill their open roster spot, it appears likely Calderon will join a playoff team once he clears waivers. The Golden State Warriors are among the teams interested in signing Calderon, according to a league source familiar with the situation.

While on the injured list, former Lakers guard Derek Fisher inadvertently prepared himself for his future career.

With the late Lakers announcer Chick Hearn fighting off laryngitis, Fisher filled in next to longtime Lakers analyst Stu Lantz for the Lakers-Spurs telecast on Feb. 21, 2001.

“I definitely had no idea what I was doing,” Fisher recalled. “But I sat in on the game and did some work.”

Nearly 16 years later, Fisher has become more familiar with the craft as an analyst at Spectrum SportsNet and TNT. In the so-called “Players Only” team that featured former basketball players to call NBA games, Fisher was among the broadcasting crew with Brent Barry, Grant Hill and Lisa Leslie for the Indiana-Houston telecast on Monday.

“I’ve tried to be myself, still be engaging and honest but do it in a way that people can respect it,” Fisher said about his broadcasting style. “I’m not in this to criticize people personally or bash people even with their performance. To me, there has to be a human side to analyst’s work as well.”