Injuries not the way the Mets wanted to start spring training

PORT ST. LUCIE — Good fortune — or, to be more precise, good scheduling — put me at the Yankees’ Grapefruit League home opener Friday and the same for the Mets on Saturday.The Yankees put on a de facto commercial for their long-term plan, with their... 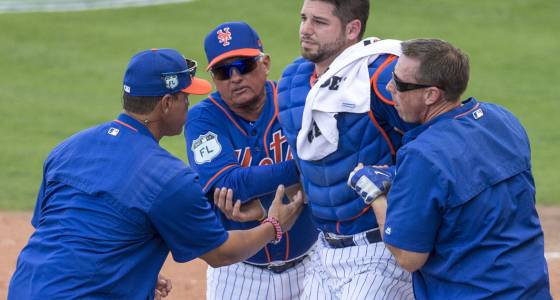 PORT ST. LUCIE — Good fortune — or, to be more precise, good scheduling — put me at the Yankees’ Grapefruit League home opener Friday and the same for the Mets on Saturday.

The Yankees put on a de facto commercial for their long-term plan, with their young pups displaying promise and, in Aaron Judge’s case, massive power.

The Mets? Thankfully for them, in baseball — unlike in that old Head & Shoulders commercial — you do get a second chance to make a first impression.

David Wright’s heartwarming return to game action couldn’t carry the Mets’ day (or this column). Not with Lucas Duda missing in action due to ailing hips and with Kevin Plawecki suffering a big scare, one that apparently could have ended worse, from a home-plate collision. Though the Mets won’t sweat their 8-6 loss to the rival Nationals at First Data Field, they’ll hope this day doesn’t serve as any sort of precursor for a second straight injury-plagued year.

Maybe the Mets’ top four starting pitchers have the right idea in growing mustaches. It mitigates the risk of a shaving cut.

“We’re just very, very fortunate at this time we’ve still got a lot of camp left. A ton of camp left,” manager Terry Collins said. “And we’ll be able to assess it as we go. … I’m glad to do it now rather than in two weeks.”

The “it” referred to Duda’s condition, one that required a pair of cortisone shots on Friday. In the wake of the serious back injury that ruined the first baseman’s 2016 season, it has to be concerning to the Mets, its good timing notwithstanding.

The Mets have built admirable roster depth, and Collins mentioned the likelihood of getting Jay Bruce and Neil Walker reps at first base, and maybe Wright, too, assuming the captain — still throwing every other day in private sessions — can work his way into playing the field. Wilmer Flores, viewed as Duda’s platoon partner, started at first on Saturday.

Yet a peak Duda gives the Mets, as currently constructed, something they can’t replicate: a lefty-swinging “big, hairy beast” — to use the vernacular of Yankees general manager Brian Cashman — who draws a ton of walks and hits a ton of homers. The Mets can’t withstand another protracted absence by Duda. They clearly are better with him.

Plawecki, currently slotted as the starting catcher for Triple-A Las Vegas and still regarded with some promise by Mets officials, went down hard when the Nationals’ Rafael Bautista plowed his left shoulder into him. You immediately wondered whether a tear occurred. The early medical read, however, stated Plawecki suffered a mere contusion to his knee, with X-rays to follow.

Given the questions surrounding starting catcher Travis d’Arnaud, the Mets don’t want to limit any of their catching options, no matter how badly Plawecki faltered the prior two years.

That the most optimism on this day surrounded Wright provided a mixed blessing. Who doesn’t want the Mets’ captain to return from the flurry of conditions (spinal stenosis) and injuries (neck surgery) that have limited him to 75 games combined in 2015 and 2016? The 34-year-old received a healthy standing ovation from the crowd here as he went 0-for-2, making solid contact on a flyout to center field and a line drive to third that Neftali Soto dropped and recovered to throw out Wright.

“It’s really nice to see David out there, and he looked healthy,” said Wright’s old teammate, Daniel Murphy of the Nationals. “Hopefully he feels pretty good tomorrow and he can keep making strides and moving toward Opening Day.”

Nevertheless, given his recent medical history and the hurdles that still must be cleared, you don’t get truly excited about Wright until he finishes a full season intact.

It probably is worth mentioning that, in his 2017 exhibition debut Saturday, the Nats’ Bryce Harper crushed a home run to right-center field and drilled a single to left. Talk about bad omens.

All the Mets need to do, their first exhibition home game in the books, is hope this day turns out to be as meaningless in the long run as the Grapefruit League standings themselves.