ENGLEWOOD, Colo. -- The Denver Broncos' football decision-makers, coaches, scouts, trainers and medical staff will pile into airplanes this week and head to the NFL’s scouting combine in Indianapolis.And history shows they will see most, if not all,... 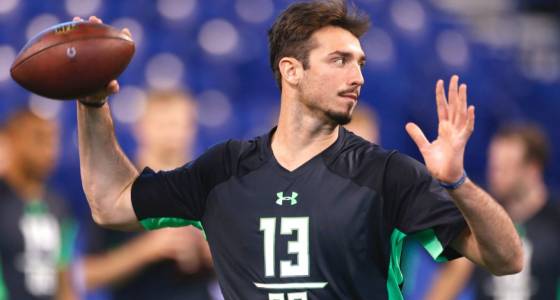 ENGLEWOOD, Colo. -- The Denver Broncos' football decision-makers, coaches, scouts, trainers and medical staff will pile into airplanes this week and head to the NFL’s scouting combine in Indianapolis.

And history shows they will see most, if not all, of their eventual draft class over the weeklong event. Almost every player the Broncos have selected in the six drafts John Elway has overseen as executive vice president of football operations/general manager has been one who has been put through the rigors of running, jumping and sprinting around orange cones at the combine.

The combine is the spot where most of the top-rated prospects are invited to show what they've got to offer. It’s certainly not the only place to see future pros -- cornerback Chris Harris Jr. will always be proof of that.

"I always tell guys it doesn’t matter how you get here just make the most of your chance once you get here," said Harris, who made the Broncos’ roster as an undrafted rookie in 2011. "But if you go to the combine you get seen by everybody in the league, it’s going to help you. A guy like me, you’re working uphill, you know?"

In three drafts -- 2011, 2012 and 2013 -- all the Broncos' selections were combine players. In each of the last three drafts, the Broncos have selected at least one player who had not been invited to the combine.

Furman didn’t make it out of his first training camp while Kilgo was released this past season. Kilgo was on the Patriots’ practice squad at the Super Bowl earlier this month. Siemian, Nelson, Nixon and Parks remain on the Broncos' roster.

Debate the worthiness of the drills if you must in what some scouts call the "T-shirt Olympics" or even "recess," but the ability to sit down with the prospects and see how they handle themselves through the week has mattered to the Broncos.

As Von Miller, who was Elway’s first draft pick, put it: “I think I knew at the combine the Broncos were going to pick me. I thought I hit it off with John Elway and they could see what I was about. I just remember when I left [Indianapolis] I thought there was a real good chance I would end up with the Denver Broncos."