TAMPA — Chris Carter saw the news Lucas Duda would be shut down after receiving cortisone shots on Saturday, but said his mind didn’t go toward missing out on a chance to play more.“I pay attention to some of that, but you can’t sit around, waiting... 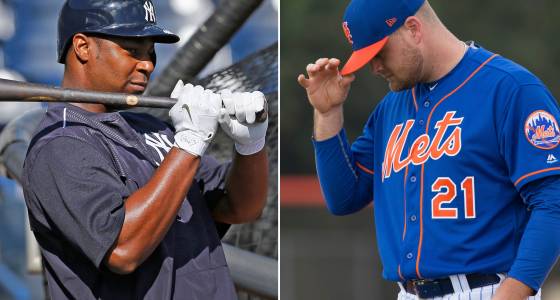 TAMPA — Chris Carter saw the news Lucas Duda would be shut down after receiving cortisone shots on Saturday, but said his mind didn’t go toward missing out on a chance to play more.

“I pay attention to some of that, but you can’t sit around, waiting for someone to get hurt,” Carter said before going 0-for-1 with a walk as the first baseman in the Yankees’ 7-2 win over Toronto on Sunday at Steinbrenner Field. “You could end up sitting out even longer.”

And Carter wasn’t interested in that after an unusual offseason in which he went unsigned until the Yankees picked him up this month — despite the fact Carter led the National League with 41 homers while with the Brewers last season.

Carter said the Mets were never in the conversation when it came to his free agency, but with Duda sidelined, they have already increased Jay Bruce’s work at first. And he hasn’t played there since 2014.

Despite being limited defensively, Carter started 151 games at first for Milwaukee last season and is expected to see time against southpaws in place of the lefty-hitting Greg Bird.

“I’m all good here,” Carter said. “I’ve just got to get out there and play and figure out what I’m gonna do.”

It’s a role Carter is unaccustomed to, since even his sky-high strikeout totals haven’t prevented him from being a regular player each of the last four years.

He was designated for assignment by the Brewers, and the Yankees picked him up for $3.5 million late in the offseason.