Galleries Videos CONTACT ADVERTISE
Famagusta 16°
light rain
BUSINESS EDUCATION ENTERTAINMENT HEALTH POLITICS SCIENCE SPORTS TECHNOLOGY
10:58 Kratom Tea: How Is It?
11:46 Office Furniture Products for you!
12:17 Top Clubs, Their Value, Revenue And Current Standings
11:14 Reasons Why Rewarding Yourself is a Good Practice
10:56 What Egypt Has to Offer for US Travelers
12:48 How to Maximize Compensation in Your Personal Injury Case
12:28 How To Use a CBD Vape Pen for Anxiety
05:28 Second-Hand Vaping Is Harmless
05:15 Guide to Vaping and CBD Flower for Beginners
14:55 COVID-19 Recovered Ronaldo and Zlatan outshining everyone in Serie A
BIST
1347
GOLD
453.145
USD
7.7823
GPB
10.4044
EUR
9.2808
Breaking News
Tips & Trick To Buying Jewelry Items Without Spending Much
Close

MIAMI -- Chris Bosh is heading back to the NBA, this time as an analyst.Turner Sports announced Thursday that Bosh will be part of its "Players Only" team of analysts for five consecutive Mondays, starting Feb. 27. Bosh will work from Turner's studios... 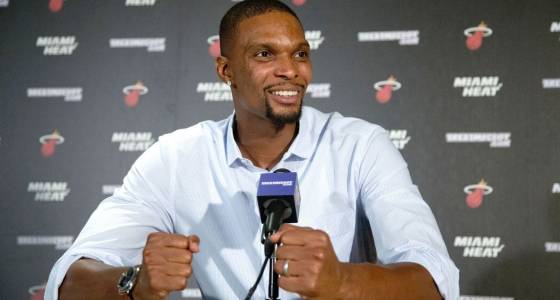 MIAMI -- Chris Bosh is heading back to the NBA, this time as an analyst.

Turner Sports announced Thursday that Bosh will be part of its "Players Only" team of analysts for five consecutive Mondays, starting Feb. 27. Bosh will work from Turner's studios in Atlanta, working alongside Chris Webber, Isiah Thomas and Baron Davis.

Bosh has not played an NBA game since Feb. 9, 2016. He remains under contract with the Miami Heat, though has not played this season while dealing with issues related to blood clots.

Bosh got a head start on his new job Thursday, when the 11-time All-Star appeared on Turner's programming related to the NBA trade deadline.

Bosh is Miami's highest-paid player, set to earn $75.8 million over the next three seasons. His money is guaranteed, though the Heat can get salary-cap relief this month from the bulk of that amount if Bosh doesn't return to the court.