Famagusta 16°
overcast clouds
BUSINESS EDUCATION ENTERTAINMENT HEALTH POLITICS SCIENCE SPORTS TECHNOLOGY
10:22 Four Benefits of Hiring a Dedicated Development Team
04:48 Mark Kelly, President of Safety Marking Inc., Discusses Structuring Effective...
17:58 Trump wants to play golf at the Biden swearing-in in Scotland - but is...
17:54 First doubts Regarding tightened Steps: two National Countries Extract...
10:39 Covid-19 : in France, the end of containment and entry into force of the...
04:34 The schools of Rome will use the Internet with light bulbs: what it is...
10:58 Kratom Tea: How Is It?
11:46 Office Furniture Products for you!
12:17 Top Clubs, Their Value, Revenue And Current Standings
11:14 Reasons Why Rewarding Yourself is a Good Practice
BIST
1538
GOLD
438.043
USD
7.3577
GPB
10.1211
EUR
8.9424
Breaking News
Navigating a Hearing Disorder Diagnosis
Close

Why Is Free Trade Bad? Trump Says NAFTA Resulted In 'Economy Un-Development' For US

In his speech at the Conservative Political Action Conference, or CPAC, in National Harbor, Maryland, Friday morning, President Donald Trump employed his usual superlatives when he lambasted the North American Free Trade Agreement as “one of the worst deals... 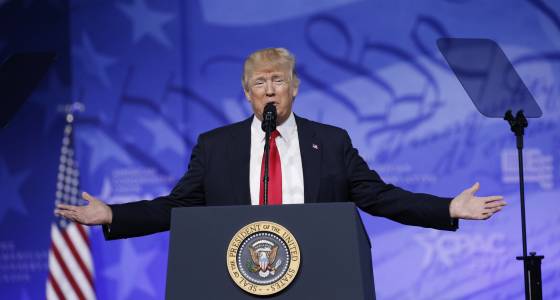 In his speech at the Conservative Political Action Conference, or CPAC, in National Harbor, Maryland, Friday morning, President Donald Trump employed his usual superlatives when he lambasted the North American Free Trade Agreement as “one of the worst deals ever made by any country” leading to “economy un-development.”

In reality, NAFTA, a rallying cry for blue-collar supporters making up Trump’s relatively less-educated base, had only a modest impact on the American economy, as U.S. trade with both Mexico and Canada amounted to 5 percent at the time of the agreement’s adoption, in 1994. NAFTA did, however, increase U.S. gross domestic product “by a very small amount—probably no more than a few billion dollars, or a few hundredths of a percent,” according to a 2004 report by the Congressional Budget Office.

Although NAFTA led to estimated annual losses of between around 40,000 and 200,000 jobs in the U.S. in the 20 years since its passage, much of which occurred in the auto industry, those numbers represent small dents in the 4 million job displacements American workers face each year, and the 17 million that were added in the seven years since it was enacted. Indeed, former independent presidential candidate Ross Perot’s famous prediction that the agreement would result in a “giant sucking sound going south” may have been a bit of an exaggeration.

Because the trade deal brought down barriers for U.S. exporters, it resulted in an estimated net growth of 5 million jobs, according to the Chamber of Commerce.

Trump’s ire may be somewhat misplaced in terms of the supposed drawbacks of open trade. Much of the negative impact on manufacturing industry over the past few decades has stemmed from increased trade with China, which, while it benefitted low-income consumers substantially in the form of lower product prices, exposed parts of the U.S. workforce to competition from Chinese workers, leading to lower wages—exacerbating inequality and contributing to the so-called “college premium”—and higher jobless rates, much research has indicated.

Trump certainly targets Beijing in his cries for isolationism, but even pointing the finger at China ignores the role played by automation. Many economists attribute changes in the composition of America’s workforce not to competition overseas, but to new ways of assembling products and providing services. The resurrection of trade barriers, many agree, serves as more of a means of delaying those forces, not stopping them, and that the answer lies in training workers in new skills so that they can more easily become a part of the modern global economy.