Metra CEO Don Orseno, a 43-year rail veteran credited with helping restore stability to the agency after years of turmoil, said on Friday that he plans to retire in December.The announcement comes two months after the Metra board handed him a $28,000 raise... 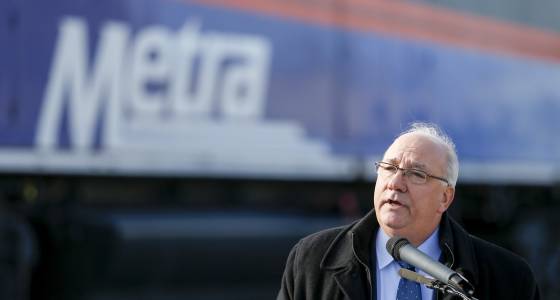 Metra CEO Don Orseno, a 43-year rail veteran credited with helping restore stability to the agency after years of turmoil, said on Friday that he plans to retire in December.

The announcement comes two months after the Metra board handed him a $28,000 raise – boosting his salary to $300,000-plus — though agency officials said this would not increase his pension.

Orseno, 62, said in an interview that he had been thinking about retiring for years and that he wants to spend time with his family, including his five grandchildren.

The Metra board will now conduct a nationwide search for his replacement, which should prove challenging given the complexity of the system, which runs 750 trains a day while having to share lines with freight rail and Amtrak. An Amtrak computer problem on Friday morning caused major delays.

The next Metra CEO also will have to contend with Springfield's ongoing budget crisis. The agency has gone years without a state capital program to upgrade its aging system.

Calling their chief executive officer greatly overworked and grossly underpaid in comparison to other big-city commuter rail executives, the Metra Board on Wednesday voted to give CEO Donald Orseno a $28,000 pay raise.

Calling their chief executive officer greatly overworked and grossly underpaid in comparison to other big-city commuter rail executives, the Metra Board on Wednesday voted to give CEO Donald Orseno a $28,000 pay raise.

During Orseno's tenure, Metra riders have had to dig deeper for fares, which have risen three times in as many years.

On the other hand, the agency has expanded the rail car and locomotive rehabilitation program, overhauled the agency police department, and deployed the Ventra app, which allows riders to buy tickets on their phones. The Metra website also has been revamped to make it easier to use, and Wi-Fi has gone into some cars.

The system's on-time performance has improved to 96.1 percent last year, compared with 95.4 percent in 2013 and 93.6 percent in 2011. "On-time" means a train comes within six minutes of its scheduled time.

Orseno became Metra's executive director and CEO in January 2014, having served as interim head of the service since August 2013. He replaced Alex Clifford, who was forced out and got a severance package valued at up to $871,000.

Metra CEO Don Orseno at the 49th St. yard facility along the Rock Island District Line on May 12, 2016.

Metra CEO Don Orseno at the 49th St. yard facility along the Rock Island District Line on May 12, 2016.

Clifford succeeded Phil Pagano, who killed himself in 2010 by stepping in front of a Metra train after allegations of financial misconduct.

Orseno said the agency was in a "tailspin" between 2010 and 2013, and that since then, Metra has been able to build a "great team" and restore public trust.

"Metra is a much better place. We're back on track," said Orseno, a former locomotive engineer. "We're light-years ahead of where we were several years ago."

"If Don Orseno hadn't existed, we would have had to invent him," said board member Martin Oberman, who had served as board chair until his term ended in November. Oberman said Orseno combined two key qualities which will be tough to match – a lifetime in the Chicago rail network and the talent to grow into a job as CEO.

Like Orseno, Oberman had been tapped as new leadership during a time of upheaval – he had replaced Brad O'Halloran, who resigned after heavy criticism. Oberman and Orseno had worked together on reforms to the agency, including the tough decision to raise fares annually as part of 10-year, $2.4 billion modernization plan.

DePaul University transportation expert Joe Schwieterman said Orseno deserves credit for taking the heat over the fare increases needed to improve the aging rail network. He said relations also have greatly improved between Metra and other transit agencies, which used to be at war.

"I have always enjoyed his no-nonsense approach to getting things done," said RTA executive director Leanne Redden in an email.

In a statement, CTA President Dorval Carter called Orseno "a tremendous leader" for Metra and transportation in the region.

"His vision, passion and dedication to the railroad industry will certainly be missed," said Carter.

Orseno began his career in 1974 as a ticket collector on Chicago, Rock Island & Pacific Railroad Co. commuter trains. He began working for Metra in 1984.

Former RTA head Stephen Schlickman said Metra was in "such a hole" that it seemed unlikely that a relatively unknown operations manager like Orseno could take on the negative perception of the agency in the eyes of the public and elected officials.

"He exceeded expectations and brought stability to the agency by putting it on a professional path to correcting it's systemic organizational problems," said Schlickman, a transportation consultant.

Metra's board voted in December to raise Orseno's pay to $317,500 annually, retroactive to Oct. 1. Metra spokeswoman Wendy Abrams said this would not result in an increase in his pension.

Pensions are calculated by determining the three highest salary years, tossing the highest year, averaging the remaining two years and then adding 15 percent, Abrams explained. Abrams said Orseno will not get a severance package.

In approving the raise, the board called Orseno overworked and underpaid compared with other big-city commuter rail executives. Oberman said Orseno had not indicated a plan to retire at the time.

Metra's board of directors has formed a committee to search nationwide for the agency's next executive director and CEO, with the goal of hiring someone this fall, according to a Metra statement.

Congressman Dan Lipinski, a Democrat who is Illinois' most senior member on the House Transportation and Infrastructure Committee, praised Orseno's tenure and said that it might be best to hire his replacement from the area, rather than bringing in another outsider like Clifford, who had been a Los Angeles train agency executive.

"It's most important to understand Metra to do that job," Lipinski said.