Starting pitcher Tyler Wilson looked like he might be overmatched by the star-studded Detroit Tigers lineup in the Orioles’ Grapefruit League opener on Friday, but he delivered a surprisingly tight two-inning performance during which he threw just 21 pitches... 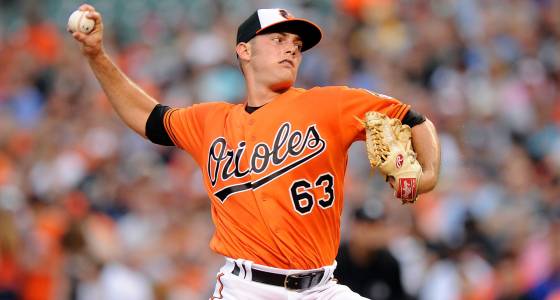 Starting pitcher Tyler Wilson looked like he might be overmatched by the star-studded Detroit Tigers lineup in the Orioles’ Grapefruit League opener on Friday, but he delivered a surprisingly tight two-inning performance during which he threw just 21 pitches and the heart of the Detroit lineup did not get a sniff.

Wilson needed just six pitches to retire veterans Ian Kinsler, Victor Martinez and Miguel Cabrera in the first inning. He needed a few more than that to get through the second, but struck out J.D. Martinez, got Justin Upton on a routine fly ball to center and retired Omar Infante on a foul pop to get his exhibition season off to a very uplifting start.

“For sure, it’s a great challenge out of the gate,’’ Wilson said. “February 24 or whatever it is today, and facing some of the best hitters in the game -- a great lineup -- that’s definitely a great challenge. That’s all the more reason to establish strikes early on.”

No one puts too much stock in the first exhibition appearance of the spring, and Wilson understands that, but he had to enjoy playing David to a lineup of Goliaths.

“As much as it’s about working on your delivery and timing and proving that you command the zone, at this stage of the game, it’s also good to be competitive and not fall behind guys like that because that’s when they can embarrass you a little bit,’’ he said.