FORT MYERS, Fla. – Mike Quade has managed minor leaguers for 20 seasons, so he has been proud of, and grateful to, ballplayers plenty of times. But maybe never more than Sunday.Quade, about to begin his third season leading the Twins’ Class AAA... 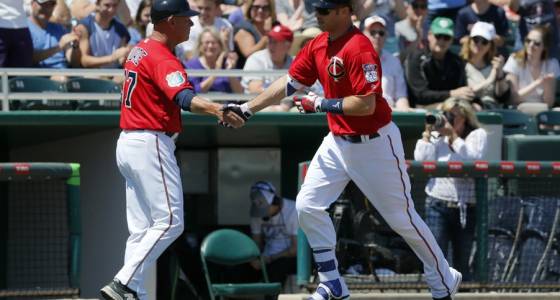 FORT MYERS, Fla. – Mike Quade has managed minor leaguers for 20 seasons, so he has been proud of, and grateful to, ballplayers plenty of times. But maybe never more than Sunday.

Quade, about to begin his third season leading the Twins’ Class AAA Rochester team, was sitting at a stoplight Saturday afternoon when a car slammed into his SUV from behind at close to 50 miles per hour, setting off a chain reaction that totaled his car and heavily damaged at least four others.

“I could see him coming in the rearview mirror. I don’t think he came within a mile of his brake pedal, because he never slowed down,” said Quade, who was returning to Twins camp with his girlfriend, Rebecca Kraus, after spending the afternoon with her parents. “About three seconds before he whacked us, I reached over to her and said, ‘Please, babe, hold on.’ ”

Police later told Quade the car appeared to be traveling between 40 and 50 mph as it approached the crowded intersection and smashed into his Toyota Highlander. The accident occured about 3 miles from Hammond Stadium.

“I remember it was the most godawful sound I ever heard,” Quade said Sunday. “The [air]bags exploded, all that. I’m still shook up. We can’t believe we’re not dead.”

The impact bashed his vehicle into the car in front of his, which held a woman and her two children, and it in turn crashed into a third car. Meanwhile, the blow also forced the out-of-control car sideways, where it slammed into a car holding four young men. As Quade tried to get his bearings after the crash and help Kraus, who was bleeding from the mouth and nose, the four men jumped out and rushed to their side. Tony Gutierrez, AP Mike Quade.

“Two of them went to Rebecca’s side and helped her get out of the car and off the road. They stayed with here and took care of her,” Quade said. “Two came over to me and said, ‘Sir, are you OK?’ Yeah, I think so. So they went to the car in front of me. There were two kids in there, but they were both belted in, thank God, and the mother was OK.”

Quade said his shoulder is sore from the crash — “It’s going to kill me to pitch batting practice,” he joked — but he’s otherwise all right. Kraus declined to go to the hospital, but she is sore from the impact and was examined by a doctor Sunday.

Paramedics and police rushed to the scene, and the driver who caused the wreck was taken away by ambulance (his condition was unavailable Sunday). As police gathered information from Quade, he mentioned he was in Fort Myers for spring training with the Twins. “And one of the kids says, ‘We play for the Twins!’ I said, ‘You haven’t played for me — I’m the Triple-A manager.’ “

The four are actually rookie level players, including catcher Ben Rortvedt, one of the Twins’ top prospects. Also in the car, coming back from a day at the beach, were pitcher Austin Tribby, outfielder Caleb Hamilton and infielder Dane Hutcheon.

“The kids did one hell of a job. They handled themselves so well, kept their heads, were so helpful,” Quade said. “They could not have been better. We’re as lucky as you can be.”