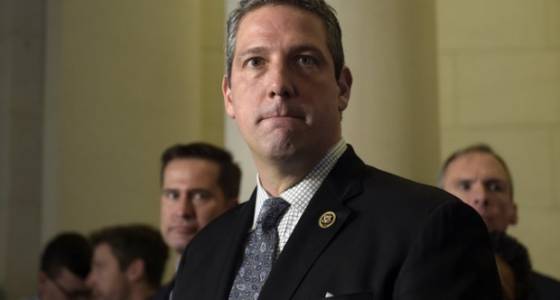 U.S. Rep. Tim Ryan rules out running for Ohio governor in 2018, leading Ohio Senate Minority Leader Joe Schiavoni to jump in the race (with other Democrats likely to follow). Donald Trump's proposed military funding hike, outlined in his speech to Congress, could mean more cash for Wright-Patterson Air Force Base. And a new study into Ohio's Medicaid expansion finds health improvements and an interesting political pattern. Today's Ohio Politics Roundup is brought to you by Jeremy Pelzer.

Tim Ryan says no to a gubernatorial run: Democratic U.S. Rep. Tim Ryan announced Tuesday that he will not run for Ohio governor in 2018, cleveland.com's Henry Gomez reports. Ryan said in a statement that remaining in Congress is the best way to help "constituents in my district [who] are at the forefront of an economic transformation that has hollowed out our nation's middle class."

The perks/problems of being a wallflower: The 43-year-old from the Youngstown area, who drew national attention last year for unsuccessfully challenging Nancy Pelosi as House Democratic leader, would have likely been the frontrunner in a gubernatorial primary race that has drawn interest from a cluster of current and former Democratic officials. But while 2018 may have been the best opportunity to date for Ryan to run for higher office (something he has repeatedly flirted with doing), Gomez points out that his decision was made easier by the plum congressional committee assignments he maintained on the Appropriations Committee and Defense Subcommittee.

Joe jumps in: With Ryan out, Gomez writes, Ohio Senate Minority Leader Joe Schiavoni quickly announced that he will launch his gubernatorial campaign on Wednesday. Schiavoni's move comes as no surprise: for months, the Boardman Democrat has said he was preparing to run for governor if Ryan didn't.

Open the floodgates: Gomez notes that Ryan's decision will also stir to action other would-be candidates who have been in wait-and-see mode. Ex-U.S. Rep. Betty Sutton says she will announce her plans next week. Dayton Mayor Nan Whaley may also be lured into the race now.

The president did lay out "five principles he wants 'as we move to create a better healthcare system for all Americans.' They include coverage for pre-existing conditions, tax credits and health savings accounts to help people pay for insurance, expansion of insurance sales across state lines and flexibility for governors whose states use Medicaid, 'to make sure no one is left out,'" Koff reports.

More cash for Wright-Patt? In his address, Trump talked about his plan to significantly boost defense spending. If Trump eliminates spending caps under sequestration, that would be good news for Wright-Patterson Air Force Base, writes Barrie Barber of the Dayton Daily News. But it could prove hard to win the 60-vote "supermajority" in the Senate needed to repeal the Budget Control Act, which imposed the spending caps.

Gibbs to hold Facebook 'town hall': Gibbs has scheduled a Facebook Live "town-hall" meeting for Wednesday at 7:30 p.m., pledging to "answer all of your questions (and I do mean ALL questions)," according to cleveland.com's Sabrina Eaton. Gibbs is one of numerous members of Congress under pressure from liberal activists to meet with constituents about plans to repeal the Affordable Care Act and other issues on President Donald Trump's agenda. Gibbs said he believes many recent calls for public town halls are from people who want a "dog and pony show" instead of a serious exchange of the sort he had with the groups he met with.

The case for relaxing Ohio's prevailing-wage law: State Sen. Matt Huffman, a Lima Republican, made his case Tuesday for his bill to allow local governments and universities to opt out of a state law requiring minimum wages and benefits for construction workers on large public projects, cleveland.com's Jackie Borchardt reports. One reason Huffman offered: transparency. Local governments, he said, are already finding "innovative ways" (of questionable legality) to get around the law, citing an unnamed village mayor in his district who arranged to have a buddy construct a building and sold it to the village at a lesser price.

"The Republican is scheduled to talk about health care during a stop at Frame USA in Springdale at 11:45 a.m.," the Enquirer reports. "The appearance is not open to the public."