CLEVELAND, Ohio – A top-five team from the start, St. Ignatius closes the regular season at No. 1 in the cleveland.com boys basketball rankings. The Wildcats began the year ranked No. 4 and took over the top spot Jan. 23, remaining there for the last... 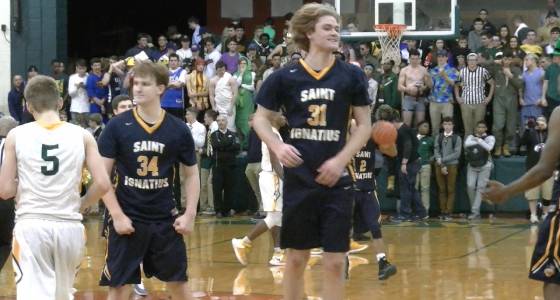 CLEVELAND, Ohio – A top-five team from the start, St. Ignatius closes the regular season at No. 1 in the cleveland.com boys basketball rankings.

The Wildcats began the year ranked No. 4 and took over the top spot Jan. 23, remaining there for the last month. Preseason No. 1 Lorain is fourth. Three teams jump into the final rankings, including 21-1 Woodridge of the Portage Trail Conference.

The boys basketball season is under way around the state and begins this week in Northeast Ohio with sectional play. Here is final Top 25 of the season:

Where they stand: The Wildcats, seeded No. 1 in the Strongsville District tournament, own signature wins against No. 2 St. Vincent-St. Mary and No. 3 St. Edward — twice — en route to being crowned the Cleveland area’s top team for the regular season. Their losses included defending Division I state champion Westerville South on the road in overtime and a season opener vs. Cleveland Heights, which they avenged late in the season.

Where they stand: Senior guards Jayvon Graves and Jon Williams have the Fighting Irish rolling into the Division II Canton District with 11 wins in their last 12 games. The 100-62 loss to Trotwood-Madison a day before Flyin’ to the Hoop in Dayton could be the turnaround moment for this group.

Where they stand: The Eagles might have turned a corner with a four-game win streak that includes Central Catholic on the road and a home victory vs. Michigan power East English Village Prep. Coach Eric Flannery recently inserted freshmen Grant Huffman and Devontae Blanton into the starting lineup, while utilizing high-energy players Demetrius Terry and Emmett Chambers off the bench.

Where they stand: The Titans take a 12-game win streak into the Division I Elyria Catholic District, where they are the top seed. Lorain finished eighth in the final Associated Press state poll, but finish behind St. Edward in these rankings for a 13-point home loss to the Eagles.

Where they stand: The North Coast League Blue Division champions lost only at Columbus St. Charles Prep and STVM — in overtime — and are the top seed in the Division I Copley District.

Where they stand: The Bulldogs closed with one of their top wins against Hoover, giving them some more momentum into the Division I Solon District.

Where they stand: The regular-season win streak is over at 46 games, and Copley will be seeded fourth in the Division I Canton District. The loss to Green in the finale came on the road vs. a team tested from the Federal League, but the win against Wooster handed that squad — seeded third in Canton — just its second defeat.

Where they stand: Yes, Benedictine lost last week. It came on the road to the No. 1-ranked team and without starting guard Chris Jefferson. That’s enough to push up the No. 1 seed in the Division II Stow District.

Where they stand: The Vikings closed with a one-point loss at Warren JFK, a Division IV contender, but they still won an outright NCL White Division title. VASJ also just beat JFK by 12 at home on Feb. 10 and owns a road victory at No. 2 STVM. Coach Babe Kwasniak’s outfit is the top seed for the Division III Garfield Heights District tournament.

Where they stand: A comeback from 17 points down saved Elyria’s hopes for a Greater Cleveland Conference title and could become a galvanizing moment for a team seeded No. 2 in the Division I Elyria Catholic tournament behind Lorain.

Where they stand: An impressive close to the regular season won Mentor a share of the GCC with Elyria, which it beat 61-49 on Feb. 17. Those two split their regular-season matchups, which keeps the Cardinals from overtaking them in these rankings. However, wins against Cornerstone and Medina should make them a scary matchup in the Division I Euclid District. Bob Krizancic’s crew is seeded second.

Where they stand: The top seed of that Euclid District goes to the Comets, who won it last year on a Cinderella run to the Cleveland State regionals.

Where they stand: The highest-ranking Division IV team, defending state champion and top seed at Orwell, Cornerstone lost a high-scoring test at Mentor in the regular-season finale.

Where they stand: The No. 2 seed in Solon’s Division I tournament, the Mustangs have hit a snag entering the postseason. They lost a high-scoring affair at Warren Harding and suffered an upset to Lake Erie League rival Warrensville Heights.

Where they stand: The Ironmen are seeded third in the Division II Stow District behind Benedictine and Woodridge, but one of the area’s toughest schedules — including wins against Holy Name and Garfield Heights — lands them here.

Where they stand: The top seed in the Division I Alliance District, Ellet showed its grit in a close season finale vs. state-ranked Massillon Jackson.

Where they stand: Like Medina and Brunswick, two teams that were ranked ahead of the Tigers last week, this squad is struggling as the postseason arrives. However, Cleveland Heights once again pushed Lorain. No team in the LEL could beat the area power, and only North Canton Hoover and St. Edward managed it this season. That’s enough to elevate Cleveland Heights, the third seed at Euclid, up two spots.

Where they stand: The Bees are seeded second behind Hoban in the Division I Copley District. They have dropped four straight games, three to ranked teams and a fourth to Shaker Heights, which hasn’t been at full strength all year.

Where they stand: The Blue Devils also lost late to Shaker Heights, which could be a force as the third seed in Solon.

Where they stand: Lutheran East moves up a few spots thanks to a handful of losses by teams ranked here. The Falcons are the top seed in the Division IV Barberton District, looking for a return to regionals.

Where they stand: The Senate League champions return to ranked status after a week off but a resume that warrants their spot. They played the first half of the season without standout senior guard Isaiah Washington, but picked up steam in the second half — pushing Cincinnati Taft and scoring victories against Orange and Glenville. A 67-61 loss Feb. 17 to Lutheran East is all that bumped them a week ago. The Scarabs open sectional play Tuesday vs. Revere and are seeded fourth in the Division II Stow District.

Where they stand: The Panthers closed strong with convincing win at Clearview and will be the second seed in the Division III Garfield Heights District. They shared the Great Lakes Conference with Holy Name, splitting the season matchups against the Green Wave and twice beating a talented Bay team. There’s also that loss at the buzzer to No. 10 Elyria.

Where they stand: The Suburban League National Division champions closed with an 11-point loss at Green. They are the fourth seed at Copley.

Where they stand: The Bulldogs have been a model of consistency, which helps them grab the final spot. Woodridge is seeded second in the Division II Stow District after winning the Portage Trail Conference Metro Division.