Mayra Contreras, hands on hips, apron already smudged, called for attention from more than a dozen children and teens. In 15 minutes, they would be handing out fresh produce to residents of New Columbia and needed to prepare. "Do we have someone for bread?... 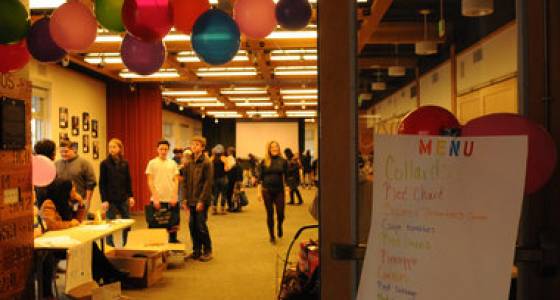 Mayra Contreras, hands on hips, apron already smudged, called for attention from more than a dozen children and teens. In 15 minutes, they would be handing out fresh produce to residents of New Columbia and needed to prepare.

"Do we have someone for bread? Who wants to be at the bread table?"

"Who wants chard? We need someone to do chard still."

A first-grader stepped up and Contreras helped the girl stand on a chair so she could see over the heaping piles of rainbow chard that she had to hand out to food pantry shoppers.

As one of the oldest organizers of the New Columbia Harvest Share program, Contreras knows how to delegate to make the pantry run on schedule. She helped come up with the idea, recruit neighborhood kids to work it and has been there nearly every weekend for a year now.

She's trying to solve a problem she first heard described as "food insecurity" three years ago.

In 2014, Urban Institute, a Washington, D.C.-based think tank that focuses on economic and social policy research, interviewed children and teenagers about how they ate. The participants were spread across the country - including Chicago, Washington, D.C., and New Columbia, a subsidized housing community built by Portland's housing bureau.

The study found that many took major risks to get a meal -- shoplifting, selling drugs, failing school, getting arrested or trading sex.

Contreras was part of the original study and over the years became comfortable talking to her peers and friends about hunger and other day-to-day issues they face but rarely acknowledge to each other.

As the doors opened last Saturday and more than a hundred people filed through the food stations in an hour, Contreras and the other kids who run the pantry proudly pointed out that this isn't the haves giving to the have-nots.

They're shopping for their own families, too, and speak to the customers in their own languages - Somali, Arabic, Spanish.

No time to wait

Faiza Jama thought she would never know the ache again when she moved to the United States with her family. In Somalia, she watched her father work constantly to provide food, she said, but there never seemed to be enough.

"Those things can happen because it's not a stable county," Jama said. "But I thought, oh that doesn't happen in America. It was a shock."

She was still surrounded by hunger when she moved to New Columbia.

Her siblings were attending the group that grew out of the Urban Institute's study, the Youth Community Advisory Board. Jama joined and appreciated the safe space to talk and hear her friends and classmates discuss the same issues.

"Nobody really wants to talk about 'why I steal from the store or why you sleep with older men,'" Jama said. She also seized on the opportunity to take action.

The youths wanted to extend the comfort they felt with each other to the people coming to the food bank. They tried to orient the program to kids who could come and shop for their families. They hoped to empower people their own age, as they had been.

"I couldn't wait for adults to make change, it's something we have to take initiative over and do something about," Jama said.

New Columbia's residents are in the cross-hairs of national and local conversations right now. Many of the families are refugees from Muslim countries and Latino immigrants. The community includes public housing and affordable rental housing, as well as a senior center.

The youths involved in Harvest Share often hear about the negative parts of their neighborhood. Teeba Mohammad, 14, was struck by how moved older people in the community were by the pantry - thanking her and encouraging her to continue.

"It's a really powerful thing there are people our age and younger making changes in the community," Mohammad said.

Assefash Melles has worked with the group throughout the process as a mental health counselor and provides the adult oversight for the program. She's watched the quietest teens in the group become leaders.

And she's relieved that they're building on ways to stop some of the risky behaviors she's seen, especially girls who become estranged from their families when they date older men and then become prey for sex trafficking and assault.

It's rampant among poor kids in cities big and small across the country, Melles said. The original study estimated that 6.8 million people between 10 and 17 struggle with hunger. At every place the Urban Institute surveyed, girls reported trading sex for money or gifts. Kids as young as 7 said they stole food or stole expensive items to sell and then buy food.

All of those actions can lead to criminal records or homelessness.

Melles cultivates the drive the youths already have to make their situations better into programs like Harvest Share. The Oregon Food Bank runs 38 high school food bank programs in the Portland area, but none are led by kids. Melody Martinez, the Oregon Food Bank coordinator for community food programs, makes sure fresh produce shows up every month.

Then, she stands back with Melles and watches the kids push through Harvest Share days like old pros.

Martinez said New Columbia's Harvest Share is also unusual in that teenagers are the focus. Much of the U.S. policy around hunger focuses on young children. "So it ends up leaving a lot of teens in the dark or unseen in a way," Martinez said. "This was a really great way to target these teens and get them involved in the process."

Contreras and other graduating seniors incorporate their Harvest Share volunteer work into college applications and scholarship essays. Others among the New Columbia kids are talking to other low-income and minority communities across the country about how replicate their success.

"The more they talk about it, the more they find what their passion is like," Melles said. "The shame -- the stigma -- is slowly removed from that."

With Year One down, the momentum is building. Sergio Contreras, who was first dragged into the program through his older sister Mayra, is 14 and taking on more leadership roles.

He and friends in the program are telling the story of the food pantry to adults and people his age. As he walked through last Saturday's bustle, he was certain the program could be sustained.

Even at the beginning, he said, when only a four or five people showed up each week, he gave up part of his Saturday to make sure it happened. He put more time into talking it up to friends and recruiting younger kids to replace the older ones about to leave.

"I think I had just put in too much time to just give up on it," he said.