CLEVELAND, Ohio -- In a series of roundtable interviews released by Warner Bros. Thursday, the stars of the upcoming film "Kong: Skull Island" talked about what it's like to work with an enormous CGI gorilla. The movie is set in 1973 and tells the story... 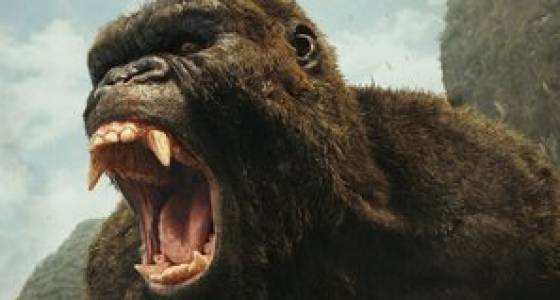 CLEVELAND, Ohio -- In a series of roundtable interviews released by Warner Bros. Thursday, the stars of the upcoming film "Kong: Skull Island" talked about what it's like to work with an enormous CGI gorilla.

The movie is set in 1973 and tells the story of a group of soldiers who embark into the Pacific Ocean to survey mysterious island whose largest occupant turns out to be a monstrous gorilla named King Kong.

"Skull Island" is a take on the 1933 classic "King Kong," one of the most iconic movies ever made. "Kong" has been remade twice, most recently by "Lord of the Rings" director Peter Jackson in 2005.

In the 2017 film, Samuel L. Jackson plays a military leader bent on killing the gorilla, while Brie Larson and Tom Hiddleston play a photo journalist and a tracker to try to save it. John Goodman plays a government official hoping to return home with proof of the beast's existence.

The giant creature at the heart of the film was created almost entirely through CGI that was inserted after filming, requiring the cast to act out scenes without seeing what they were supposed to be looking at, or in some cases, touching.

In many scenes, the filmmakers used props indicate where King Kong is walking, standing, or lying down. But the actors told reporters in a series of interviews that none of those props looked anything like a gorilla.

In one case, John Goodman said, they used a tennis ball. He did not elaborate on how a tennis ball was supposed to stand in for a giant gorilla.

This inspired numerous questions by the actors. Where is the beast in this scene? How fast is it moving? And how big is it?

Samuel L Jackson told reporters that he wasn't always given satisfying answers to those questions, or received different answers depending on who he asked.

Larson, whose character frequently interacts with Kong in the movie, said she would often ask about the creature's expression. Did it look like it wanted to eat her, or was it friendly?

"You have really weird conversations with your director that are different than other films," Larson said. "With other movies, you're playing with another person, with this, you're starting with a complete unknown."

Jackson referred to a scene near the end of the movie that features Kong walking out of the lake and then falling down in front of him.

"This is the one time we're actually close enough to touch this thing," Jackson said. "When you're standing there by its head, you want to know for real how big it is."

Jackson said he needed to know how close the creature was to his character, whether it was looking at him, and if it was breathing.

"If he's not dead and he's breathing, my clothes should move," Jackson said. "Logically, people hadn't thought about that," he said.

In normal cases, actors can take their cues from other actors, but in this case, it took a great deal of imagination. Goodman implied that it wasn't difficult for him.

"We used to do plays in the church basement and you had to use your imagination," he said. "That's a place where I live every day anyway."