NDP Leader Andrea Horwath says she can cut hydro bills up to 30 per cent under a plan that lets consumers opt out of time-of-use pricing, caps profits for private producers and returns Hydro One to full public ownership.New Democrats would also ask the federal... 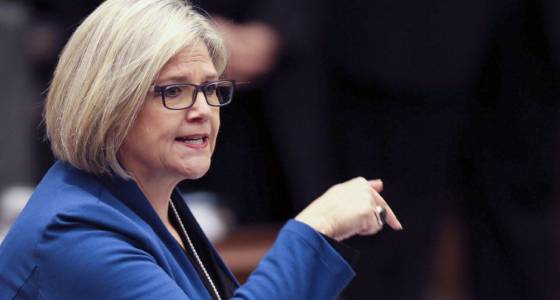 NDP Leader Andrea Horwath says she can cut hydro bills up to 30 per cent under a plan that lets consumers opt out of time-of-use pricing, caps profits for private producers and returns Hydro One to full public ownership.

New Democrats would also ask the federal government to scrap its 5 per-cent HST on electricity bills under the 13-page proposal unveiled Monday, ahead of the government’s promised rate-relief package expected soon.

“It would be fantastic if the Liberals took this plan and implemented it,” she told reporters, accusing Premier Kathleen Wynne of ignoring skyrocketing hydro prices until they became a “political problem” for her.

“Electricity isn’t a luxury. It shouldn’t be priced like one,” Horwath said.

“We’re at a tipping point in Ontario and we’ve got to take bold action.”

Horwath said high delivery charges for customers in rural and northern areas would be “equalized” in the form of lower urban distribution charges by reducing the fees Ontario Power Generation pays for water flowing over its dams. The savings would be used to subsidize the rural delivery costs.

Under her plan, customers would be able to opt out of time-of-use pricing, which charges higher rates for power during the day and has a lower, off-peak rate from 7 p.m. to 7 a.m. on weekdays and on weekends and holidays.

That would allow them to pay 10.3 cents per kilowatt hour, the same off-peak rate under time-of-use pricing, a system brought in several years ago to encourage people to avoid using electricity during peak daytime hours.

But that doesn’t work for seniors and many shift workers who are at home during the day, said Horwath. She called time-of-use pricing “a completely failed experiment.”

Energy Minister Glenn Thibeault has hinted that people may soon be able to abandon time-of-use pricing, and that pilot projects are about to get under way.

According to the NDP plan, buying back Hydro One could be done using dividends the province still collects from the portion of the utility it still owns (70 per cent).

Horwath said an NDP government would attempt to renegotiate expensive private power contracts (as the Liberal administration did with deal with Samsung), but did not build any assumptions about that into its plan.

In the legislature’s daily question period, Wynne said she is “very concerned” about problems, such as the high rural delivery charges, and urged Horwath to stay tuned for changes the Liberals will soon reveal.

“She should be very pleased with the plan that we’re going to bring forward,” said Wynne, whose government began waiving the 8-per-cent provincial portion of the HST on hydro starting Jan. 1.

Hydro rates have doubled in the last 10 years.

Just get rid of the CEO and Wynne

I d'ont care what wynne does, its to late, the liberals will never get a vote from me

Give homeowners a real incentive to go green
Ie solar or wind
This would reduce demand on the grid and allow us to decommission the stupid windmill idea on a provincial scale.
Each home could supplement the grid and save personal dollars.
That will never happen since the public utilities have no interest in conservation.....only in revenue generation.
Only in government do we become more efficient and yet spend more money.

Horwath is right, the time of use hydro is crazy. I am a senior on a fixed income , home all day. Scared to turn lights on and do my laundry after 7 pm. Not sure how seniors are suppose to enjoy their retirement when doing house work after 7pm.