Galleries Videos CONTACT ADVERTISE
Famagusta 23°
clear sky
BUSINESS EDUCATION ENTERTAINMENT HEALTH POLITICS SCIENCE SPORTS TECHNOLOGY
12:08 Guide To Online Sports Betting: How To Choose A Sportsbook
08:28 What Are Some Reasons to Consult a Brain Injury Lawyer?
09:24 Blockchain Solutions for Enterprises: How To Increase Efficiency And Profitability
07:06 How To Deal With A Car Crash In New York
17:43 Tips to keep in mind while choosing the casino site
11:34 Relation Between Employee Theft and Pre-employment Screening Check
04:37 Search your own desired site to play sports for betting
18:00 Top 3 Career Path Options for Business Analysts Preview
15:35 The history of Imen Jane, who is the influencer and the charges on the...
18:48 Sebastian Vettel's Greatest Races
BIST
1124
GOLD
458.727
USD
7.6460
GPB
9.7703
EUR
8.8844
Breaking News
Top 3 Career Path Options for Business Analysts Preview
Close

In the vastness of the Field Museum, the new meteorite display is just a little corner of cases and video screens tucked on a back wall of the second floor, far away from the showpiece attractions.It is, literally, at the opposite end of that great central... 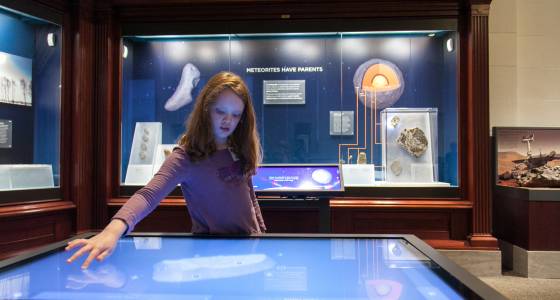 In the vastness of the Field Museum, the new meteorite display is just a little corner of cases and video screens tucked on a back wall of the second floor, far away from the showpiece attractions.

It is, literally, at the opposite end of that great central hall from the exhibit that explains Sue, the museum's prized T. rex specimen.

But, first, it is superb — a layperson's guide to the fallen space rocks that can leave you surprised at how much time you've spent learning about rocks in an area without a big sign or a related T-shirt in the gift shop.

The Field has "the world's largest collection of meteorites at a private research institute," says Philipp Heck, the scientist in charge of these "chunks of rocky material and metal," and the new showplace "allows us to display some of our stars from the collection."

And, second, it is an important symbol of how museums work. The great ones seem so monumental, so permanent. But inside, there is, or ought to be, a kind of slow-moving turmoil. Information screens are being updated. Committees are meeting about bringing such-and-such a section into the modern era. Specimens are making their way out of drawers and into displays. The river of information is continually carving a new path.

The meteorite display, which went up about a month ago, replaced a display of Buddhist deities that was rendered somewhat extraneous when the museum opened its new Hall of China. Now the meteorites are with other stones, in between the Hall of Jades and the Hall of Gems.

A replica of a meteorite from Mars that you can touch on display at the Field Museum.

A replica of a meteorite from Mars that you can touch on display at the Field Museum.

On display are meteorites — chunks of asteroid that have fallen to Earth — from Mexico, from Africa, even a replica of one from Mars that you can touch. Some are sliced to show their innards. Some are in raw chunk form. "There is no other museum in the Western hemisphere that has fossil meteorites on display," says Heck.

He recalls getting a question once from a visitor: "She said, 'Why are you studying meteorites? They're not even pretty.' I consider meteorites books of natural history that need to be read."

What they let scientists do, he says, is "basically, stellar astrophysics" from the comfort of an earthbound lab. "Asteroids are so, so rich in information." Another Field geologist has called them "a poor man's space probe."

In its back rooms upstairs, the Field has drawers of meteorites that are available for study.

In the display, a touch-screen table lets you enter the very center of a meteorite. "You are playing with scientific data," it says. "When Field Museum scientists need to look inside a meteorite — to find the best place to reach mineral inclusions, for example — they use the same digital models you are using in this interactive touch table."

"This is where we hope our scientists of the future get turned on," says Matt Matcuk, the museum's exhibition development director. Many visitors, he allows, will look and say, "a bunch of rocks." But in some, the spark might be lit.

And through it all, there is the power of meteorites, which have played significant roles in shaping life on Earth. Look a few galleries away, for instance, to learn the story of the dinosaurs, which did not end well.

Just as the new exhibit was opening, a meteor was spotted streaking across Chicago's night sky, a giant greenish fireball captured on multiple video cameras throughout the region.

That portion of an asteroid landed in Lake Michigan off of Sheboygan, Wis., in pieces. Heck wants some of those rocks and has thought about how it might be possible to get underwater and recover some of them.

But it also — like the giant meteor that exploded over the Russian city of Chelyabinsk in 2013, and now has some of its pieces at the Field — was a bit of a wake-up call. "Chelyabinsk reminded us how vulnerable we are here on Earth," Heck said.

The new meteorite display doesn't play up the disaster movie potential of these rocks, but if you miss it, you aren't thinking very hard.