In the wake of the Trump administration’s decision to roll back protections that allow transgender students to use bathrooms based on their gender identity, artists across the continuum have taken to social media and the airwaves. At... 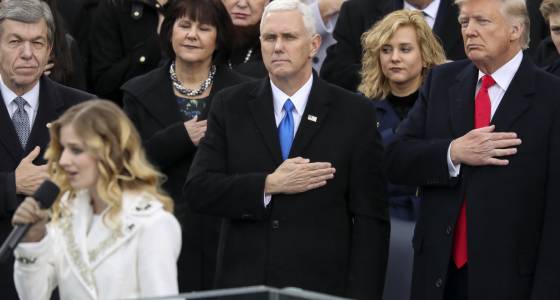 In the wake of the Trump administration’s decision to roll back protections that allow transgender students to use bathrooms based on their gender identity, artists across the continuum have taken to social media and the airwaves.

At the top of the list? Beyoncé, who posted on her Facebook page Thursday in support of transgender rights. Using the hastag #protecttransyouth, the artist linked to the advocacy group GLSEN’s “100 Days of Kindness” page.

The teenage vocalist Jackie Evancho, who has a transgender sister and performed at Trump’s inauguration, delivered a series of tweets that decried the president’s actions. “I am obviously disappointed in the @POTUS decision to send the #transgender bathroom issue to the states to decide. #sisterlove.”

She followed that with an invitation to the president, and a photo of her with her sister Juliet.

On Thursday, White House Press Secretary Sean Spicer was asked about Evancho’s invitation, and he replied: “Yeah, I think the president would be welcome to meet with her.”

In an interview with CNN later on Thursday, Jackie and Juliet Evancho expressed hope that they would, indeed, get to make their case directly to the president, with Jackie wondering whether there might be a way “we can create a federal law or something” to prevent such discrimination.

The sibling duo Tegan and Sara, longtime advocates of LGBTQ rights, took to Instagram to offer a defiant statement.

It concluded: “LGBTQ people are POC, Muslim, Refugees, Immigrants, Disabled, Democrats, Republicans, World Citizens, Kids, Senior Citizens! When they come for some of us, they come for all of us!”

The punk rocker Laura Jane Grace of Against Me! embedded a headline pulled from Rolling Stone magazine:

The gender-fluid musician Mykki Blanco was more direct. She tweeted a photo of herself from the battle lines:

And, amid a series of retweets, the musician and actor John Legend expressed his outrage, culminating in a link to an essay by writer Janet Mock.

Expect to hear many more defiant voices from the creative community in the days leading up to and during Sunday’s Academy Awards broadcast.