Max Verstappen also looted Monza, Ferrari's home, as he did in April at Imola. 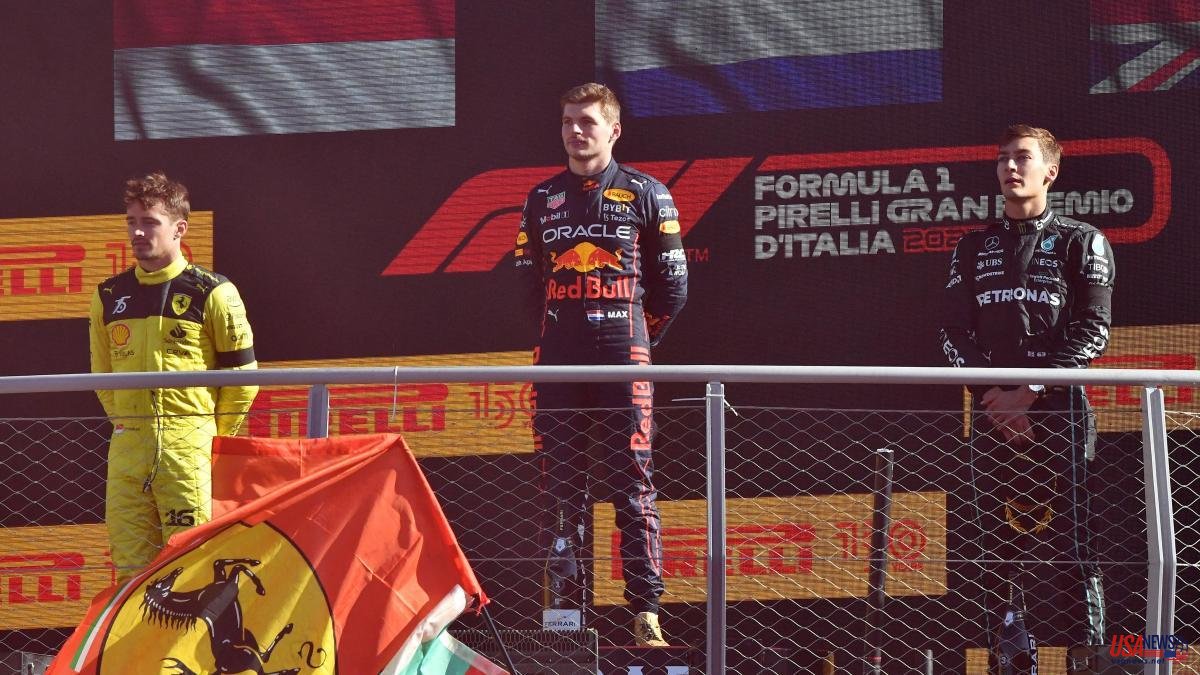 Max Verstappen also looted Monza, Ferrari's home, as he did in April at Imola. He did not find relief for the Italian Scuderia with a victory for Charles Leclerc that seemed feasible in his fiefdom, and those from Maranello bowed the knee to the leader, devastating once again, who took his 11th victory of the season in 16 races. A scandal. Like the 116 points advantage of the Dutch over the Monegasque.

On the grid with the most disordered hierarchy, the only status that remained unchanged was that of poleman Leclerc. At the start, the Monegasque closed in on an incisive Russell who tried an outside in the first variant but went wide and had to limit the chicane. Third was Ricciardo taking advantage of the fact that Norris was stuck, squeezed by a wild Verstappen, from 7th to 4th with his soft tire with more grip. Behind the champion, Gasly, Norris and Alonso, who lost a position.

The Dutchman, in devouring mode, was already third on the second lap, overtaking Ricciardo on the straight. Behind advanced the greats who had been punished. Sainz was 15th by lap two and Hamilton had only gained one position, 18th.

The Dutchman was unstoppable, running in another orbit. In the fifth lap he already conquered second place to Russell to go chase the leader Leclerc. He had it to 2.1 seconds. Any. The chase for victory began, the duel was served.

Behind, Sainz continued to climb, 10th on lap six, 7th on lap 10, after overtaking his friend Alonso. He would soon contact the prepodium positions with a racing car superior to that of the peloton.

And meanwhile, lap 11/53, Verstappen was on top of Leclerc, 1.2 seconds behind. Sainz moved closer, 6th after passing Norris and 5th passing Gasly. He had the podium with 22 seconds to go, the time to overtake Ricciardo and contact Russell.

Ferrari began to make a move with Leclerc, whom he stopped on lap 13 to fit the medium tire. Verstappen, who opted for the tactic of stretching the softs as much as possible, assumed the provisional leadership, with Russell second, Leclerc third and Sainz fourth. Hamilton continued to climb, more slowly, to 11th place (v. 17/53).

The laps fell and paradoxically Leclerc could not get closer than 14 seconds to Verstappen -who would have to stop-, despite having newer tires on Ferrari. “We are going to plan C”, they told the Monegasque from the red wall (v. 22/53).

Sainz was provisionally installed on the podium on lap 24 when Russell stopped to put on the hard rubber, which he would wear until the end of the race. The fight for the podium would be between the man from Madrid and the Englishman from Mercedes.

Verstappen stopped halfway through the race, on lap 26 – thirteen after Leclerc – to fit his medium tyres, and returned to the track second, 10.4 seconds behind the Monegasque. That was the challenge of the champion: cut that time to the Ferrari, which had average tires 13 laps older. That was the Dutchman's advantage. Would he make it in the remaining 26 laps? A survival race began for Leclerc.

Sainz changed his medium tires for soft ones on lap 31. This time the stop was very good (2.3 seconds). He fell back to 7th but would have the grippier tires to climb onto the podium, with Perez, Hamilton, Norris and Russell ahead.

One lap later, Alonso stopped in the pits, but retired due to a breakdown of the Alpine -apparently due to hydraulic pressure-. The Asturian's streak of consecutive scoring races was cut short, which remained at 10 with the previous one from the Netherlands.

Ferrari changed tactics with Leclerc. He went from chased to chased by mounting soft tires for the last 19 laps. He had Verstappen 19.4 seconds behind, a disadvantage that he could a priori cut with the new tires with more grip. But that was just theory.

The Monegasque began to set better laps in the race, but he was barely repelling time from Verstappen, with a devilish pace despite his harder and older tires. Victory eluded Ferrari because the Red Bull had more pace in any circumstance. With 10 laps to go (43/53), Verstappen held a lead of 17.8 seconds, enough to take victory.

While Monza dozed off yawning, the appearance of a safety car due to Ricciardo's accident seemed to revive the race with five laps to go (48/53). A last general entry to the pits was rushed to change the tires, white, logically. Same weapons for everyone, but instead of Leclerc being 17 seconds behind, he would now stick to Red Bull's ass, and in turn, Sainz could smack Russell for the podium.

But before the race could be relaunched, Ricciardo's McLaren had to be removed from the track. It took forever for the track marshals to take the crane and get the car out, while the laps were falling. Surprising that this happens in Italy, playing at Ferrari's house...

In the end the McLaren retired and the safety car was withdrawn with only one lap to go, so the race could not be restarted and ended in single file behind the peace-keeping green car. The worst ending for the tifosi, who were left with no chance of trying to win, and for the fans, who stole the show.

"It was frustrating to finish like this, I would have liked to try to attack at the end and win against the tifosi we have here", admitted Charles Leclerc, the big loser in Monza. His face was the picture of disappointment.