The wait, in Moncloa's opinion, was worth it. 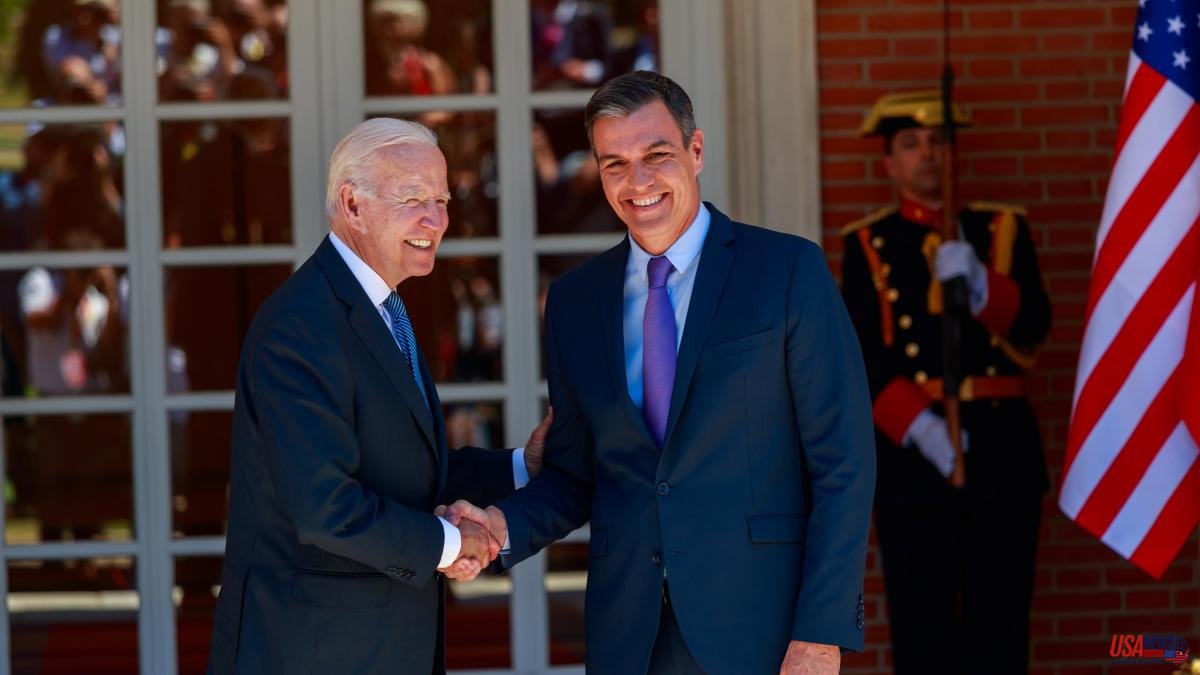 The wait, in Moncloa's opinion, was worth it. A year and a half after becoming the 46th. President of the United States, Joe Biden parked his imposing armored vehicle –nicknamed “the beast”– early yesterday afternoon in front of the steps of the Moncloa Palace, which Pedro Sánchez descended to offer him a warm welcome.

Both presidents had already coincided on other occasions in the round of international summits that mark their agendas, with fortuitous meetings that sometimes frustrated the high expectations generated in Moncloa. But yesterday Biden wanted to reserve a long hour of his millimetric agenda to meet yesterday with Sánchez, in their first official bilateral meeting, taking advantage of the fact that the Spanish chief executive is the host of the NATO summit that formally starts today in Madrid.

The president of the United States began by stamping his signature and dedication in the Moncloa honorary book, then he met alone with the Spanish president –in a “very warm and personal” meeting, Biden stressed–, and finally both met full delegations, including Ministers José Manuel Albares and Margarita Robles, as well as the US Secretary of State, Antony Blinken. “It has not been just another meeting”, they highlighted in Moncloa.

This was not a mere protocol meeting, but on the table was the first joint declaration that Spain and the United States sealed, according to Sánchez, for more than twenty years. Specifically, from the one that Foreign Minister Josep Piqué and Secretary of State Madeleine Albright signed in Madrid in January 2001, during the mandate of José María Aznar and Bill Clinton, and which even then promoted the modernization of military bases of Rota and Moron.

The great novelty of the joint declaration signed yesterday in Moncloa urges precisely to update the defense cooperation agreement that presidents Felipe González and Ronald Reagan sealed in 1988, to expand the NATO anti-missile shield deployed in the Cadiz base. "Spain and the United States -says the document- intend to expand their defense cooperation through the permanent stationing of additional US warships in Rota". In practice, the project is for two other destroyers from the United States to join the four that are already installed at the Cadiz base.

Government sources indicate that the agreement will have to be approved by the Council of Ministers, and subsequently validated by Congress. Biden trusted in any case that it can be produced "sooner than later". And in Moncloa they did not want to start thinking yesterday with which parliamentary majority they could manage to ratify the agreement, given that the news will not be well received by United We Can, a partner in the government coalition, nor by the rest of the leftist formations.

Sánchez and Biden starred at the end of their meeting in a brief appearance without questions before the press, in the Barceló de la Moncloa room reserved for big occasions, in which they expressed the strength of the alliance between the two countries. "Spain and the United States are allies, we are strategic partners and we are friends," Sánchez stressed. "Our great friendship makes us strong allies," confirmed Biden, who described Spain as an "indispensable ally."

The meeting served, in Moncloa's opinion, to "expand, strengthen and update" relations between Spain and the United States, and the joint statement captures, in just four pages, a wide catalog of common interests to promote, in terms of defense , economy, justice, migrations, democratic values ​​or energy security.

At the meeting, in which, according to government sources, Biden was interested in the management of migratory flows carried out by the Government of Spain, the recent humanitarian tragedy at the Melilla fence, nor the one that occurred in Texas, with dozens of migrants killed in both cases. One of the points of the joint declaration, however, shows the intention of both countries "to collaborate in a comprehensive approach to the management of irregular migratory flows that guarantees fair and humane treatment of migrants."

The bet is also joint to collaborate in "increasing the geographical diversification of energy sources, especially natural gas", after the war unleashed by Russia in Ukraine. Sánchez expressly thanked Biden for the liquefied natural gas that the United States exports to Spain.

The NATO summit formally starts today, with a political scenario that is nonetheless very complicated for Sánchez at the domestic level. And without facilitating even formal tunes. It should be noted in this regard that both the leader of the main opposition party, Alberto Núñez Feijóo, and former Prime Minister Felipe González are upset that they have not been invited to any event. In Moncloa, however, they allege that NATO summits involve the heads of state and government of the member countries, as well as the foreign and defense ministers.