Satellite shows Russian fighters destroyed after explosions at Crimean base

The confusion surrounding the authorship and cause of the spectacular explosions on the Russian air base in Crimea, a peninsula annexed by Moscow in 2014, continues this Thursday, more than 24 hours after the attack last Tuesday afternoon, but at least the satellite has shed light on the unknowns regarding the extent of the destruction. 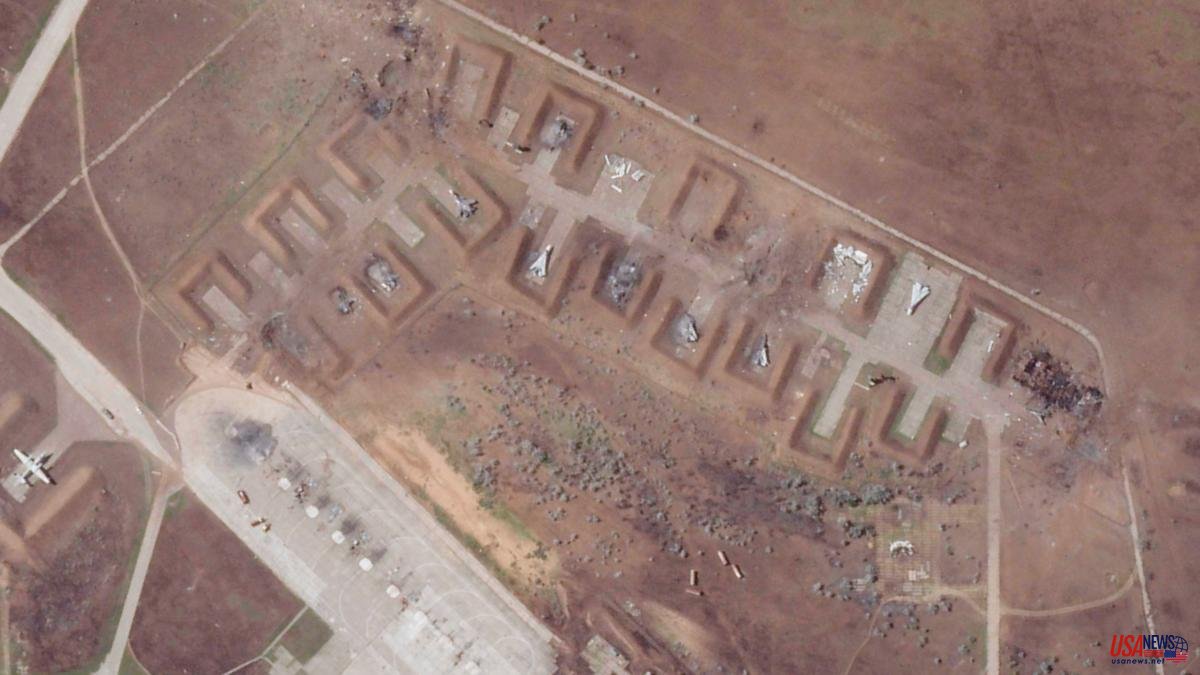 The confusion surrounding the authorship and cause of the spectacular explosions on the Russian air base in Crimea, a peninsula annexed by Moscow in 2014, continues this Thursday, more than 24 hours after the attack last Tuesday afternoon, but at least the satellite has shed light on the unknowns regarding the extent of the destruction.

The images captured on Wednesday show the remains of at least eight Russian fighter planes, although Ukraine has raised the number of aircraft destroyed to nine. At least two square kilometers, a field full of craters, were leveled at the Saki military airfield in the west of the disputed peninsula.

However, Moscow, which attributes the cause to the negligence of a soldier working with ammunition, assures that none of its planes were damaged, although one person died, 14 more were injured and dozens of nearby houses were affected.

Ukraine has not publicly claimed responsibility for the attack, although sources close to Kyiv confirm this. The official version of the Ukrainian government strangely coincides with that of the Kremlin. Ukrainian Defense Minister Oleksei Reznikov has bought into the explanation of his Russian counterpart, who understands the explosion as the result of human error while handling ammunition that they say was detonated in a storage area inside the facility. The Ukrainian minister has hinted that it was caused by a lit cigarette butt.

But sources close to the Ukrainian president, Volodymyr Zelensky, have admitted the hand of Kyiv. One of his advisers, Oleksi Arestovich, points to members of the Ukrainian resistance in Crimea or long-range missiles as the cause of the explosions, while another Ukrainian official blames the action of the Ukrainian special forces. Ukrainian military analyst Oleh Zhdanov has assured that "the army unofficially admits that it was a Ukrainian attack." And he points to long-range anti-ship missiles as a possible cause.

The base, located at least 200 kilometers from the nearest Ukrainian position, includes bunkers and hangars, usually used to store ammunition in case of fire, but none appear damaged, according to satellite images.

The Institute for the Study of War (ISW), based in Washington, dismisses the theory of the accident because there were two simultaneous fires in two different places on the base. But, on the other hand, he does not reject the hypothesis of sabotage or missile attack.

“The Kremlin has little incentive to accuse Ukraine of being behind damage-causing attacks, as it would demonstrate the ineffectiveness of Russian air defense systems,” ISW states.

The base serves as the home of Russia's 43rd Independent Naval Air Assault Squadron since Moscow seized Crimea. The squadron flies Sukhoi Su-24 and Sukhoi Su-30 aircraft, with which it has carried out several strikes since the start of the Russian invasion on February 24.

Ukrainian President Volodymyr Zelensky himself referred to the attack in his speech on Wednesday night. "In just one day, the occupiers lost 10 warplanes: nine in Crimea and one more in the direction of Zaporizhia," he noted. "The occupiers also suffer new losses of armored vehicles, warehouses with ammunition, logistics routes," he added.

On Tuesday afternoon, the noise of explosions and a huge smoke caught bathers off guard on the beaches of the Ukrainian peninsula, a popular Black Sea tourist destination for many Russians. Russian authorities first declared a state of emergency, but later downplayed it, saying all hotels and nearby beaches were untouched. However, people fled in their cars.