Pogacar's challenge in the Pyrenees to catch up with Vingegaard 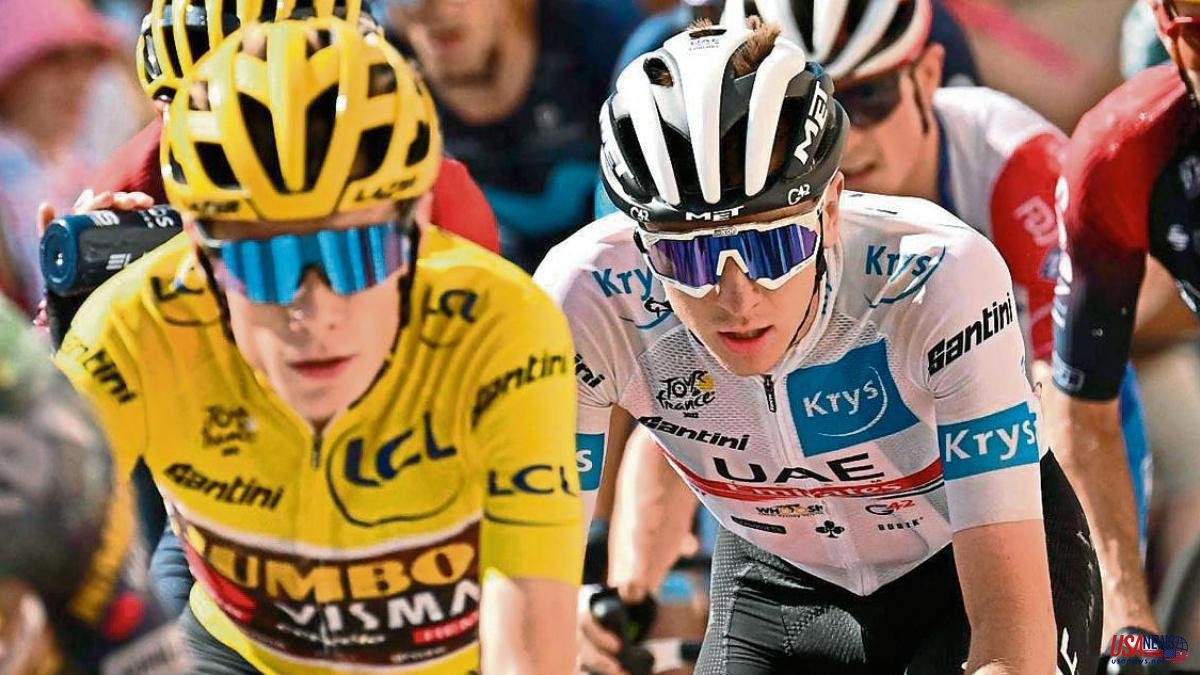 Two minutes and twenty-two seconds. 2m22s. Three ducklings. That is the distance. That's where Jonas Vingegaard's income was established. That is the disadvantage that Tadej Pogacar has in the general classification. This is how the two great favorites of the Tour del Col du Granon d'Huez came out and nobody has been able to move those two minutes and 22 seconds that separate the Dane and the Slovenian. Neither in the Alpe d'Huez nor in the arrival in Mende were there any differences between them. 2m22s: that time is the one to memorize.

The roles have been exchanged. Last year, Pogacar was the leader and looked from his vantage point more than five minutes high at Vingegaard, who had taken over from the fallen Roglic. Now the yellow jersey belongs to the Jumbo rider, with the UAE rider needing to attack again and again in the Pyrenees to get closer in the standings. “I need to attack on every climb and try to make up time. I will give it all. My legs are fine and I'll have to make an attacking run”, declared the Slovenian without hiding on the rest day.

Ahead they have a port of second, six of first and two of special category in the next three days. Starting today with the Port de Lers and the Mur de Péguère, on top of it, with three consecutive kilometers above 10%, a wall that, in theory, is well suited to the explosiveness of the double champion, who since his fainting spell has been puncturing bone every time he tests the aspirant.

Vingegaard is solid, he is strong, he is reliable and he is very confident, as well as having an interesting advantage. He looks armored. And yet, there is an unknown point about him, because he has never been so pressured and because of the strokes of genius that accompany the Pogacar legend. “If I win the Tour I win it, but I don't punish myself every second telling myself that it is an obligation to achieve it. I'm fine and I'll do my best to win the race”, affirms the yellow jersey.

One of the great arguments of the Dane to emulate Riis was the Jumbo-Visma. But on Sunday he lost two of his best soldiers for the mountains: Kruijswijk and Roglic, two cyclists who know what it's like to get on the podium in Paris. He only has Sepp Kuss left. While his rival has Majka, McNulty and the Catalan Marc Soler to surround him and help him in the big ports.

The Slovenian has the question that he has suffered in the colossi of the Tour that he did not know, such as Mont Ventoux in 2021 and this year in the Granon. Now Val Louron (in the Peyragudes stage) and Aubisque –the hardest pass according to the great climber Federico Martín Bahamontes-, the new Spandelles –watch out for his little road- and Hautacam –where Riis, Vingegaard's compatriot, ended the era by Miguel Indurain- are presented to him as a double-edged sword. If he manages to scratch at least a minute in these three Pyrenean stages that will be judges of the race, the double champion has the last card to turn the general overturn in the 41 km of the Rocamadour time trial.

Four times in the last 35 Tours, the Tour changed hands in the last time trial: the famous one from Lemond to Fignon already in Paris, for only eight seconds in 1989, the American repeated a year later with Chiapucci, in 2011 Cadel Evans snatched him the yellow to Andy Schelck and in 2020 Pogacar himself frustrated his compatriot Roglic on the Planche des Belles Filles to win the first of his two Tours.