From Heysel to the Lima tragedy, death in soccer stadiums

The tragedy in Indonesia has revived some of the most tragic events that have occurred in football venues. 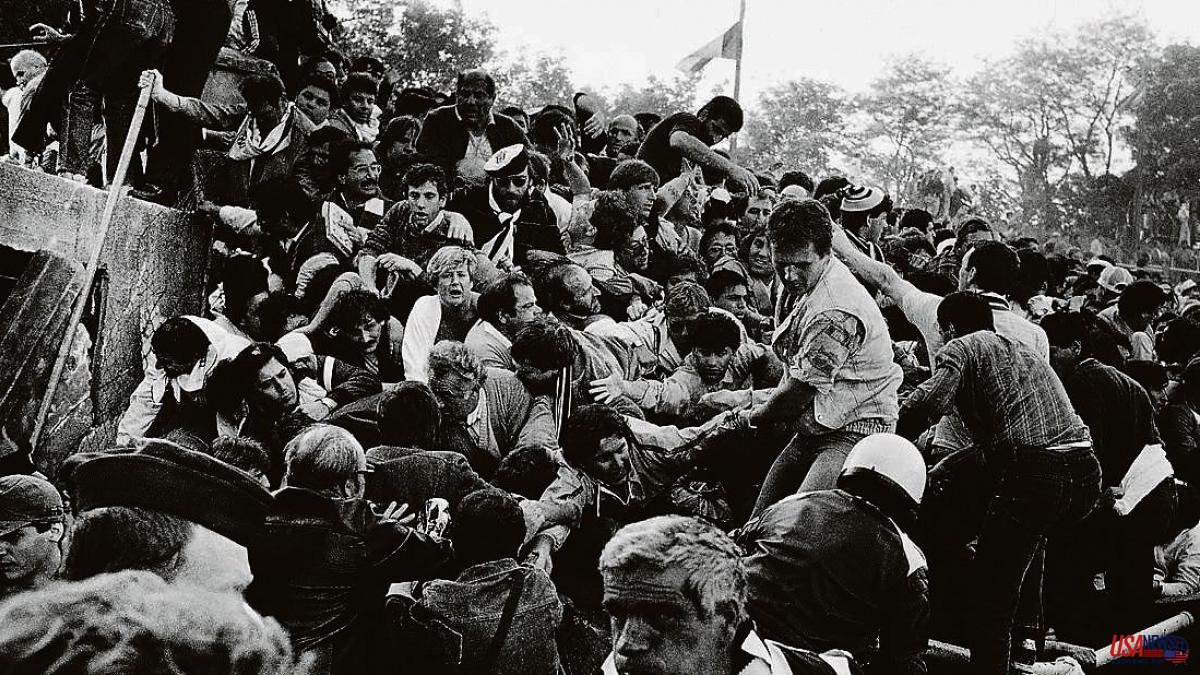 The tragedy in Indonesia has revived some of the most tragic events that have occurred in football venues. Those that follow are not all those who had to count more deaths, but they are three highly significant cases.

May 24, 1964 happens to be the date of the deadliest episode in the history of football. It happened in Lima (Peru). The youth teams of Peru and Argentina faced each other in a qualifying match for the Tokyo Games. The albiceleste advanced on the scoreboard and then tied Peru. But the goal was annulled by the Uruguayan referee Ángel Eduardo Pazos due to a lack of local striker Víctor Kiko Lobatón. From here, the fuse of some incidents that ended with at least 328 dead and more than 500 injured was lit.

A fan, nicknamed the Negro Bomba, accessed the pitch with the intention of attacking the referee. He was arrested by the police. But then another fan appeared ready to hit the referee with the neck of a glass bottle. The referee, frightened, decided to end the game.

This decision provoked the anger of an important sector of the public and it began to rain chairs, bottles, stones and other thrown elements. At the same time the wooden stands were set on fire. The appearance of the flames made many fans throw themselves onto the grass. The police released the dogs and began using tear gas, which led to a general rout. Amid numerous footsteps and massive avalanches, thousands of fans headed for the exit doors, but many of them, especially in the north end, remained closed and did not open.

The incidents multiplied for several hours outside the stadium. Buses, private vehicles and urban furniture were set on fire, victims who lay inert on the ground were looted and offices, churches and other buildings were vandalized by the hordes. The police tried to quell the chaos with a clean shot, which led to a higher number of deaths. Demonstrations against the forces of order were formed at the gates of hospitals.

El Negro Bomba, a well-known barra brava of the time, was arrested two days later along with 50 other people. Meanwhile, Commander Jorge de Azambuja, the person in charge of the stadium's security and the one who gave the order to throw tear gas, received a 30-month sentence. “I told the policemen to use the tear gas canisters. I never imagined the dire consequences,” said the commander. After the incidents, the pre-Olympic tournament was suspended and Argentina, proclaimed champion.

Unfortunately, various tragedies that occurred on a football field had more deaths than the one that occurred on May 29, 1985 at the Heysel stadium in Brussels. But it is one of the most impressive, if not the most. Liverpool and Juventus met in the European Cup final. In theory the two hobbies should be separated in the stands. Liverpool fans occupied two zones in one of the funds, zones X and Y. A third sector, Z, had to be neutral because the tickets corresponded to the Belgian federation. But resale came into play and a couple of thousand of those seats ended up in the hands of Juventus fans. Between the X and Y zones and the Z just a small separation fence. Nothing that couldn't be crushed to the ground if hundreds of fans stormed in. An hour before the time set for the start of the match, English fans began to charge against the towns where Juventus fans were. They came and went, struck and retreated and generated avalanches. The presence of the security forces at the time and in that sector of the pitch was minimal and the Liverpool fans could not be subdued. Then it was said that they wanted revenge because in the European Super Cup they had felt mistreated in Turin. The supporters returned the police charges and ended up jumping the fence. The juventinos no longer had escape. Cement walls prevented them from escaping. One of them was the one that collapsed and caused the tragedy.

Abundant bodies fell into the void. Sector Z became a hellish mousetrap in which 39 people lost their lives and in which more than 600 were injured.

Nothing like it had been seen in a match of such importance and before the eyes of the television audience. Who wanted to play it with dead people on the grass? Well, the meeting was not suspended. UEFA argued that the security forces had advised the match to not turn Heysel into an even bigger battlefield.

Finally, at 9:37 p.m., more than 90 minutes late, a match began that should never have been held. Juventus prevailed with a penalty goal from Platini after Boniek was brought down outside the area. The French celebrated it and the champions were not even deprived of the Olympic lap.

It was not the tragedy with the most deaths in a stadium on the African continent, but it was one of the most notorious for also having a political component. You have to go back to an Egyptian championship match between Al Masry, faithful to the postulates of the Hosni Mubarak regime, and Al Ahly, whose followers passed for sympathizing with the Arab Spring, in search of signs of openness and reform in the country . The match, played on February 1, 2012, already started half an hour late due to an invasion of the field by local fans. The scenes of supporters bursting onto the pitch were repeated in the second half after each of Al Masry's three goals.

Things were already looking bad but they weren't happy with this and at the end of the game a large group of local supporters returned to the pitch, in this case to go to where the visiting fans were.

There they went to attack them with sticks, knives, fireworks and other weapons. The affair resulted in 74 deaths. Most of them perished because the police refused to open the gates of the stadium, trapping Al Ahly fans, who did not know where to turn, in the ensuing avalanches.

The coach of Al Ahly, Manuel José, and some footballers were also brutally attacked. The news of what happened in the stadium generated a wave of indignation in Egypt and the incidents lasted for ten days in the main cities of the country. Meanwhile, the authorities suspended the Egyptian league for two years. Manuel José had it clear. “This massacre was orchestrated. There was a banner that said 'we are going to kill you all'. There were more policemen sitting and doing nothing than on the lawn protecting our people”, denounced the technician.

A total of 73 people were declared suspects in the episode, including nine policemen, and 47 of them were convicted. On January 26, 2013, when it became known that the court recommended the death penalty for 21 defendants, the protests were repeated and another 31 people died.