The president of the PP, Alberto Núñez Feijóo, claims to have detected concern in the European conservative leaders about the weak situation of the Government of Pedro Sánchez, a government, he said in statements to the press in Rotterdam, where he is attending the congress of the European People's Party ( PPE), "unprecedented in the European Union", which is supported by a "populist left-wing formation, which has its base in the communist party". 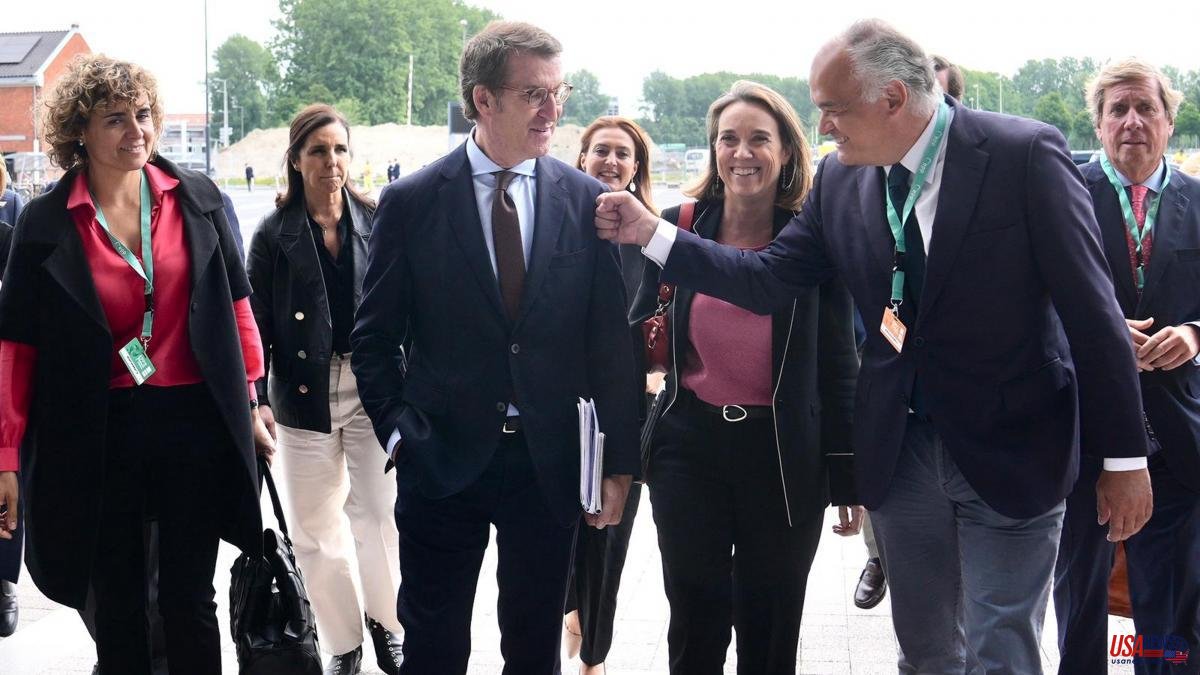 The president of the PP, Alberto Núñez Feijóo, claims to have detected concern in the European conservative leaders about the weak situation of the Government of Pedro Sánchez, a government, he said in statements to the press in Rotterdam, where he is attending the congress of the European People's Party ( PPE), "unprecedented in the European Union", which is supported by a "populist left-wing formation, which has its base in the communist party". And a government that "is based on the independentistas", something that the European leaders do not understand "that a nation is governed by those who want to end that nation".

Núñez Feijóo, who will speak for the first time tomorrow before the plenary session of the EPP congress, will hold 13 bilateral meetings over the two days that he will be in Rotterdam with the different leaders of the European parties that are part of the EPP, including with the president from the European Commission, Ursula Von der Leyen; with the President of the European Parliament, Roberta Metsola; with the prime ministers of Morocco, Greece, Croatia and Romania, as well as with the former Polish president and until now president of the EPP, Donald Tusk, and with the one who will occupy his post from now on, Manfred Weber, who will be second in the PPE to Spanish Esteban González Pons.

In declarations to the media, in Rotterdam, Feijóo that the European leaders do not understand that the Government of Sánchez approves a law and that later part of that government does not endorse it in Parliament; that the Government organize an event to commemorate the 40th anniversary of Spain's entry into NATO and that part of the Government not attend the event because it is against NATO, and say so one month before the Government is going to receive the NATO leaders at the summit to be held in Madrid.

Feijóo went further and took the opportunity to make a rosary of all the issues that the PP criticizes the government, such as "keeping price growth unbridled, a debt that mortgages the competitiveness of the Spanish economy", and all the economic, institutional problems and territorial that the popular ones habitually denounce.

According to Feijóo, the message that he is transmitting to the European leaders of the EPP is that "Spain is stronger than its government", and that the PP "is prepared to present an alternative" because it is "a government party that has governed Spain in very difficult times" both economically and territorially.

Feijóo's promise to his European colleagues that he is willing to "incorporate Spain into useful policies" in order to have "healthy growth" and comply with the commitments with the rules of the Union. And everything, he said, from "moderation, political pragmatism and Europeanism", to "reassure the EU about the shadows and shocks" that the Sánchez government transfers.

Asked about Podemos's complaint that the NATO event held yesterday by the Government, with the presence of King Felipe VI and the Secretary General of NATO, Jens Stoltenberg, that 37 million euros had been spent in the event had "finger-awarded", the president of the PP was surprised that a part of the Government accused the Government of "prevarication" and "attributed a crime" to it, something that he is sure that the European leaders will not understand either. "This government is impossible to explain to the colleagues of the PPE", he sentenced.

Regarding his meeting with the Prime Minister of Morocco, Aziz Ajanuch, Feijóo underlined that the Moroccan government knows that the PP "is reliable, it will carry out a reliable foreign policy with Morocco, that we are not going to be disloyal, and that we will try to rebuild a foreign policy based on on confidence and parliamentary consensus".

"Our alliance with Morocco is unquestionable," said Feijóo, who assured that the Moroccan government knows that with the PP in government there will be no events such as "the illegal entry of the leader of the Polisario front in Spain", nor will decisions be taken against part of the government".

What Feijóo did not want to reveal, in statements to the press, is the PP's position on the Sahara that he would have transmitted to the Moroccan prime minister, and limited himself to pointing out that the Sahara issue "cannot be solved with a clandestine letter." In the PP's position there will be, he said, "light, stenographers, and parliamentary consensus."