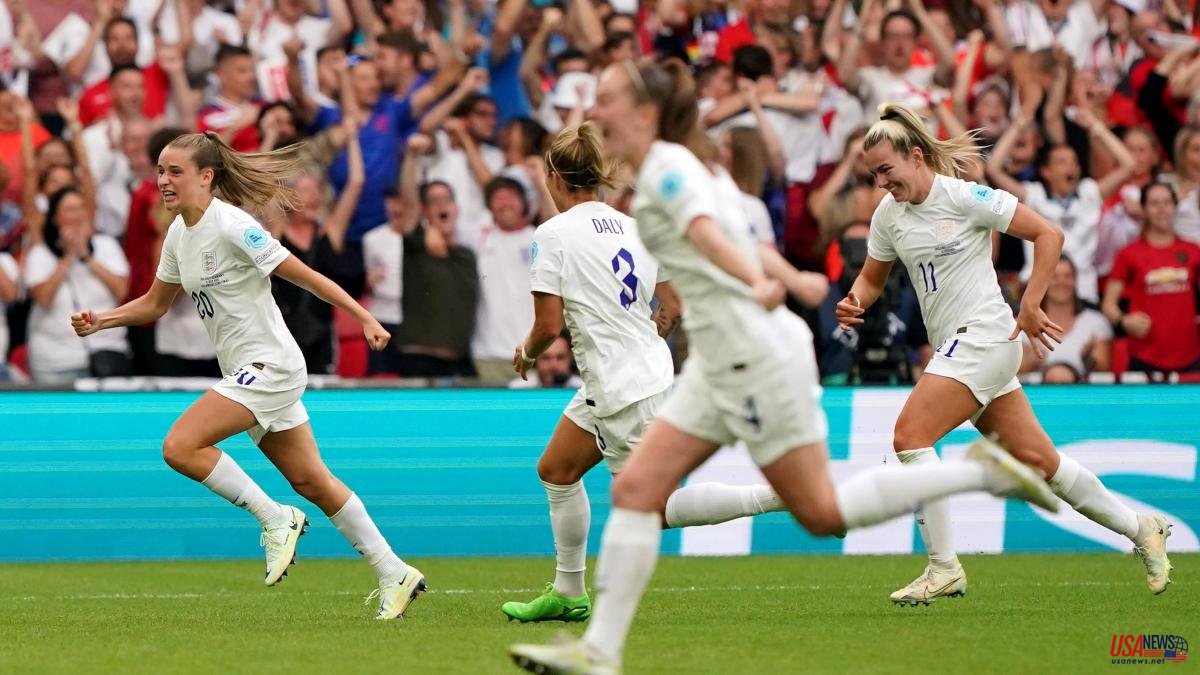 England achieved their dream final. Not even the best of screenwriters could have written such a perfect story. A fairy tale that culminated at Wembley after beating Germany, the most successful team in the history of the European Championship, in a match that had to wait to be resolved until extra time. An epic final for the Lionesses, who won their first continental title after beating the German team 2-1.

In the European Cup of records -attendance, audience...- the final could not be an exception and Wembley registered the largest entrance to a women's football match in the United Kingdom, and the largest in a European Cup final, both male, as feminine. 87,192 spectators witnessed the final in the legendary London stadium, which did not fit a single pin, surpassing the 80,203 spectators who watched the gold medal match at the London 2012 Games between the United States and Japan.

From early in the morning, waves of families and public of all ages were disembarking in the outskirts of Wembley to experience the final touch of a European Championship with which the British have connected from day one. The most mythical stadium in European football vibrated three hours before the match with the fans cheering on the players and, for the first time in history, there was a musical show before the match, by the British artist Becky Hill.

Germany's game was twisted before it started. Alexandra Popp, the most dangerous soccer player on the team and one of the top scorers in the European Championship, tied with Beth Mead (6), suffered an injury in the warm-up and her place had to be taken by Schüller. With the opening whistle, Wembley was a real pressure cooker that you don't often see in women's football. Every time Germany touched the ball thousands of souls booed. And the hosts gave them reason to believe, within three minutes Kirby had finished off the Froms goal. But the experienced Germany would not be intimidated and also had their chances in a hectic first few minutes of action-packed play. Bronze saved a dangerous shot from Rauch in defense and little by little England became more dominant, pushed by a totally dedicated crowd. Germany did not give up and was about to score at the exit of a corner that Earps rejected, in a play that was reviewed for a possible penalty by the hands of Leah Williamson, but that would come to nothing. The hosts would still have one more before the break when White inexplicably shot over Frohms's goal with a free-kick from the penalty spot.

Germany came out with one more march in the second half. Swapping Wasmuth for Brand gave him more of a lead on the ball and he enjoyed his best chances, but Wiegman reacted quickly and once again showed his great reading of games. He ushered in Russo and Toone, the heroines of England's major wins at this European Championship, and reaped the rewards in less than ten minutes, when Ella Toone pierced Frohms' goal with a stunning goal. A goal with which Wembley unleashed all the tension accumulated during the previous 66 minutes and began to sing It's coming home, the most repeated anthem. Down on the scoreboard, Germany had no choice but to take a step forward and go for the game and after much insistence, in the 79th minute Magull managed to tie the game with a shot over Earps and sent the game to the extension. In extra time, neither of the two teams seemed to want to go for the victory and fatigue took its toll. The stands held their breath, expectantly. Until the 111th minute, when Chloe Kelly appeared to unleash the madness by finishing off a corner shot by Hemp at the back of the net, sealing the first European Championship in the history of England.

For almost a month, the lionesses have been writing page by page the most brilliant chapter of their entire history. A path that began at Old Trafford on July 6 in a game in which the hosts did not show their best version against Austria, which they won by the minimum with a goal from Beth Mead. It wasn't the dream debut, but Sarina Wiegman's men more than rewarded the fans by scoring goals against Norway (8-0) and Northern Ireland (0-5) to complete an immaculate group stage. The first pages of this new chapter began to draw a promising story. And like any story, a dramatic twist is necessary in which things get complicated. This was without a doubt the quarter-final match against Spain, the rival that posed the most difficulties for the hosts. Esther González has been the only footballer, along with the German Magull, capable of beating Earp's goal and the Lyonesses were out of the European Championship until the 84th minute, when Toone forced an extension in which Stanway would score the 2-1 that would give the pass to the semifinals. The Sweden of the azulgrana Fridolina Rolfö was the last obstacle for England to access the final and resolved the procedure with authority. They resisted the first half hour in which the Nordics dominated, but they would end up thrashing with a stadium given over to their It's coming home and Sweet Caroline, the unofficial anthems of the English team. Two melodies that resounded like never before at a Wembley dedicated to its heroines.

And in a good story, the great protagonists cannot be missing either, and England has several. In addition to the savior Chloe Kelly, one of the most acclaimed by the English is without a doubt the coach Sarina Wiegman, who has been able to repeat with the Lionesses the feat achieved with the Netherlands in 2017, giving the hosts the title. It is not the only parallelism with respect to the last European Championship. Lucy Bronze will emulate Lieke Martens and land in Barcelona with a European Championship under her arm after performing at a great level in this tournament.

“Tomorrow is not the end of a road, but the beginning of something very big”, pointed out the English captain Leah Williams in the preview of the match. And it is that, regardless of the sporting feat that the Lyonesses achieved yesterday, the terrain that has been conquered in this European Championship will point the way to all future generations.