Controlled the serious industrial fire in Cuba, although the risks persist

The serious fire at a fuel depot base in Matanzas (Western Cuba) was controlled this Wednesday, after almost five days of fighting the flames, despite the fact that risks still persist. 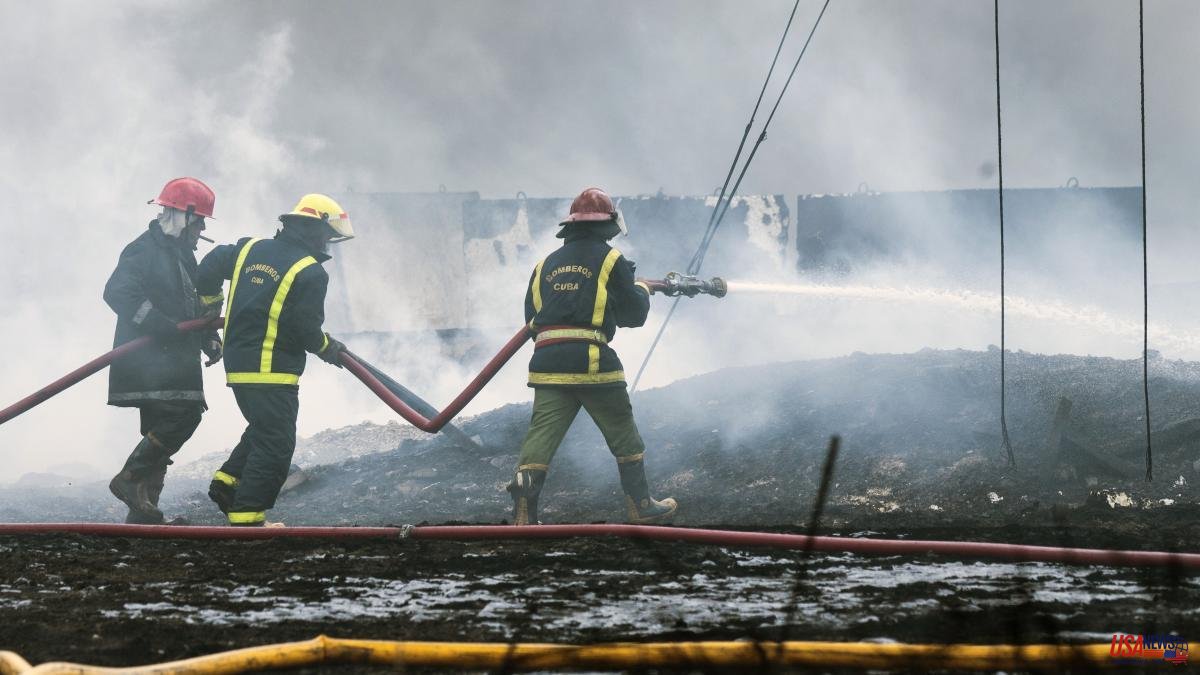 The serious fire at a fuel depot base in Matanzas (Western Cuba) was controlled this Wednesday, after almost five days of fighting the flames, despite the fact that risks still persist.

The biggest industrial disaster in the history of Cuba has so far left 1 dead and 128 injured (most already discharged, although 7 remain serious or critical), in addition to 14 missing. The economic damages assessment has just begun.

"We made progress in confronting the terrible fire in the Matanzas Industrial Zone. Yesterday was a day of victory, but we cannot trust ourselves. The danger is still latent," Cuban President Miguel Díaz-Canel wrote on Twitter.

In the four affected deposits -of a total of eight, of 50,000 cubic meters each- and their surroundings, some active points remain, where the emergency teams work.

According to the second chief of the Cuban Fire Department, Daniel Chávez, minor flames can persist for days, where the work will focus on cooling the area.

The landscape in that environment is one of absolute destruction: from the industrial infrastructures -starting with the collapsed tanks- to the brush, past several fire trucks, everything has been completely burned.

Rescuers from the Cuban Red Cross are beginning to access ground zero to try to extract the bodies of the disappeared, mostly firefighters who were extinguishing the flames in the first moments of the incident when a large explosion occurred.

Local authorities have explained that "a more favorable moment" has been created in the fight against the flames thanks to a more stable water supply and the creation of fire containment dikes. At this point they highlighted the contribution of the international collaboration of Mexico and Venezuela.

In total, 20 flights from these two countries have arrived at the scene of the incident, with 127 specialists, 45,000 liters of retardant foam, 8 breathable air tanks with armor, and more critical firefighting material.

The helicopters of the Cuban army, for their part, accumulate 240 downloads on the industrial park, of 2,000 liters each.

More than 4,000 residents of the neighborhoods closest to the industrial park continue to be evacuated, in the homes of relatives or in shelters improvised by the authorities.

The Minister of Public Health, José Angel Portal Miranda, reported that the health system has not registered "an increase in people with symptoms that could suggest damage due to environmental contamination" as a result of this disaster.

In this sense, the Minister of Science, Technology and the Environment, Elba Rosa Péreo, assured that the column of smoke has been reduced, that it is no longer visible in the radar images and that there is a tendency to improve environmental conditions" .

In recent days, the population of Matanzas and its surroundings have been asked to wear masks and avoid the rain.

The fire broke out last Friday, according to the first hypotheses, when lightning struck one of the eight tanks. The fire, impossible to put out, gradually spread to the adjacent warehouses.

An expert interviewed this Wednesday by the official media Cubadebate considered it "practically impossible" for the maintenance of the lightning rod system of the deposit base to be adequate due to the economic crisis.

In the following days, the flames affected four of these deposits, strategic for the country, causing serious explosions, with blazes of several tens of meters, and a column of toxic black smoke that reached Havana, more than 100 kilometers away.

The tanks mainly stored fuel for the country's thermoelectric plants, responsible for two-thirds of the national electricity production.

The Antonio Guiteras plant, adjacent to the site of the incident, had to stop on Monday as a collateral effect of the fire and was only able to return to operation this Wednesday.

Cuba was already in an energy crisis before this incident, with increasing blackouts throughout the country. In July, it registered power outages on 29 of the 31 days of the month, according to data from the Cuban Electric Union (UNE) collated by Efe.

The state power company foresaw an energy deficit of up to 30% of the country's maximum generation capacity for this Wednesday. On Monday he recognized that he was only going to be able to satisfy 60% of the needs at rush hour.