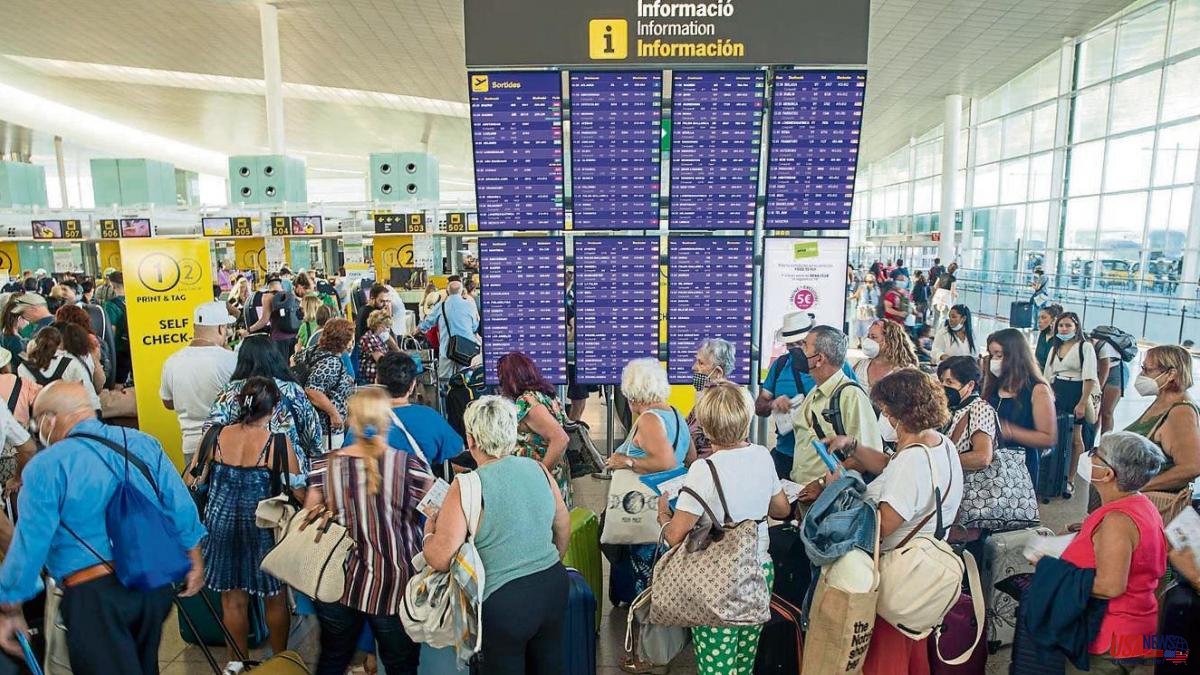 Late night flight from Düsseldorf to Barcelona. The crew is at its post and the passengers are on board, but the suitcases do not reach the hold of the plane. At the airport of the German city there is a monumental mess with the service that manages the baggage (handling), so the pilot has two options: either delay the trip and thereby alter the schedule for the next day (cancellations, delays... ), or fly without all the bags to El Prat. Choose the second. This scene – real, it happened a few days ago – illustrates how the air chaos in Europe jumps from one country to another and splashes passengers at the beginning of the holidays.

Traveling this summer is more expensive than before the pandemic and, however, the service is more precarious in half a continent. Since the holiday season began, not a day goes by without an airline announcing flight cuts, an airport asking to limit travel or images of long lines and piles of suitcases accumulated in the terminals. Labor unrest in the sector is also at an all-time high, with strike calls in Spain, the Nordic countries and France. The long-awaited return to normal tourism was not this.

And it is that the recovery of travel, faster than expected, has caught many airports and airlines off guard, with a huge shortage of personnel after the great cuts applied during the pandemic. Not all companies have laid off workers, but in aviation each of the links in the value chain influence each other. If there are problems at the Amsterdam airport (there are, and serious), the incidents will spread to other cities, especially with high saturation levels, as is the case. Result: flying around Europe looks like an obstacle course today.

Flight cancellation figures "are well above what is considered normal in the industry," says John Grant, director of research at OAG, a leading aviation consultancy. However, the earthquake has different magnitude depending on the country. The data provided by OAG indicate that Spain is among the European countries with the lowest number of suppressed flights (see graph). In fact, the figures are very similar to those of the summer of 2019, just a little higher. The situation today is stable at Spanish airports, managed by Aena, except for occasional incidents.

In the Netherlands and, especially, in Germany, the United Kingdom and France, it is different. The last full week (from June 27 to July 3, coinciding with the first major outbound operation) was catastrophic at the airports of these countries, major sources of tourists to Spain. More than 8,000 flights cut in Germany, more than 11,000 in France... These include all kinds of cancellations, from programming withdrawals to last-minute cancellations for various reasons. The lack of employees at airports and airlines is, however, the main reason that the numbers are so high this summer, says Grant.

The cancellation of flights involves passengers who cannot start their trip, the dreaded overbooking and chain delays. "Avoid Schiphol airport at all costs, even if you have to make seven connections to reach your destination," repeat passengers on social networks. Travelers have flooded the internet with Dantesque images of the Amsterdam hub, with queues outside that exceed a kilometer and crowds never seen inside. The Frankfurt airport accumulates complaints in the same way.

The massive flight cuts also mean less revenue for airlines that have yet to recover from billion-dollar losses from the pandemic, when governments forced them to screech to a halt. There is a pattern here, highlights Pere Suau-Sánchez, professor at the UOC and Cranfield University. Countries with liberal and less protective economic policies during the covid crisis now suffer more to recover quality air activity. To sample, a button: the equivalent to the Spanish ERTE in the United Kingdom, with a lower level of employment protection, ended in September 2021. In Spain, the Covid ERTE lasted until March 31, when the industry of the trips went back clearly. The first one has great difficulties in its airports and the mayor of London has even asked to relax the hiring rules after Brexit to bring employees from Eastern Europe. The British don't seem to want to work in the hold of the plane.

“Thousands of people have been laid off in ground services in countries like Germany, the Netherlands or the United Kingdom; ERTEs were applied in Spain and the recovery of workers has been less expensive than in these countries, ”says José Ramírez, head of the air sector at UGT Catalunya. Schiphol, one of the busiest airports in Europe, needs to hire 500 security employees and has 10,000 fewer workers than before the covid (58,000 in total) despite the fact that the level of activity is growing. Charles de Gaulle and Orly (Paris) have to cover 4,000 positions immediately, while during the pandemic their operators and airlines laid off some 20,000 people.

The United Kingdom will accelerate the procedures to hire employees, and the manager of the Frankfurt airport, Fraport, will incorporate 1,000 workers to reinforce handling services, although it will take up to three months to cover the 4,000 layoffs it made during the pandemic. In Spain, the Ministry of the Interior promised to allocate 500 more agents to passport control in the face of the immense queues that were generated in Barajas, El Prat, Málaga-Costa del Sol or Tenerife.

In short, the shortage of labor that is pushing the airline sector to the limit and embittering vacations is preying on the weakest in the labor chain. The main problem is not in the group of pilots, but in the cabin crew, the security and the ground personnel who take care of the bags, where the working conditions are more precarious and the services are usually outsourced. "It's physically hard work and conciliation is complicated," says Ramírez.

In Spain, the basic entry salary for employees of auxiliary handling services is 16,635 euros gross, while for management technicians it increases to 25,659 euros. The maximum salary in these two positions –as you go up a level– reaches 22,826 euros and 29,783 euros, respectively.

Before the pandemic, 40% of these employees in Spain were temporary. “We need reinforcements, more so now that the sector is very stressed; otherwise, the problems of other airports will end up generating a collapse here”, they warn from UGT. There has already been some outbreak of congestion with suitcases that arrive late from other airports to Barcelona and Madrid, as this newspaper advanced.

"This summer will be a challenge," underlines John Grant, from OAG, although he considers that the worst may be over. "The airlines -he continues- are readjusting their flight schedule to the available personnel resources, which will contribute to normalize the activity and avoid last-minute cancellations and inconvenience to passengers".

Meanwhile, travelers have no choice but to arm themselves with patience to enjoy the first vacation without restrictions in two years.