- What if my life has changed in the last year. 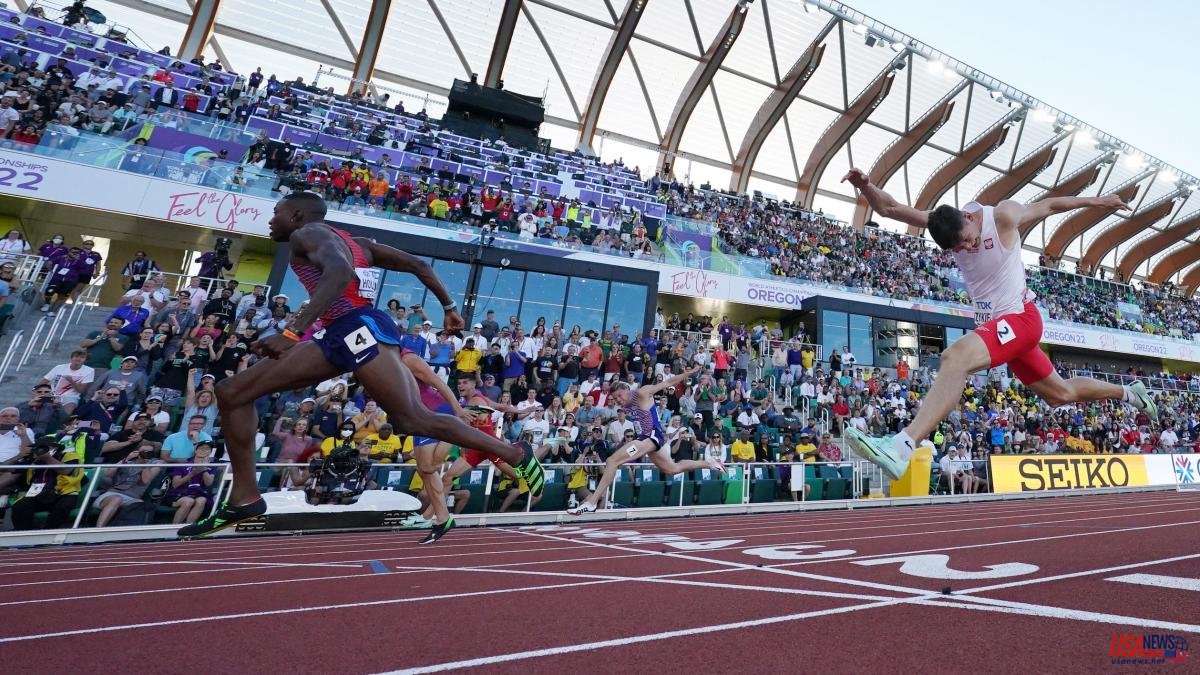 He is tall and a little skinny for the fences, he has nothing to do with the huge Grant Holloway (gold, in 13h03) or Hansle Parchment (the Jamaican is injured in the warm-up, he does not take the start; it takes forever to accept the verdict: the system says he has started at 0.099) or Devon Allen (disqualified for a false start), breasts table arms like clubs, all power with control, all forcefulness.

Asier Martinez is something else.

It does not matter: those tools are also worth it.

They are also worth, at least, to protect others.

These tools -subtlety, elasticity, technique- have established him as one of the benchmarks in contemporary high hurdles: this Sunday he won a bronze in Eugene, registering 13.17 seconds (five hundredths below his personal best) in his second grand final of a major championship, after sixth place at the Tokyo 2020 Games.

(He is already officially the heir to Orlando Ortega, Olympic silver in Rio 2016 and world silver in Doha 2019, absent in Eugene due to injury)

-And I admire him a lot, Orlando. And I consider him a spearhead in world athletics. Another thing is that he is not my technical model. He comes from the Cuban school; I, from the French one -says Asier Martínez.

When Asier Martínez says that his life has changed, he is going back to last summer. He is going to the Tokyo 2020 Olympic final, and his evolution in the last year.

-Now I am a professional athlete, and nothing more. The Games changed everything, he insists.

-The Games were my springboard. A sponsor appeared that allows me to live from this. I am one of the few lucky athletes.

-But doesn't that generate more pressure?

-Of course. Not everything is pretty. Sometimes being a professional can be a nightmare for me, but especially for my environment.

And he thinks about his adolescence, in the years immediately before the pandemic.

-After the 2020 pandemic, I abandoned activities typical of my age.

He talks about staying up late, about beers and sleepless nights. Of circumstances that can disrupt the performance of an elite athlete, one like him.

But he also talks about his studies, his Political Science career, the journeys between Pamplona -where he lives- and Bilbao -where he studies-, round trips that for years have absorbed hours and energy.

-Now I take everything online. That's what I've won, she says.

He also talks about his coach, François Beoryngian, a former high jumper (2.20m), the kind of athletic father for Martínez, the coach who on Thursday, several days later than usual, weighed down by visa problems, landed at the Portland airport and then hopped on a bus to Eugene to tuck in her athlete.

The final is a roller coaster of events.

Hansle Parchment suffers a muscle injury in rehearsal, while leaving heels and, limping, leaves the stage. Then Devon Allen breaks down, local idol, the hurdler who flirts between track and field and American football. He starts at 0.099, one thousandth below the regulation time, and the judges hesitate, and call him and call him again, and in the end they knock him down.

-Seeing that Devon Allen was leaving, I made calculations and I said to myself: 'it can' -says Asier Martínez, who passes through the mixed zone after having climbed on the podium, and that in that guise, with the medal around his neck, attend to special envoys. The truth is that there have been many circumstances that have favored me, many casualties, many injuries or the null start of Allen. But it doesn't matter, that had to be taken advantage of, and it's not always that simple.

Asier Martínez is isolated, down the eighth fairway, and on top of that he touches the first fence and loses a few thousandths, but he calms down in the vertigo and the shouting of Hayward Field, and finds his pause and stays in the fight while Holloway, colossal, advances In the center.

And finally, it explodes when it reaches the finish line.

"That's where I saw it," he says, "when I turned my eyes towards the center and I realized that it was going to be bronze. And it is a unique moment. If sixth place in Tokyo had already changed my life, this will do it even more. How will do? I don't know, I'll find it.