Out of power in D.C. and most states, Democrats struggle to preserve Medicaid funds

Democratic governors came to Washington Saturday in an unusually weakened position.There are only 16 of ‘em. They don’t control Congress or the White House. And they are eager to preserve the expansion of Medicaid, the health care program for lower income... 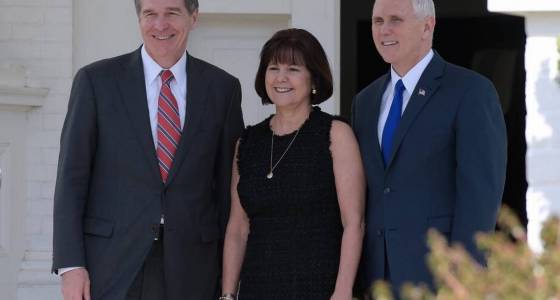 There are only 16 of ‘em. They don’t control Congress or the White House. And they are eager to preserve the expansion of Medicaid, the health care program for lower income people.

Some are turning to a public relations strategy. Some, such as North Carolina Gov. Roy Cooper, are pushing a plan to expand his state’s Medicaid program by using some money from healthcare providers.

The states can’t be left holding the bag when it comes to healthcare.

“What we’re doing is raising the ire of Americans – both Republicans and Democrats ... Even Republicans (lawmakers) are understanding a tornado is headed their way. Sometimes you have to feel the heat to see the light,” said Washington Democratic Gov. Jay Inslee at the National Governors Association 2017 winter meeting in Washington, D.C., on Saturday.

Democrats say they’re relying on voters who have acquired health insurance coverage under the programs – many for the first time – to help them pressure Trump and Congress.

Nearly 11 million people gained Medicaid coverage under the Obama administration’s expansion, but many Republicans have opposed the expansion.

While other Democrats on Saturday railed against Republican threats to Medicaid, North Carolina Gov. Roy Cooper, a Democrat, was more soft-spoken.

“People are hungry for leaders who are willing to put the political rhetoric aside when it comes to making public policy,” he said.

Cooper, who campaigned in 2016 on expanding Medicaid coverage in North Carolina, is worried a new funding formula would leave states having to pay more.

“The states can’t be left holding the bag when it comes to health care,” Cooper said in an interview with McClatchy.

Cooper succeeded Republican Gov. Pat McCrory, who, along with the state’s Republican-controlled General Assembly, refused to expand Medicaid under the Affordable Care Act.

Now, Cooper’s plan for expansion is tied up in the courts and Trump’s Department of Health and Human Services is unlikely to act on North Carolina’s request until Congress deals with the broader question of the Affordable Care Act, which Republicns are eager to repeal.

Cooper said he plans to discuss the issue with Health and Human Services Secretary Tom Price while he’s in Washington. The governors’ meeting ends Monday.

600,000+ North Carolinians would gain Medicaid coverage under an expansion

Republican proposals to change the Medicaid funding formula has been pitched as a way to give governors more control over who qualifies for coverage and out-of-pocket patient expenses.

Republican Gov. John Kasich of Ohio and six others have a Medicaid proposal that would give states flexibility with program specifications while leaving the federal government liable for most costs, according to a report from the Associated Press Saturday.

President Donald Trump has said he’d consider turning Medicaid into a block grant or fixed dollar amount program for each state. Such a change would likely decrease federal spending on Medicaid and has yet to garner full support from Republican governors or those in Congress.

On Friday, Cooper said, he and other governors, including Republicans, met with Vice President Mike Pence. Cooper said he reminded Pence that he took advantage of federal funding to expand Medicaid coverage while governor of Indiana just two years ago.

I don’t think it can be constant all out war with the president and the federal government.

As his party faces an uphill battle nationally, Cooper has an especially difficult situation at home: the North Carolina legislature has enough Republicans to override his vetoes. Most of the state’s elected Council of State positions, like treasurer and education superintendent, are held by Republicans.

Republicans in the General Assembly have already taken steps to weaken Cooper’s power as governor. Those “high-profile disagreements” exist, Cooper said Saturday, but he said he’s still working with Republican lawmakers. In particular, he said, conversations are ongoing about job creation and recruiting industry.

Cooper said he hopes political fights in North Carolina and with the federal government don’t continue to end with lawsuits. Already, the state of North Carolina is one of 16 states to file legal actions against the Trump administration over the White House executive order to curb refugee admissions and prohibit some travel to the U.S. from seven Muslim-majority countries.

“I’d rather we try to find consensus and not have to go to court but sometimes when these steps are taken by those in power, the courts are the place where we can decide if we’re following the constitution,” Cooper said, adding that he favors strong vetting procedures for refugees but disagrees with anything resembling a “religious test.”

On health care, Democratic governors are gearing up for a fight but Cooper pledged to find ways to work with Trump and Republicans, specifically naming plans to improve infrastructure.

“I don’t think it can be constant all out war with the president and the federal government,” he said.