Who would win a baseball version of the Oscars?

PORT ST. LUCIE — It’s time for the annual Baseball Oscars, and rest assured, we won’t screw things up at the end.(For those new to this drill, we take the Oscars categories and apply them to what transpired in Major League Baseball over the past year.... 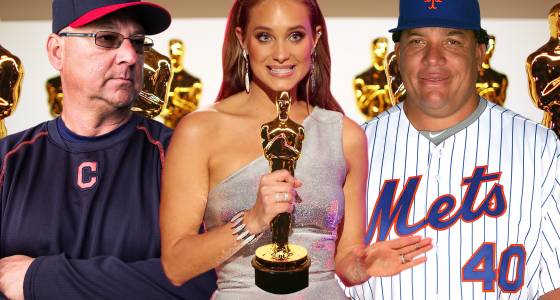 PORT ST. LUCIE — It’s time for the annual Baseball Oscars, and rest assured, we won’t screw things up at the end.

(For those new to this drill, we take the Oscars categories and apply them to what transpired in Major League Baseball over the past year. I skip “Best Documentary” and “Best Documentary Short” because I have never figured out how to convert those into baseball. Any questions?)

In the order that the awards were presented Sunday night:

Makeup and hairstyling: A tie between the Mets’ long-haired power arms, Jacob deGrom and Noah Syndergaard. DeGrom had his hair hat giveaway last year, and Syndergaard will have his in May.

Costume: The White Sox’s uniform history is rich and wonderful, but whoever came up with the late 1970s version deserves special recognition. Those unis upset Chris Sale enough that the ace tore them up hours before a scheduled start and earned a brief suspension. Now that Sale is on the Red Sox, he needn’t worry about encountering those uniforms again.

Sound editing: Like many, I hate that baseball has turned the underrated drama of the intentional walk into a formality. But I am appreciative that there is talk about limiting replay reviews to two minutes, something desired since last year. That would be sound editing.

Sound mixing: The Mets were absolutely decimated by injuries last year. That they managed to grab a National League wild-card slot is a tribute to their sound mixing of resources – youngsters such as Robert Gsellman, Seth Lugo and T.J. Rivera; the money required to add players such as Jay Bruce, Kelly Johnson, James Loney, Jose Reyes and Fernando Salas; and the trade chips sent to get guys like Bruce and Johnson in trades.

Foreign language film: Cubs young star Javier Baez, a Puerto Rican native, showed off his athleticism as he earned co-Most Valuable Player honors with Jon Lester as the Cubs defeated the Dodgers in the NL Championship Series to reach their first Fall Classic since 1945.

Animated short film: Hard-core Yankees fans will not soon forget the trio of Dellin Betances, Andrew Miller and Aroldis Chapman blowing opponents away with cartoonish fastballs and sliders and keeping the club on the periphery of the playoff race…for three months. Then the Yankees intelligently decided to trade Chapman and Miller.

Animated feature film: The Red Sox’s offense, in leading the industry with 878 runs scored, featured seven of nine regular players with an OPS+ above the league average. Retiring David Ortiz — whose animated antics charmed Beantown for 14 seasons – led the way at 162.

Production design: The Cubs won their long-awaited title before completing the renovation of Wrigley Field. But they’ve come a long way in modernizing their ancient home. Check out their home clubhouse.

Visual effects: How about the skies opening up as the Yankees were honoring Alex Rodriguez in his final game? I challenge any studio to duplicate that.

Film editing: Padres general manager A.J. Preller earned an unusual one-month suspension when he was found guilty of editing his players’ medical files in order to boost their trade value.

Live action short film: Remember when Colorado’s Trevor Story burst out of the gate last year, convincing the Rockies to release the suspended Jose Reyes? He couldn’t maintain that pace and got injured. Let’s see if he can stay healthy and produce over a full 2017.

Original score: Cubs 8, Indians 7 (10 innings). Throw in the rain delay, and few will forget this night and its result.

Original screenplay: The Yankees leading the charge as trade-deadline sellers? That is nothing we had seen, ever.

Adapted screenplay: The Blue Jays lost the ALCS for the second straight season. Yet given that they had missed the postseason from 1995 through 2014, they should be encouraged by their progress.

Directing: The Ricketts family purchased the Cubs in 2009, and Tom Ricketts took charge, hiring Theo Epstein to run his baseball operations in the fall of 2011. It’s easy to forget, given what has transpired since, that Epstein’s Red Sox were coming off a massive collapse. But Ricketts gave Epstein virtual carte blanche to execute his vision, and now the Ricketts family — and Tom Ricketts specifically — will be eternally lionized in the Windy City.

Best actor: Epstein became the brightest star of the Cubs’ jinx-ending triumph. It’s still unfathomable to think that one person oversaw both the Red Sox’s first title in 86 years and the Cubs’ first title in 108 years.

Best actress: Kate Upton should get commission from the Baseball Writers Association of America. Justin Verlander’s fiancée brought a truckload of attention to the AL Cy Young Award race when she profanely protested, via Twitter, the victory of the Red Sox’s Rick Porcello over Verlander.

Best picture: “The Founder,” written by my college classmate Rob Siegel, portrays Ray Kroc, the man responsible for successfully franchising McDonald’s (but not the founder) who went on to own the Padres. Kroc, furthermore, is portrayed by the always-awesome Michael Keaton — who played a character named “Gene Mauch” in “The Other Guys.” Keaton absolutely deserved a nomination.

This week’s Pop Quiz question came from Gary Mintz of South Huntington: In an episode of “Our Gang,” what city does Donald Haines describe as “first in war, first in peace and third in the American League”?

While you think about it, in the spirit of “Our Gant,” here’s the legendary “Who shot Buckwheat?” bit from “Saturday Night Live.”

— The Pop Quiz answer is Washington. If you have a tidbit that connects baseball with popular culture, please send it to me at kdavidoff@nypost.com.