What to make of Yankees' Bryan Mitchell, Luis Cessa having perfect first outings

TAMPA -- There are no favorites for the openings in the Yankees' starting rotation, manager Joe Girardi has been saying, and while I don't totally buy it, this five-righties-or-two-spots competition is at the very least wide open. For the first time,... 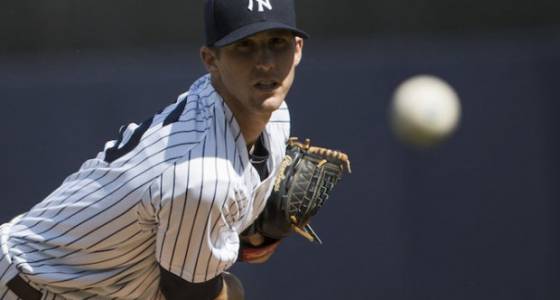 TAMPA -- There are no favorites for the openings in the Yankees' starting rotation, manager Joe Girardi has been saying, and while I don't totally buy it, this five-righties-or-two-spots competition is at the very least wide open.

For the first time, I'm starting to wonder if this crapshoot can get exciting.

Spring training success builds hope, and that's what two of the starting contenders gave Yankees fans on Friday in a 9-4 Grapefruit League-opening win over the Phillies.

Bryan Mitchell started for the Yanks and set down six Phillies in a row, and Luis Cessa did the same with a six-up-and-six-down showing when pitching the fifth and sixth innings.

Two perfect innings in late February doesn't mean much, but this was a little reinforcement that the good outings each provided late last season was a sign that these fellows are ready to be effective major league starters.

Here's my early hunch of how the Yankees would like to see this play out.

The way I see it, they want Luis Severino to win a spot because he has the most upside ... ace upside. I'm also thinking Mitchell is whom they want to win the other spot for a bunch of reasons:

Mitchell was having a great spring mostly as a starter in 2016 before a final-outing foot injury killed most of his season ... Mitchell pitched well enough in five starts last September to post an outstanding 3.24 ERA ... Adam Warren is more valuable as a jack-of-all-trades reliever ... Chad Green and Luis Cessa, the least experienced of the candidates, could benefit the most from more Triple-A time.

"I think it's exciting," Mitchell said after his outing while standing in front of his Steinbrenner Field locker. "We're all pushing each other. But at this point in the game, I'm just really worrying about when my next game is."

Mitchell has the right mindset.

We won't really know who's in the driver's seat for spots until mid-March or so. That's when this competition officially begins, while now, according to Girardi, is about "their preparation for their later starts because you're going to be going through a lineup more than once and see more than six or seven hitters and you're going to have to use all of your pitches."

Mitchell and Cessa did all they good to impress Friday, and Girardi liked what he saw. Warren will get a chance to do the same Saturday when he starts the Yankees' game against the Phillies in Clearwater. Severino is scheduled to make his spring debut Sunday in Tampa in a start against the Toronto Blue Jays and Green probably will pitch in relief over the weekend.

"Obviously you don't want them to struggle early on, but they're not going to be as sharp with their off-speed (pitches) and probably won't have the same velocity as they will near the end of spring," Girardi said. "But you want to see them go out and compete and throw strikes, and that's what (Mitchell and Cessa) did. To me, that's a really good sign."

It's way early, but days like Thursday make you think that maybe the Yankees won't have to just fill out the bottom of their rotation with mediorce-at-best options that will be on short leashes ... that maybe a rotation that most everyone considers will be an Achilles can keep games close consistently.

Do that and maybe the Baby Bomber-filled 2017 Yankees can be pull a surprise and be a playoff team.