Man, do not run on #ElGary! Not even close. #Yankees pic.twitter.com/9RRGYkXhVM -- Sung Min Kim (@sung_minkim) February 26, 2017 TAMPA -- There was a Gary Sanchez sighting Sunday at Steinbrenner Field. The Yankees' second-year catcher put on his first show... 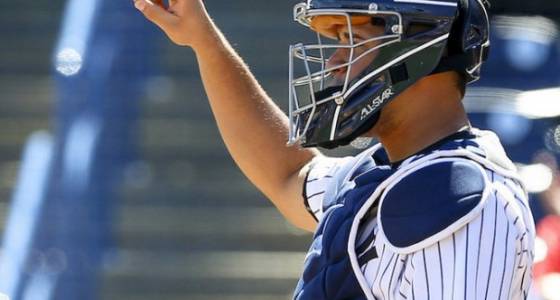 Man, do not run on #ElGary! Not even close. #Yankees pic.twitter.com/9RRGYkXhVM

TAMPA -- There was a Gary Sanchez sighting Sunday at Steinbrenner Field.

The Yankees' second-year catcher put on his first show of the spring not with his bat, but his throwing arm.

One of baseball's best throwing catchers, Sanchez gunned down two Toronto Blue Jays basestealers in the third inning of a Grapefruit League game.

With the Yankees leading 3-0, reliever Johnny Barbato replaced starter Luis Severino in the third, walked two of three innings in the inning and both were gunned down trying to steal.

Sanchez first threw out Jon Berti, who led off with a walk, then threw out Ezequiel Carrera, who had worked a two-out walk.

Sanchez became a national story late last season by hitting 20 homers in 52 games following an early August call-up from Triple-A, but he'd always also been known for having a very strong throwing arm.

It's very early, but Sanchez is off to a slow start at the plate so far this spring. He was 0-for-3 on Sunday, leaving him 0-for-6 in two games.